Clint Frazier, back with Iowa Cubs, determined to get back to majors

After the Iowa Cubs finished batting practice on the field at Principal Park Saturday, outfielder Clint Frazier grabbed his bat, got back in the cage and got in some more swings. Frazier who had already gone through some pre-game hitting, got some extra work in as the rest of his teammates retreated back to the clubhouse to get ready for Saturday's game with the Omaha Storm Chasers.

“There’s a lot of lost time that needs to be made up,” Frazier said. “Sticking after and doing that was something that I’m probably going to do pretty often if I can just because I need to make sure I’m ready every game. I don’t have time to sit around and hope it happens. I’ve got to make it happen.”

Frazier is determined to get back to the big leagues after he was surprisingly designated for assignment by the Chicago Cubs June 10 as part of a series of roster moves. The 27-year-old Frazier, once a big prospect in baseball, signed a one-year deal with the Cubs in the offseason. The hope was that he could provide depth in the outfield and possibly rejuvenate his career with some steady playing time. 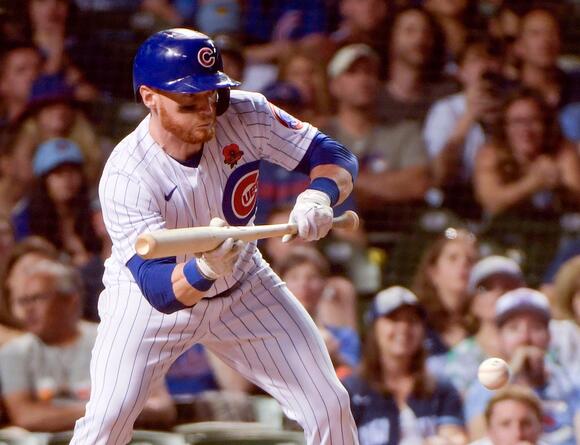 But that never happened.

Frazier missed part of the season when he went on the injured list after undergoing an appendectomy. After a brief stint with the Iowa Cubs as part of a rehabilitation assignment, Frazier returned to Chicago and showed some promise but hit just .216/.356/.297 with eight doubles in just 19 games with Chicago this season. Even with Chicago's roster ravaged by injuries, chances were hard to come by for Frazier who got just 37 at-bats. When the Cubs needed to make a roster move earlier this month, they decided to DFA Frazier.

"It's part of the game," Frazier said of the move. "I don't think that you think you should come into this job not expecting to get fired at some point because there's always other people that are performing or on their way up," Frazier said.

"Hits bring friends. So, I didn't have a lot of hits up there and therefor, I was the guy that had to go in order to create a roster spot from what I was told."

Frazier cleared waivers and had a decision to make. He could go to the minors or become a free agent. Frazier said he accepted his assignment so he could continue making his big-league salary. Plus, with limited playing time this season, Frazier figured there may not be many teams willing to give him a chance. So, Frazier not only accepted it but rushed back to the minor leagues, got into town Friday and was at the park Saturday getting in extra work.

"I think that my best option though was coming here and ultimately performing and putting myself and other people in a position to where maybe there's an opportunity that opens up to where I can finally get a full-time playing job because at-bats have been hard to come by the last few years for me," Frazier said. "So, in a way, this will be good to come down here and perform the way that I know I can. And hits bring a lot of friends. We'll see what I can do."

When Frazier finished his extra round of batting practice, he stayed on the field for a bit to chat with Iowa hitting coach Desi Wilson. While being in Iowa isn't the goal, Frazier is trying to make the most of the chance to play every day.

"I signed here because I wanted to be here," Frazier said. "And ultimately, I think that I'll be able to play enough and finally find my groove to where somebody says, 'Let's give this guy a couple hundred at-bats.' Because I can hit."

Frazier hopes those at-bats eventfully come with the Cubs. And if they don't, he knows others are paying attention to what he's doing.

Tommy Birch, the Register's sports enterprise and features reporter, has been working at the newspaper since 2008. He's the 2018 and 2020 Iowa Sportswriter of the Year. Reach him at tbirch@dmreg.com or 515-284-8468. Follow him on Twitter @TommyBirch .

This article originally appeared on Des Moines Register: Clint Frazier, back with Iowa Cubs, determined to get back to majors