Claude Lemieux is exactly what floundering Devils need in next leader

So the Flyers upped the ante; losing in the first round wasn’t good enough for Boston; Vegas is making yet another move for a (slightly tarnished) new toy behind the bench; Winnipeg (among others) is waiting on Barry Trotz ; the Islanders have made their move; Dallas is searching for a coach; Steve Yzerman is on the lookout in Detroit; there is an unusually large pool of available coaching candidates, but nope, the Devils are good, they’ll just stand pat with Lindy Ruff after another disastrous season on the ice.

Nine playoff misses in the last 10 years for an organization that left its championship pedigree behind at Exit 16W and possesses an apparent lack of will within ownership to address the issue, which might actually be ownership’s unwillingness to turn things over to an autonomous, independent-thinking hockey person who has a history of Stanley Cups on his résumé.

I would love to see what Claude Lemieux would be able to do with that New Jersey organization, which has amassed a rather fair amount of young talent, but continues to be far less than the sum of its parts and is an overlooked little brother in the NHL scheme of things.

Lemieux, an agent, has no front-office experience. But he has a lifetime of championship experience in the game, having won four Cups with Montreal (1986); New Jersey (1995 and 2000) and Colorado (1996). He has one of the more fertile minds in the game and has always recognized the importance of surrounding young talent with brick-layers.

If there were ever an organization in need of a shake-up, it’s the Devils. If there ever were a man to shake things up, it’s Lemieux.

John Tortorella, meanwhile, was always first on Philadelphia general manager Chuck Fletcher’s wish list, according to a well-placed source who had this hiring on his radar weeks and weeks ago. 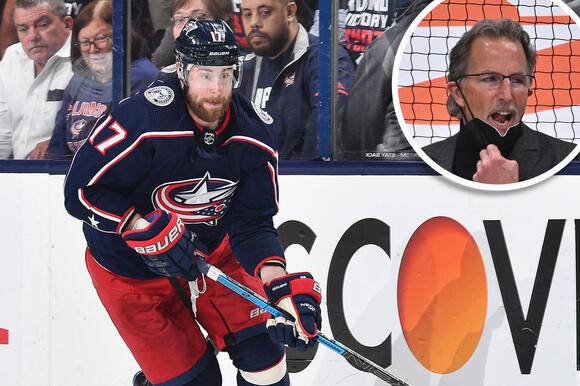 Perhaps the coach now makes two people in the world who believe that the Flyers can somehow “retool” themselves into contention without undertaking a significant makeover that goes beyond Tortorella’s demanding persona.

If there might have been concerns about Tortorella suppressing young elite talent in the wake of his appraisal for ESPN of the Ducks’ Trevor Zegras-Sonny Milano alley-oop, that’s no issue with the Flyers, who are essentially bereft in that area and are in desperate need of the same kind of course correction required in New Jersey.

Hey, there, how do you think Kevin Hayes, the antithesis of a Tortorella Type A personality and with only four years to go on his deal under which he is earning an average annual value of just under $7.143 million, is going to make out under this new regime?

The Blackhawks, in an apparent attempt to crater as quickly as possible, are seeking a trade partner for 24-year-old star winger Alex DeBrincat.

That is contrary to the organization’s apparent attempt to do a slow dive to the bottom a year ago by acquiring and then signing Seth Jones to an eight-year contract worth a cap hit of $9.5 million per.

And yes, after raising the issue early last season, I will raise it again now and probably not for the last time: What is Patrick Kane’s worth as a rental to our Rangers after the hockey club was shut down four straight times by Tampa Bay?

No, Jonathan Toews does not enter the discussion.

Again, there is a plethora of coaching candidates with experience, but NHL decision-makers should not overlook Marc Savard, who in his first season behind the bench guided Windsor (and Will Cuylle) to the OHL finals before going down to Hamilton in seven games.

We’re told that if Joel Quenneville applies to Gary Bettman for reinstatement following the coach’s actions/inaction in the Blackhawks’ Kyle Beach scandal and coverup and if that request is granted, the coach could well return behind the Panthers’ bench next season in the wake of the second-round sweep by Tampa Bay, in which the highest scoring team in the NHL recorded a sum of three goals.

And if not back to Sunrise, perhaps a move to Seattle if GM Ron Francis is willing to replace Dave Hakstol, who apparently has the first few weeks to a month of the 2022-23 season to solidify his job as head coach, and what is that?

That Red Wings roster, by the way, is screaming out for David Quinn to take over behind the bench. If not, then the one-time Rangers coach, whose work helped lay the foundation for this year’s leap, could well be the guy to lead the next generation of young Bruins, who, according to folks with some insight into the situation, were essentially abandoned by Cassidy.

And the young guys might not have been the only ones.

Wonder what Cam Neely and Don Sweeney, president and GM, respectively, of the B’s, would have to say about their own accountability if they’d been teammates with their executive selves back in the day.

But will a brave soul or two on the Conn Smythe voting panel cast a ballot for Connor McDavid, the playoff scoring leader in the clubhouse with a nine-point lead (33-24) over Kucherov entering Game 2 of the finals?

Indeed, McDavid, who recorded his 33 points (10 goals, 23 assists) in 16 games during Edmonton’s run to the conference finals, stands to become the first player in two decades to lead the playoffs in scoring without advancing to the Cup final, since Colorado’s Peter Forsberg pulled it off in 2002.

The moment the NHL permitted players on career-long LTI (long-term injured reserve) to be traded is the moment that enforcement of collective bargaining agreement circumvention became a joke.

Finally, keeping tabs because somebody has to do it, but the Penguins’ first-round defeat to the Rangers marked the 11th time in the last 12 years a team with Brian Burke in the front office failed to make it as far as the second round of the playoffs.

Surely this is the kind of information that was not readily available during Slap Shots’ recent hiatus.

The Islanders needed a scorer. Now they have one. Lou Lamoriello made the first big move of the NHL’s trade season late Monday night, acquiring Vancouver’s Bo Horvat for Anthony Beauvillier, Aatu Raty and a conditional first-round pick in the 2023 draft. Horvat, the Canucks’ now ex-captain who has already scored 31 goals with 23 assists this season, instantly becomes the biggest scoring piece the Islanders have on their roster. The price Lamoriello paid is a hefty one. Raty, who had just played his 12th NHL game with the club, was considered the organization’s best prospect and is in the first of...
12 HOURS AGO
New York Post

Can you watch Woody Allen play Fielding Mellish in that uproarious courtroom scene in the movie, “Bananas,” and laugh the same way you did before? Can you stomach watching a rerun of an episode of the television show, “Cosby?” Bobby Hull, one of the most legendary, charismatic and historically significant players in NHL history, passed on Monday at age 84 and it is entirely up to you whether to celebrate his hockey career even as it is impossible to honor his life. There is a preponderance of evidence that this was not an individual worthy of hagiography. He appears to have been...
9 HOURS AGO
New York Post

Philadelphia 76ers star guard James Harden didn’t get the memo in time. During the third quarter of Philadelphia’s 126-119 win over the Denver Nuggets, Harden forgot to check in after a timeout, leaving the 76ers with four men on the floor.  So, after realizing his mistake, Harden tried to sneak onto the court – and got hit with both the ball and a technical foul. The mistake aside, the 33-year-old guard put up 17 points and dished out 12 assists during the 76ers’ victory. Joel Embiid, who was snubbed from an NBA All-Star starter spot, carried his team with a monster game that consisted of putting up 47 points and grabbing 18 rebounds. With the help of its two stars, Philadelphia is placed second in the Eastern Conference with a 32-16 record.
PHILADELPHIA, PA・2 DAYS AGO
New York Post

Eli Manning laid out the rules for his 11-year-old daughter Ava when the duo trekked to Philadelphia earlier this month for the Giants’ Divisional Round playoff game against the Eagles. “Whatever you hear or see in Philadelphia, stays in Philadelphia,” Manning recalled during a recent appearance on “The Carton Show.” “You can’t bring that back to school. We don’t need you being expelled. Don’t do anything you saw and give those gestures to a teacher.” The Giants legend, 42, went into futher detail about his “interesting” visit to Philadelphia, explaining that Ava learned a few new gestures and words from Eagles fans. “She...
PHILADELPHIA, PA・13 HOURS AGO
New York Post

The Raptors understandably are setting a high price for two-way wing OG Anunoby ahead of the Feb. 9 trade deadline, but the Knicks don’t appear scared off yet by the potential return. The Knicks have “shown a willingness to offer multiple first-round picks” in a deal for the NBA steals leader, according to a report Monday in The Athletic. The 25-year-old Anunoby is averaging 16.9 points and an NBA-best 2.1 steals while shooting 36.6 percent from 3-point range in 35.8 minutes per game over 45 appearances for the Raptors entering their game Monday in Phoenix. The Suns are also among the teams...
NEW YORK CITY, NY・11 HOURS AGO
New York Post

YES Network is working toward offering its service direct-to-consumer by Yankees Opening Day at the end of March, The Post has learned. Here’s what you need to know: 1. While the aim is to be up and running by the time the Yankees face the Giants on March 30, YES won’t press go unless everything is lined up, so the start date could be moved. In late July, Yankees president and YES chairman Randy Levine said on WFAN’s “Carton & Roberts” that YES would have a DTC product “very soon.” 2. While a DTC offering would allow viewers to bypass cable and satellite...
1 DAY AGO