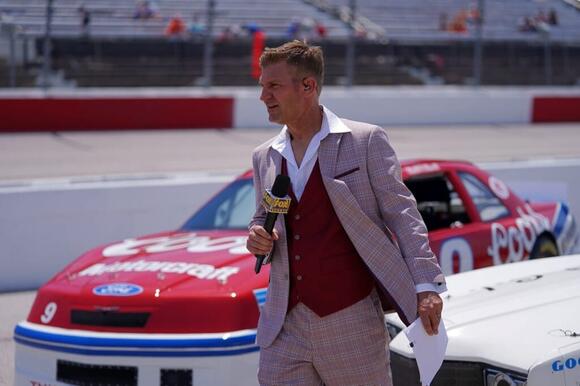 Multiple media outlets reported that, according to the crash report, Bowyer hit a 47-year-old woman as he drove onto a ramp off U.S. Route 54 on June 5.

The woman, identified as Mary Jane Simmons of Camdenton, Mo., was pronounced dead at the scene.

Bowyer immediately stopped his car when he realized what had happened, the police report said, and he was found to have no alcohol in his system.

Bowyer currently works as a NASCAR analyst for Fox Sports. He won 10 Cup Series races in his 15-plus-year career on the circuit and retired in 2020.

NASCAR schedule: Races today, this weekend, and how to watch

Go beyond the NASCAR schedule with the top races today, this weekend, where its happening, and how to watch the action. Updated daily!
MOTORSPORTS・17 HOURS AGO
Sportsnaut

JR Motorsports won't make the jump to the NASCAR Cup Series in 2023, according to Kelley Earnhardt. What did Earnhardt have to say about moving up in 2024?
MOTORSPORTS・2 DAYS AGO
Sportsnaut

NASCAR: A.J. Allmendinger ‘open’ to big return to the Cup Series in 2023

A.J. Allmendinger is "for sure open" to a return to the NASCAR Cup Series with Kaulig Racing if that is what Matt Kaulig wants him to do in 2023.
NFL・2 DAYS AGO
Sportsnaut

Get the latest NASCAR results, updated after every race, including laps led and many more stats. Bookmark and stay up to date with Sportsnaut.
NFL・17 HOURS AGO

The 2022 version of the NASCAR Cup Series playoffs are proving to be as competitive as any in recent memory.
MOTORSPORTS・2 DAYS AGO
Sportsnaut

FORT WORTH, Texas — Noah Gragson parked his No. 9 JR Motorsports Chevrolet at the finish line, emerged through his
TEXAS STATE・7 HOURS AGO