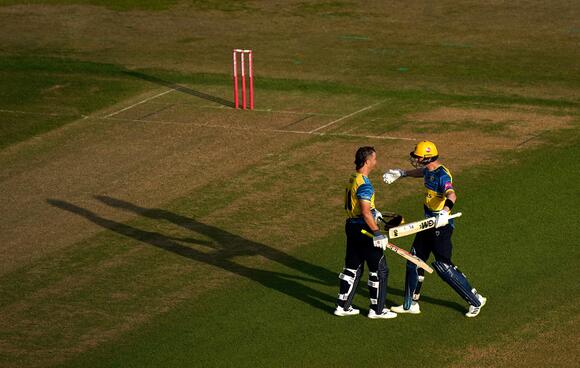 Only seven better scores have ever been posted in world T20 cricket, while Bears duo Sam Hain (112 not out) and Adam Hose (88 not out) shared a record third-wicket stand in this country of 174.

On a night where batters thrived across the country, Australian all-rounder Daniel Sams thrashed his maiden Blast half-century to guide Essex Eagles to their highest-ever total in the tournament in an 11-run win over Sussex Sharks.

Sams hammered 71 from just 24 deliveries, including six sixes and as many fours, as Essex racked up 244 for seven at Chelmsford on their way to a third victory in four games.

Mohammad Rizwan blazed 66 from 32 to keep the Sharks’ hopes alive before former Essex star Ravi Bopara bludgeoned a valiant 51 from 26.

But it was not enough as Bopara fell to Sams in the final over as Sussex reached 233 for six, with the match aggregate of 477 setting a new Blast record.

Sunil Narine smashed a 29-ball half-century as Surrey thrashed Middlesex by seven wickets to maintain their unbeaten start in the Vitality Blast.

West Indies star Narine hit four sixes in an unbeaten 51 in front of a 30,000 full house at the Kia Oval as Surrey made it seven wins from eight matches – plus a no result against Glamorgan – while Middlesex slumped to a sixth straight defeat.

Ollie Pope finished unbeaten on 37 as South Group leaders Surrey cruised to 158 for three in 15.1 overs in reply to Middlesex’s 155 for eight, with Narine and home skipper Chris Jordan both taking two for 27.

Cobb, dropped on nought, struck 57 off 32 balls, including three sixes as the hosts chased down a target of 154 with 22 balls to spare.

Adam Lyth’s onslaught was decisive as Yorkshire Vikings cruised to a comfortable 65-run win over Durham at Chester-le-Street.

Lyth blasted 81 from 46 balls and was well supported by Finn Allen and Tom Kohler-Cadmore – who both made 48 – as the Vikings made 201 for five before Durham were limited to 136 for eight.

Rilee Rossouw (54) and Lewis Gregory (60 not out) smashed rapid half-centuries as Somerset sealed a seven-run win against arch-rivals Gloucestershire at Taunton.

The hosts recovered from a slow start to run up 184 for six before restricting Gloucestershire to 177 for eight.

Ross Whiteley added a six-ball 23 to lift the Hawks to their third-highest T20 score of 221, a total the Spitfires never looked like chasing before falling 54 runs short in front of the largest Ageas Bowl crowd of the season.

Ben Mike (three for 20), Naveen ul-Haq (three for 22) and Callum Parkinson (three for 28) restricted the Rapids to a paltry 116 for nine and the Foxes cruised home with almost eight overs to spare, Arron Lilley smashing an unbeaten 68 from 38 balls and Nick Welch making 41 not out.

Hampshire pushed champions Warwickshire to the brink of relegation on the third day of their LV= Insurance County Championship clash at Edgbaston.Replying to the home side’s 272 for four declared, Hampshire made 311 thanks to James Vince (98) and former Edgbaston favourite Keith Barker (76).Warwickshire closed on 62 for two second time around – 23 ahead – but, after rain took out much of the first two days, a draw is overwhelmingly likely.That would secure a runners up spot for Vince’s side and send the Bears down.Yorkshire’s defeat to Gloucestershire at Headingley has given them a glimmer of hope but...
SPORTS・4 HOURS AGO
The Independent

Moeen Ali branded England’s Twenty20 batting a disappointment after they saw a second chase against Pakistan go off the rails in the space of four days.Having failed to make 167 in Karachi on Sunday, the tourists lost track of an even slimmer target as they were unable to make 146 at Lahore’s Gaddafi Stadium.Moeen did his best to drag the result back with a captain’s innings of 51 not in 37 balls but he lost a last-over battle of wills with debutant seamer Aamer Jamal, who secured a five-run win for his side.Phil Salt, Alex Hales, Ben Duckett and Harry...
SPORTS・1 HOUR AGO
The Independent

Stand-in skipper Moeen Ali came close to hitting England out of trouble at the death only to be bested by a debutant as Pakistan took control of the Twenty20 series for the first time.The hosts were bowled out for just 145 in Lahore, Mark Wood excelling again as he took three for 20 and hit 95mph, but an England batting line-up missing the likes of Jos Buttler, Jonny Bairstow, Ben Stokes and Liam Livingstone misfired for the second game in a row.Moeen took them within one blow of victory, hitting 51 not out in 37 balls, but newcomer Aamer Jamal...
WORLD・2 HOURS AGO
The Independent

‘Significant action’ needed as most of England still in drought

Significant action is needed to manage water levels as most of England remains in drought and could do so into next year, the Environment Agency has said.Areas classed as being in “prolonged dry weather” include Greater Manchester, Merseyside and Cheshire, and the North East.Last week, Cumbria and Lancashire moved to that status, as very dry soil means rainfall is taking longer to replenish groundwater and reservoir water levels.As of September 20, total reservoir stocks were at 52% of total capacity, the Environment Agency said.💧 Recent rainfall hasn't been enough to replenish groundwater and reservoir levels.11 out of 14 Environment Agency...
ENVIRONMENT・2 HOURS AGO

The peer who organised the Queen’s funeral will argue he should not be banned from driving because he needs his licence to arrange the King’s coronation, a court has heard. The Earl Marshal, the Duke of Norfolk, 65, pleaded guilty at Lavender Hill Magistrates’ Court on Monday to...
U.K.・2 DAYS AGO