Social Security: New Bill Could Give Seniors an Extra $2,400 a Year

By Vance Cariaga
GOBankingRates
3 days ago 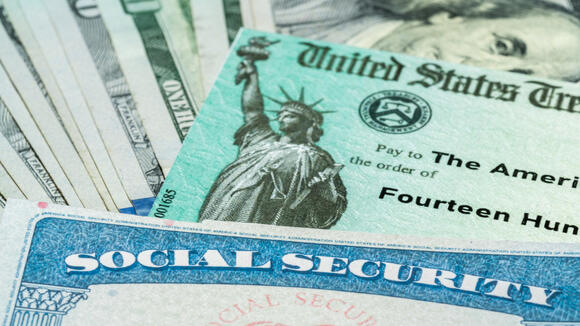 Social Security recipients could get an additional $2,400 a year in benefits if a new bill recently introduced to Congress wins approval — something seniors would no doubt welcome as surging inflation wipes out their annual cost-of-living increases.

Discover: 4 Best Places in California for a Couple To Live Only on Social Security
Social Security Solvency: Lindsey Graham Thinks Seniors May ‘Have to’ Take Less Money — Can They Afford a Benefits Cut?

The Social Security Expansion Act was introduced on June 9 by U.S. Rep. Peter DeFazio (D-Ore.) and U.S. Sen. Bernie Sanders (I-Vt.), CBS News reported. Under terms of the bill, anyone who is a current Social Security recipient or who will turn 62 in 2023 would receive an extra $200 in each monthly check.

The bill is timely for a couple of reasons. First, it follows a Social Security Administration announcement earlier this month that Americans will stop receiving their full Social Security benefits in about 13 years without actions to bolster the program.

It also comes during a period of historically high inflation that has a particularly big impact on seniors living on fixed incomes, many of whom rely solely on Social Security payments. This year’s Social Security Cost-of-Living Adjustment (COLA) of 5.9% is based on inflation figures from 2021. But since then, inflation has pushed well above 8%, meaning Social Security recipients today are actually losing money.

The new bill aims to ease the financial strain by boosting each recipient’s monthly check. The average monthly Social Security check is about $1,658, meaning a $200 increase would represent a 12% boost.

“Many, many seniors rely on Social Security for the majority, if not all, of their income,” said Martha Shedden, president of the National Association of Registered Social Security Analysts. “$200 a month can make a significant difference for many people.”

Even if the bill in its current form doesn’t pass Congress, observers expect some kind of change to Social Security to ensure it serves the needs of recipients well into the future.

“I’m confident changes will be made,” Shedden said. “I don’t know if this is the bill that will pass, but there is more and more movement on it.”

This article originally appeared on GOBankingRates.com : Social Security: New Bill Could Give Seniors an Extra $2,400 a Year

they just reduced college debt loans by $10,000. These are individuals that don't deserve it - they are young and can get out there and work. Seniors are the one that are feeling the brunt of this inflation.

it's not going to happen folks. typical politician's lies before a election. but the politicans didn't hesitate to give themselves a raise last year.

While the broad strokes of Social Security have remained the same since they were first created, the details of the program change constantly. Benefit amounts, earning limits, cost-of-living...
BUSINESS・2 DAYS AGO
GOBankingRates

Social Security Schedule: When August 2022 Benefits Will Be Sent

Social Security checks are scheduled to go out in early August. Rising inflation has pushed the Social Security cost-of-living increase to 5.9% for 2022, the largest in nearly 40 years, and it's...
BUSINESS・3 DAYS AGO
GOBankingRates

What Is the Highest Income for Food Stamps in 2022?

Americans who apply for federal Supplementary Nutrition Assistance Program benefits are required to meet an extended set of eligibility criteria to qualify, and one of those has to do with income....
FOOD & DRINKS・2 DAYS AGO
MarketRealist

Seniors Could Be Getting a Grocery Stimulus Check

Social security checks increased by about 6 percent in 2022 in response to inflation, lifting the average monthly payment to about $1,660. But, as many retirees are still experiencing budget constraints, requests have been made for a special inflation relief payment for social security recipients. Are there grocery stimulus checks coming for seniors?
GROCERY & SUPERMAKET・13 DAYS AGO

Social Security's 2023 Raise Could Shock You

The biggest benefit increase in four decades could be coming.
BUSINESS・24 DAYS AGO
The Penny Hoarder

Do You Lose SSDI When You Become Eligible for Social Security?

If you receive Social Security Disability Insurance (SSDI), you’ve probably worried at some point about losing benefits. After all, the application process is notoriously long and cumbersome. If you’re nearing retirement age, those fears may become more pronounced. So what exactly happens to your SSDI when you reach retirement age?
PERSONAL FINANCE・17 DAYS AGO
DoYouRemember?

Retirement means a few things: the end of work, a new change of pace in life, and figuring out Social Security. Once all the deadlines are adhered to and paperwork filed, there’s still the matter of just how much will be collected. Residents of some states will actually lose part of their Social Security checks. Which ones, and why?
ECONOMY・26 DAYS AGO
Markets Insider

Speaker Nancy Pelosi reported that her husband sold all of his stock in chip-maker NVIDIA. The document states Paul Pelosi sold 25,000 shares worth up to $5 million — at a reported loss. The trade comes as Congress is set to pass a $54 billion bill to bolster US...
CONGRESS & COURTS・13 DAYS AGO

Social Security: No Matter Your Age, Do Not Claim Benefits Until You Reach This Milestone

There's a magic number to know that can help you maximize your Social Security income when you are ready to retire. And it's not the number you might think it is. See: 10 Reasons You Should Claim...
PERSONAL FINANCE・3 DAYS AGO
Markets Insider

The Fed's aggressive rate-hike cycle risks pushing the US economy into a recession, Senator Elizabeth Warren said Wednesday. Before the Fed's latest increase, she told CNBC the fast pace of tightening won't control some of the factors contributing to elevated inflation. The Federal Open Market Committee on Wednesday raised rates...
CONGRESS & COURTS・13 DAYS AGO
ABC News

Another major legislative win for Democrats came Thursday, when -- over Republican objections of "corporate welfare" -- a bipartisan group in the House passed a bill that funds the nation’s science and technology industries with billions to boost domestic production of crucial semiconductor chips and additional research and development.
CONGRESS & COURTS・12 DAYS AGO
Daily Mail

Republicans launch bill that would require fathers to pay child support to unborn babies: Senator says legislation would make it possible for mother to get back pay from as early as conception

New legislation launched by Republicans would require a father to pay child support throughout a pregnancy. Sen. Kevin Cramer, R-N.D., introduced the Unborn Child Support Act last week that would amend the Social Security Act to 'ensure that child support for unborn children is collected and distributed under the child support enforcement program.'
CONGRESS & COURTS・21 DAYS AGO

Social Security Changes That May Be Coming for 2023

For the last 10 years or so, Social Security has been a fairly static program, with few major changes. But when inflation makes big news, so too does Social Security. This is because so many aspects...
BUSINESS・1 DAY AGO
The Motley Fool

Don't want your Social Security check going into state coffers? Consider retiring in one of these states.
PERSONAL FINANCE・5 DAYS AGO
Newsweek

The candidate, Jerome Segal, said he decided to announce his run for the Democratic nomination after Biden's "embarrassing" Middle East trip earlier this month.
PRESIDENTIAL ELECTION・14 DAYS AGO
GOBankingRates

No, Social Security Recipients Should Not Expect a 4th Stimulus Check

With inflation in America at an all-time high, seniors and others on a fixed income have been some of the hardest hit by the rising costs of groceries, utilities and fuel. In these tough financial times, many have been holding on to hope that a recent proposal to Congress calling for a new wave of $1,400 stimulus checks specifically for those receiving Social Security payments might be pushed through to the President’s desk. However, it doesn’t appear there’s been any action by Congress to put forth legislation as of yet.
BUSINESS・20 DAYS AGO

Stimulus Check Update: Millions to Get $750 TABOR Refunds in Mail

The checks started going out in the mail this week, but there are some things residents must do to ensure they get it.
COLORADO STATE・7 DAYS AGO
GOBankingRates

Will We Ever Receive Stimulus Checks Again?

https://www.gobankingrates.com
Is this article helpful to you?