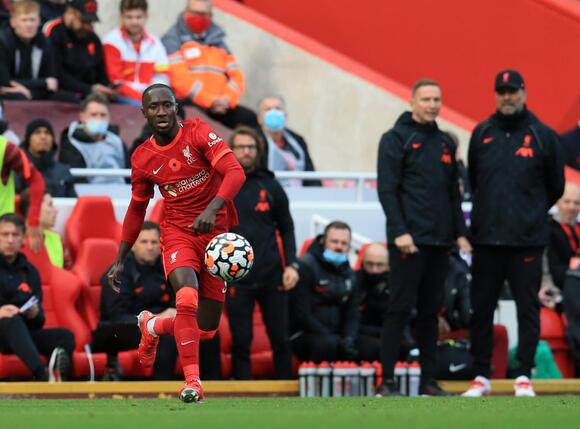 Former Leeds United player Noel Whelan has been speaking about the form of Liverpool midfielder Naby Keita since joining the Merseyside club in 2018.

Former Leeds United player Noel Whelan has been speaking about the form of Liverpool midfielder Naby Keita since joining the Merseyside club in 2018.

The 27-year-old is out of contract in 12 months' time and reports have suggested talks regarding extending that deal are in progress amid interest from Ligue 1 club PSG .

In an interview with Football Insider , Whelan said he had been expecting much more from the Guinea international who had set the world alight in the Bundesliga with RB Leipzig.

“We all expected a lot more from Keita.

“He’s been hit-and-miss. We’ve seen some spectacular performances, but also some average performances."

Whelan went on to say that it's consistency in Keita's game that is the key to him being a success at Liverpool and truly earning the respect of his manager Jurgen Klopp.

“He needs to work on his consistency and being a lot more involved in that midfield area. He’s got to command that area like Thiago does and like Wijnaldum did.

“Klopp obviously believes there is a player there and that he is capable of improving, or he wouldn’t be offering him a new contract.

“His aim in the next season has got to be to find that consistency in his game.”

The England international is out of contract this summer.
1 DAY AGO
LFCTransferRoom

Liverpool have recalled loanee centre-back Rhys Williams to the club after a disappointing loan spell at Blackpool, which could signal the end of Nat Phillips' stay at Anfield.
2 DAYS AGO
LFCTransferRoom

The West Ham United midfielder is being linked with a move away from the London Stadium this summer.
2 DAYS AGO
LFCTransferRoom

Liverpool to CASH IN on Mohammed Salah?

Liverpool could be set to cash in on their prolific Egyptian at the end of the season, with Jurgen Klopp looking to the future of a Liverpool rebuild.
2 DAYS AGO
LFCTransferRoom

Stefan Bajcetic Set to Be Included in Spain U21 Squad

Liverpool's defensive midfield starlet Stefan Bajcetic looks set to be included in the upcoming Spanish u21 squad with the Spanish Football Federation having 'big plans' for the 18-year-old.
2 DAYS AGO
LFCTransferRoom

Liverpool were reportedly interested in a move for the midfielder before he signed for Wolves in August.
1 DAY AGO
LFCTransferRoom

All the key details as two of Liverpool's rivals, Manchester City and Arsenal face off in the FA Cup fourth round on Friday.
5 HOURS AGO
LFCTransferRoom

Leaked images of the new design over recent weeks proved to be accurate.
15 HOURS AGO
LFCTransferRoom

Real Madrid host local rivals Atletico Madrid on Thursday for a Copa del Rey quarter-final tie and we can bring you the details of when and how to watch the epic clash. Liverpool will face Los Blancos in the last 16 of the UEFA Champions League with the first leg at Anfield on the 21st February ...
16 HOURS AGO