AUBURN — Auburn made a huge splash with its newest coaching hire.

Leroy Burrell, an Olympic gold medalist and former world record holder in the 100 meters, is the new track and field coach, the school announced Thursday.

Burrell was at Houston, his alma mater where he coached for the last 23 years. He replaces Ralph Spry, who retired after 25 years at Auburn.

He had set the  record in the 100 at the USA Championships in June 1991. Burrell finished in 9.9, a time that he improved later that year at the World Championships. His 9.88-second run in Tokyo, however, wasn't enough to win the race. Carl Lewis bested him with a new world record at 9.86.

Burrell and Lewis were on the 1992 Olympic relay team together. 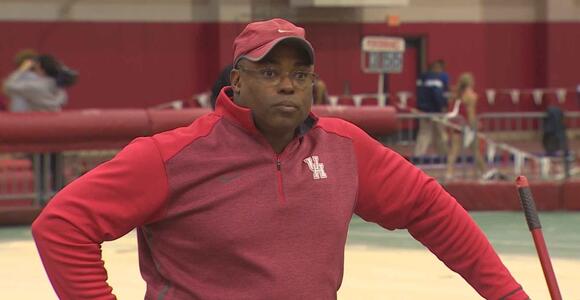 "Auburn track and field is getting a someone who knows how to build programs and does extremely well recruiting," Lewis said in a school release. "Leroy knows how to run a team, is extremely organized and can coach, especially the sprints. He works very well with people and whoever his staff is going to be, they’re going to enjoy working with him, because he’s that kind of guy. People at Auburn are going to love Leroy and his family.”

Burrell returned to the U.S. Olympic team in 1996 but was forced to withdraw by an Achilles injury.

LISTEN: Iron Bowl of Podcasts: How will 2021-22 be remembered for Alabama, Auburn athletics?

At Houston, he coached the team to 41 conference championships and more than 150 All-American honors.