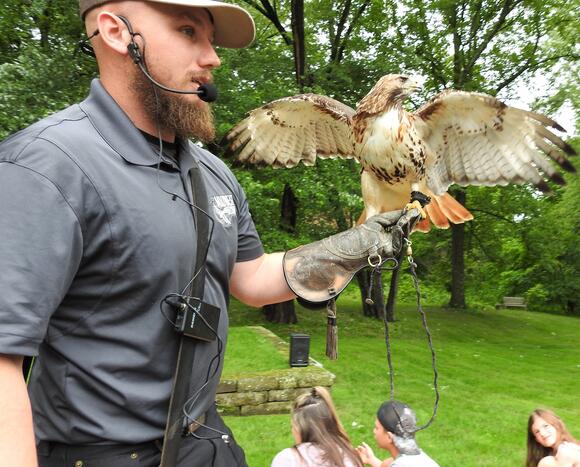 COSHOCTON — Teaching the importance of conservation to the next generation was the main focus of two programs by Midwest Falconry recently at Clary Gardens.

The organization, formerly known as Miami Valley Falconry, was last in Coshocton in 2019. Hawks, falcons and owls were showcased by Doug and Becky Geiger and Adam McGuire. Information on the species was given and questions were taken from the audience. Youth could prove what they learned from the presentation to win a button. 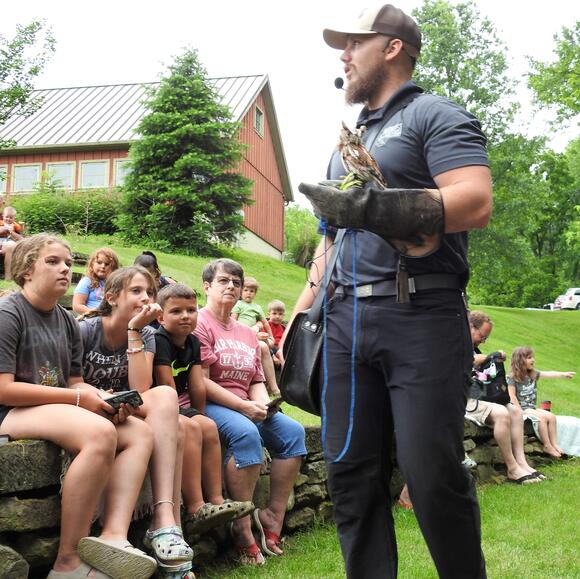 Falconry dates back more than 4,000 years and was often considered the sport of royalty. It's focused on training birds of prey to hunt wild animals in nature such as squirrels, rabbits and more. While those of Midwest Falconry train and use birds for hunting, their presentations are for other purposes.

Adam said when he and Doug started the program about six years ago outside Cincinnati, they worked with Xavier University. Now they do a lot of ornithology classes, team building exercises, schools, nursing homes and special events, such as renaissance festivals.

"I had a falconer come to my school when I was in fourth grade and I said 'one day I'm going to do that,'" Adam said. "We know we're not going to reach a whole crowd of a hundred kids, but it's the few you do reach that become the next conservationists for life." 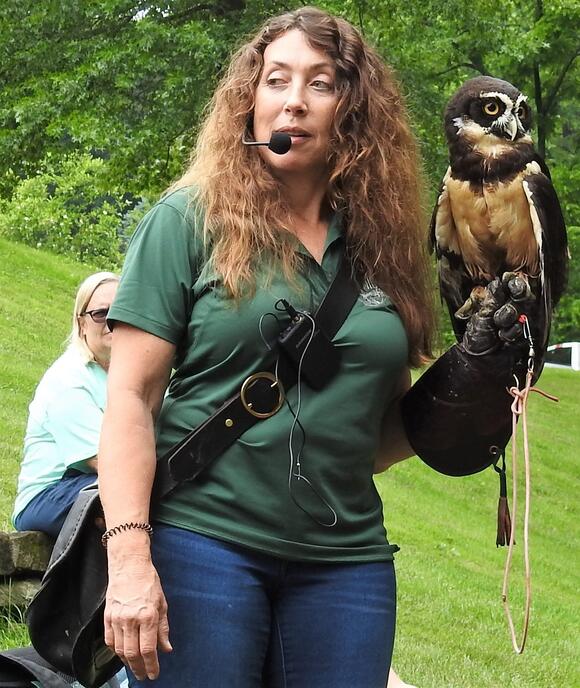 Becky said their primary focus is conservation, education and encouraging people to pursue falconry. That all starts with children and their programs have a lot of traditional values parents are still looking to introduce, she said.

"Education is where it's at and that's where I think we can affect the most change through the kids," Becky said. "It's so they can enjoy all the wildlife and species you and I grew up enjoying. It also teaches them to get out of the house and out into the nature, to stop living inside staring at a screen."

Jandi Adams, director of Clary Gardens, said bringing the birds of prey demonstration back made sense as the theme of their summer youth program is celebrating 25 years of Harry Potter and owls are a big part of the magic novels and films.

"You think about these big birds and how really fun it is to see them out in the wild flying overhead, but you never get to see them up close and personal," Jandi said. "You get a whole different perspective of what these birds look like." 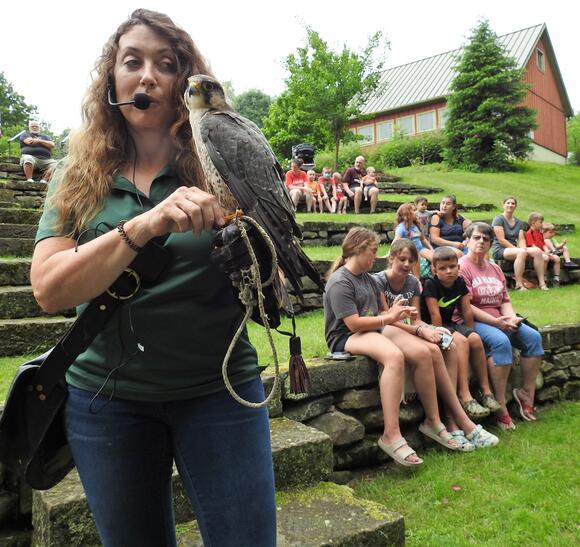 Adam said they not only love the natural outdoor amphitheater Clary Gardens has, but the positive nature of Coshocton residents.

"It seems they're very appreciative of our presence and bringing the birds. It makes it worth it," he said. "It's a very welcoming place to be."

Leonard Hayhurst is a community content coordinator and general news reporter for the Coshocton Tribune with close to 15 years of local journalism experience and multiple awards from the Ohio Associated Press. He can be reached at 740-295-3417 or llhayhur@coshoctontribune.com. Follow him on Twitter at @llhayhurst.