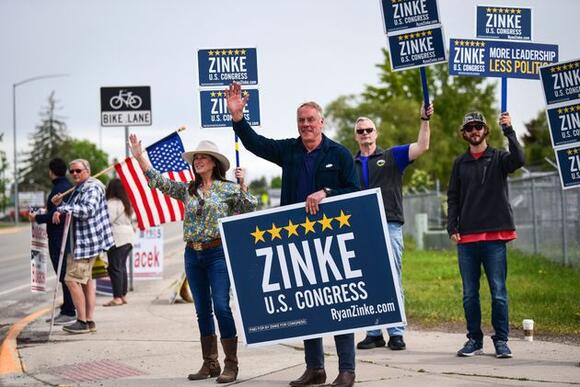 Former Interior Secretary Ryan Zinke, who is running as a Republican for a U.S. House seat, campaigns June 7 in Kalispell, Montana. He has again missed a deadline for filing a financial disclosure statement on his campaign. (Photo: Casey Kreider/The Daily Inter Lake via Associated Press)

A second round of financial disclosures were due to the clerk of the House of Representatives on May 16 — a few weeks before the June 7 primary election in Montana. Zinke missed the deadline without filing a request for an extension, according to documents on the clerk’s database.

As Montana’s former at-large House member, Zinke and his team should be well aware of financial disclosure rules — especially since he made headlines just last year for breaking a deadline. At that time, his campaign blamed its error on the House clerk’s office, saying it was given incorrect information that the first report was due in May 2022.

On Wednesday, Tranel sent a letter calling on the U.S. attorney’s office in Montana to investigate both Zinke’s failure to file the most recent report as well as income that he reported in his first disclosure last year.

“As an attorney my clients and I rely upon the fact that everyone is playing by the same set of laws, rules, and processes,” the letter states. “I urge you to please look into the actions of Mr. Zinke and hold him accountable for his failure to act.”

Zinke’s campaign did not respond to a request for comment Wednesday.

The House Committee on Ethics does not comment on individual candidates’ financial disclosures; however, its instruction guide on financial reporting clearly outlines that candidates’ first disclosure statements are due within 30 days of raising $5,000 and that a second must be submitted no later than May 16, 2022.

When Zinke did finally file his initial report in November, months after it was due, it revealed that he’d raked in more than $1.3 million for consulting and other services in the two years after stepping down as President Donald Trump’s interior secretary.

That income included $460,000 from oil giant ConocoPhillips, $135,000 from  mining exploration company U.S. Gold Corp. and at least $5,000 each from several other fossil fuel interests. He also listed $410,000 in earnings from a “JVL Enterprises” of Dallas, but HuffPost could find no active JVL Enterprises in Dallas. A review of Texas companies with “JVL” in their names would indicate Zinke likely consulted for JVL Advisors LLC, an oil and gas investment firm in Houston. The company’s founder and managing partner, John Lovoi, sits on the board of several other fossil fuel companies, including Roan Resources, Epsilon Energy, Helix Energy Solutions and Dril-Quip.

Zinke’s campaign did not previously respond to HuffPost’s request for clarification about which JVL he consulted for and the apparent error in its filing.

Tranel flagged the JVL discrepancy in her Wednesday letter, writing that it “raises serious questions about the truthfulness and veracity of his previous disclosure report that should be examined.” She also noted that the Ethics in Government Act of 1978 allows the U.S. attorney general to pursue civil action against “any individual who knowingly and willfully falsifies or who knowingly and willfully fails to file” a disclosure report, with a maximum penalty of $66,190.

“Fool Montanans once, shame on us. Try to fool us again, shame on scandal-plagued Ryan Zinke,” Tranel said in an email statement to HuffPost. “Zinke has lied to Montanans, lied to investigators, and lied under oath.”

“No one is above the law, and every voter should question Zinke’s motives and what he’s trying to hide from voters,” she added. 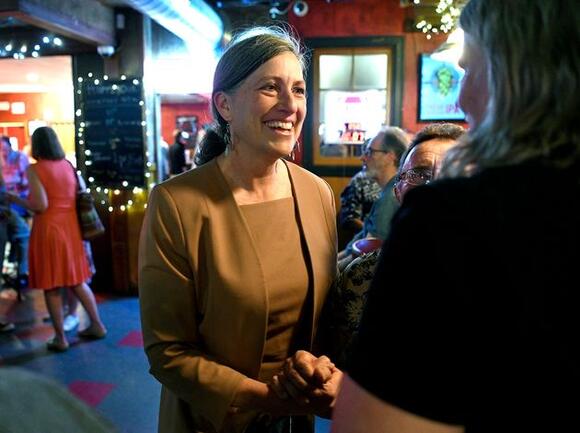 Democratic U.S. House nominee Monica Tranel talks with a supporter at a June 7 election watch event in Missoula, Montana. She says "every voter should question Zinke’s motives and what he’s trying to hide." (Photo: Tom Bauer/The Missoulian via Associated Press)

In her initial financial disclosure last year, Tranel reported stocks and funds worth between $2.5 million and $6.2 million and $75,000 in income between January 2020 and August 2021 from her work as an attorney. (The filings require broad ranges of financial disclosures rather than precise figures.) Her clients included several renewable energy companies. Her most recent filing , dated May 16, shows her income has remained steady — $50,000 in 2021 and $25,000 so far in 2022 — and minor changes to her total assets. Tranel’s campaign manager, Sam Sterling, acknowledged having mistakenly filed the second disclosure as an amendment to the first. At the clerk’s direction, the campaign subsequently refiled it on May 18 as a new, separate report. Both versions appear on the clerk’s disclosure database.

Zinke has largely avoided having to talk about his recent work for drilling and mining interests that he spent two years regulating as head of the massive Department of the Interior. But the timing of that industry work could become a major issue ahead of the November election, as much of it occurred while he was already running for office on a pledge to lower gas prices and restore the Trump administration’s fossil fuel “energy dominance” agenda. For approximately eight months after launching his campaign in April 2021, Zinke collected a large paycheck from ConocoPhillips.

Evan Barrett, a longtime Democratic policy and economic adviser in Montana who is now assisting with Tranel’s campaign, said of Zinke earlier this month : “If you’re running for Congress and asking people to be for you because you want to be their servant while you are getting paid as an adviser to a profiteering oil company, there’s some question about where your allegiance lies.”

Ahead of Montana’s primary, candidates on both sides of the aisle painted Zinke as a self-serving, corrupt politician. In one campaign ad , Tranel carried a snake in a shovel and said, “Growing up on a ranch in Montana, I learned how to deal with snakes. And we have a real poisonous one in Ryan Zinke.” The ad goes on to rehash the findings of a February report from the Interior Department’s internal watchdog, which concluded that Zinke violated ethics rules and misused his office with his continued involvement in a real estate project in his hometown of Whitefish, Montana, and that he lied to investigators about it.

Zinke has repeatedly dismissed ethics probes into his conduct as political attacks and falsely claimed that they ultimately cleared him of wrongdoing. And he and his team blamed his surprisingly unimpressive performance in last week’s Republican primary on Democrats’ “fraudulent election tactics” and the negative ads that opposing candidates ran against him.

Well, here we go again. Why expect different? No one is surprised by this or anything else he does.When you vote for corruption this is what you get.

Montana Republicans sure love their criminals

Sen. Ted Cruz Votes Against Changing Law That Made Him Center Of Attention On Jan. 6

Hundreds of newly revealed text messages proposing strategies to overturn the 2020 presidential election that were turned over to the House Jan. 6 committee by Donald Trump’s former White House chief of staff Mark Meadows are now clarifying his alleged role in the effort, according to The Guardian. Many...
PRESIDENTIAL ELECTION・2 DAYS AGO
HuffPost

Groups affiliated with the Democratic Party went on air against Republican candidates for secretary of state running on Trump's election fraud lies.
NEVADA STATE・1 DAY AGO

Climate Expert Says Attack By GOP Lawmaker Is Nothing New: ‘This Is The Playbook’

Florida Gov. Ron DeSantis, who recently made headlines for flying 48 migrants to Martha's Vineyard, was praised by Republicans for standing up against the Biden administration's immigration policies, but his political stunt has angered one of his closest allies – former President Donald Trump. Trump has privately accused DeSantis...
FLORIDA STATE・2 DAYS AGO
HuffPost

Cruz's tweet was in response to a clip of Senator Amy Klobuchar saying that Hurricane Ian is a reason why voters should back Democrats in the midterms.
FLORIDA STATE・2 DAYS AGO

Donald Trump reportedly made a racist assumption about a group of racially diverse congressional staff members at a White House reception held early in his presidency. According to an advance copy of New York Times reporter Maggie Haberman’s book, Confidence Man, which was obtained by Rolling Stone, Trump assumed the staffers were waiters ― and told them to get some food.
POTUS・1 DAY AGO
Salon

When former President Donald Trump went to court against the Justice Department to stall the federal investigation into classified documents at his Mar-a-Lago resort in Palm Beach, Florida, a district judge he appointed, Aileen Cannon, granted Trump everything he asked for, appointing a special master to review the documents for executive privilege even though no legal precedent grants a former president privilege over national security documents, and effectively blocking the DOJ from conducting a national security review until the special master's work is complete.
POTUS・1 DAY AGO
HuffPost

The Democratic California governor was asked about his relationship with Guilfoyle, who's now engaged to Donald Trump Jr.
CALIFORNIA STATE・9 HOURS AGO

“John Fetterman has the courage to do what's right,” the suburban Philadelphia sheriff says of the Democrat. “Dr. Oz doesn't know a thing about crime."
PENNSYLVANIA STATE・2 DAYS AGO
HuffPost

The Florida Republican pretty much summed up what the GOP has become, said critics.
FLORIDA STATE・2 DAYS AGO
NBC News

The former U.S. president who was more traitorous than Trump

It’s important to keep in mind that Trump is not — yet — the worst ex-president in U.S. history. Trump has made a serious effort to dishonor his post-presidency, of course. He likely has encouraged future insurrections by vowing to pardon the rioters who sacked the Capitol on Jan. 6, 2021. And he’s stashed boxes of top secret documents at his home at Mar-a-Lago, raising serious national security concerns.
POTUS・1 DAY AGO
HuffPost

The Library of Congress invited Lizzo to play the historic instrument, which survived the burning of Washington during the War of 1812.
U.S. POLITICS・1 DAY AGO

The Real Problem Revealed By The Brett Favre Welfare Scandal

Many Third-Generation Latinos Don't Speak Spanish. They're Tired Of Being Judged For It.

For children and grandchildren of immigrants, the message from some inside the community is clear: "You're not really Latino if you don't speak Spanish."
SOCIETY・3 HOURS AGO
HuffPost

Amid progressive calls to abolish the filibuster, the Arizona Democrat said she's in favor of restoring it to processes where it's already been removed.
CONGRESS & COURTS・2 DAYS AGO
HuffPost

Ginni Thomas To Testify Before Jan. 6 Committee 'Sometime This Week'