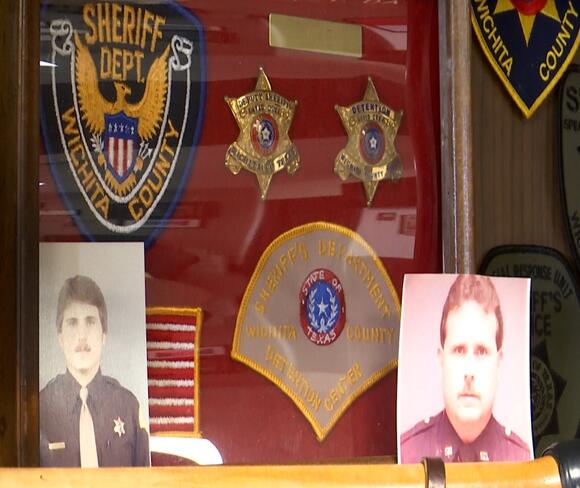 WICHITA FALLS ( KFDX/KJTL ) — This Friday, Wichita County Sheriff David Duke will celebrate his 40th year with the force, starting as a teenage jailer and rising to the top law officer of the county.

Imagine being shot at, almost being run over, or coming face to face with a cold-blooded killer you have to put in custody, any one of which is a frightening scenario, but for Wichita County Sheriff David Duke, those are just another day in the life of a sheriff.

“We worked everything from murders to drug labs to narcotics to fugitive apprehensions; you name it, we worked it,” Duke said. “So a lot of death, a lot of drugs, a lot of people that will never turn their lives around, you know a lot of humanity.”

After first applying to become a firefighter in 1982, Duke said he switched to a job in the jail when he was just 18 years old.

“I started in the jail, and I weighed about 130 pounds on a good day and grew a mustache just to look a little older around all these big inmates, these guys that are really hardcore kind of guys, but like my father always told me how to treat people right,” Duke said.

After surviving his first two years in the jail, Duke got a new title and duties in the field, at an age that came with some handicaps for a law officer.

“I was 20 and a half years old, I was the county’s youngest deputy sheriff and couldn’t buy my own bullets, so that was kind of an interesting gun story,” Duke said.

Over four decades, you can imagine Duke has seen several changes in law enforcement and the sheriff’s office.

“You got to change with the times, you got to continue moving forward, and so I always like to learn the newest things, the laws, you have to keep up with these things,” Duke said. “There’s a whole lot more involved than just being a law enforcer. I don’t care if you’re just a slick-sleeved police officer or deputy sheriff, there’s a lot of stuff you have to do before you start trying to arrest people.”

With those changing times came a major change that Duke played a big role in.

“This county jail should’ve happened 25 years ago hands down,” Duke said. “Our two jails we had, I said it more than once in Commissioners Court, and the media has picked up on it before that, I said the Titanic was in better shape than our county jails were.”

Duke said as he enters his fifth decade of service, his next big plan is to acquire body cameras for deputies as well as dash cams for all their vehicles.

Duke was elected sheriff in 2008, becoming the first Republican sheriff after the longest-running sheriff who served for 22 years, Tom Callahan, retired.

WICHITA COUNTY (KFDX/KJTL) — A jury has been seated for trial of a former Wichita County deputy, SWAT team member, and Wichita Falls police officer who is charged with invasive video recording. Gerald Morgan is alleged to have promoted a photo of the intimate area of a female by e-mailing the photo without the victim’s […]
WICHITA COUNTY, TX・3 DAYS AGO
Texoma's Homepage

Man sentenced to prison for assault of officer, burglary

WICHITA COUNTY (KFDX/KJTL) — A man who in the space of two months assaulted and resisted officers at a motel and broke into a liquor store and had a confrontation with the owner is sentenced to prison. Dillon Hollar pleaded guilty to assault of an officer and will serve eight years, according to records. He […]
WICHITA COUNTY, TX・2 DAYS AGO
Texoma's Homepage

WICHITA COUNTY (KFDX/KJTL) — A man who was originally charged with murder and then had the charge reduced to aggravated assault and deadly conduct pleads guilty to those charges Tuesday, September 27, 2022, for a suspended sentence. Alton Rhodes was sentenced to two seven-year prison terms, suspended to five years probation. The hearing was originally […]
WICHITA COUNTY, TX・2 DAYS AGO

Woman charged with biting officer, trying to take his weapon

A Wichita Falls woman faces several charges after police said she fought with them and bit and clamped down on an officer's cheek, then tried to take the officer's gun.
WICHITA FALLS, TX・2 DAYS AGO
Texoma's Homepage

DPS identifies man killed in officer-involved shooting on US 287

Authorities said the man who died following an exchange of gunfire with law enforcement officials on US 287 on Friday has been identified.
IRVING, TX・3 DAYS AGO
Texoma's Homepage

Stabbing sends one to hospital

WICHITA FALLS (KFDX/KJTL) — One person was sent to the hospital after a stabbing at a Wichita Falls apartment complex. Around 10:49 a.m. Monday morning, police responded to Highpoint Village Apartments to investigate a report of an assault with a weapon. On scene, Wichita Falls police found a victim, who was transported to United Regional […]
WICHITA FALLS, TX・3 DAYS AGO
Texoma's Homepage

According to the DEA, 2 milligrams of fentanyl is considered a potentially lethal dose. According to police, they had 2,000 times that amount.
WICHITA FALLS, TX・3 DAYS AGO

WICHITA COUNTY (KFDX/KJTL) — Wichita County deputies arrested a man for alleged human smuggling. According to the arrest report, on Friday, September 23, 2022, around 6:55 a.m., a Wichita County Deputy saw a white Buick SUV driving east on U.S 287 and F.M 1739 and conducted a traffic stop because the license plate was not […]
WICHITA COUNTY, TX・5 DAYS AGO
Texoma's Homepage

Hearing set to remove Sheriff Lyde from hospital board

CLAY COUNTY (KFDX/KJTL) — At Monday’s Clay County Commissioners meeting, a vote was taken to remove Sheriff Lyde from the Clay County Hospital Board. It passed by a 4-1 margin. That vote does not yet remove Lyde as chairman of the board, it sets motion a procedure to do that. That includes a hearing that […]
CLAY COUNTY, TX・2 DAYS AGO
Texoma's Homepage

1 dead in officer-involved shooting on US 287

The investigation is ongoing and traffic remains backed up for several miles along U.S. 287 in Wilbarger and Hardeman Counties.
HARDEMAN COUNTY, TX・6 DAYS AGO
Texoma's Homepage

Man to pay restitution for charges to elderly

WICHITA FALLS (KFDX/KJTL) — A man police say took credit cards of a 79-year-old woman he was working for and charged almost $10,000 is sentenced to probation and restitution. Angel Jimenez, 39, was given a 5-year sentence, suspended to probation, and ordered to pay $9,529 restitution by 89th District Judge Charles Barnard. Last December a […]
WICHITA FALLS, TX・6 DAYS AGO
Texoma's Homepage

WICHITA COUNTY (KFDX/KJTL) — The lack of rain and warm weather has forced Wichita County Commissioner to enact a burn ban. The order will take effect Saturday, Oct. 1, at 12:01 a.m. and will remain in force for 90 days, unless extended by the commissioner’s court. The burn ban order prohibits all outdoor burning but […]
WICHITA COUNTY, TX・3 DAYS AGO

He's part of what investigators called an Organized Crime group from the Galveston area and is currently jailed on over 24 warrants.
WICHITA FALLS, TX・7 DAYS AGO
Texoma's Homepage

A man police said was inside a woman's home carrying a golf club was sentenced for assault of an officer.
WICHITA FALLS, TX・6 DAYS AGO
Texoma's Homepage

WICHITA FALLS (KFDX/KJTL) — When you think of building a house or a shed, you probably think about using a hammer, nails, wood, metal, and other expensive items, and you probably wouldn’t think of mud and straw. Cob buildings or sheds have become more and more popular over the years, and provide several mental health […]
WICHITA FALLS, TX・3 DAYS AGO
Texoma's Homepage

Multiple agencies respond to a fire on Navajo Trail