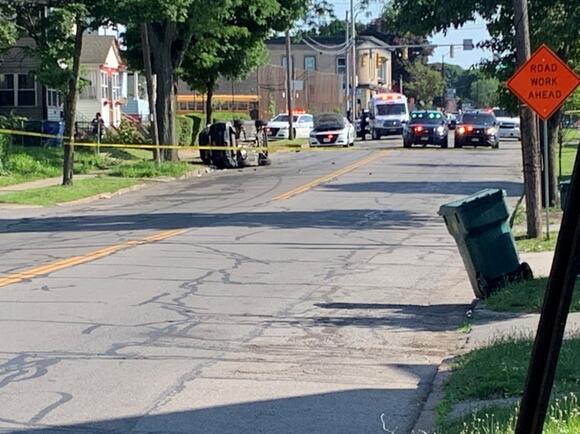 ROCHESTER, N.Y. (WROC) — A car that appears to be involved in a police chase crashed after flipping repeatedly in the area of North Goodman Street and Bay Street in a shocking video sent to News 8 Tuesday afternoon.

Officers from the Rochester Police Department said that state troopers attempted to stop the vehicle in the area of North Goodman Street and Central Park Avenue, but the vehicle failed to stop and a short pursuit was initiated by the New York State Police.

After the vehicle crashed, officers approach the car with guns drawn and a canine unit on ready, when two adult city residents climbed out of the shattered windshield.

A nearby resident, Chucky Naz, captured the footage on his front door home security camera.

“It looked like a movie, like a scene from a movie,” said Sean Irizarry who was just getting home from work at the time. This happened right in front of his home.

He thought this was a run-of-the-mill accident and rushed to help– until, “The police officers pulled up and they came out with their weapons drawn and so that made me want to— well, I just ran away after that,” he said.

Watch the video below:

Check back with News 8 as we continue to update this developing story.

Get up to speed on the latest headlines from in and around Rochester with today's Sunrise Smart Start.
ROCHESTER, NY・3 HOURS AGO
News 8 WROC

Man injured after shooting on Emerson St. in Rochester

The first officer at the location applied a tourniquet to control the bleeding before transporting the shooting victim to Strong Memorial Hospital.
ROCHESTER, NY・6 HOURS AGO
News 8 WROC

Officials said there were no injuries reported in either incident.
ROCHESTER, NY・18 HOURS AGO
News 8 WROC

RPD officers are currently trying to determine the cause of the woman's death. No further information has been released.
1 DAY AGO

Rochester police reported that Wolff suffers from PTSD and bipolar disorder, and is believed to be suicidal and in need of medical attention.
ROCHESTER, NY・12 HOURS AGO
News 8 WROC

ROCHESTER, N.Y. (WROC) — An 18-year-old man was hospitalized Friday after being shot in Rochester. Police said it happened around 8:30 p.m. on Jay Street. The victim was hospitalized with what investigators said were non-life-threatening injuries. A car driving down the street at the time of the shooting was also struck by gunfire. Two children […]
ROCHESTER, NY・2 DAYS AGO
News 8 WROC

Authorities say that Briggs was traveling westbound on Hydesville Road at an unsafe speed, and lost control of his car.
PALMYRA, NY・2 DAYS AGO

ROCHESTER, N.Y. (WROC) — Catch up on the last week in local news, in just a few minutes! Rochester Rundown, a digital exclusive brought to you by News 8 WROC, recaps some of the top stories from the past seven days. It’s everything you need to know, or might have missed. This week’s seven stories are: […]
ROCHESTER, NY・3 DAYS AGO
News 8 WROC

After the hunt was over, the bikers then returned to Swiftwater Brewing Co. to enjoy some drinks.
ROCHESTER, NY・12 HOURS AGO

In July 2022, Maddox was charged alongside 45-year-old Lorena Perea of Fairport for promoting prison contraband after the two had marijuana and tobacco in their possession.
GATES, NY・2 DAYS AGO
News 8 WROC

ROCHESTER, N.Y. (WROC) — Dr. Nicholas Nicosia, a prominent local dentist responded Friday to allegations that his house played host to a racist party that a Black Rochester firefighter was allegedly forced to attend. In his statement, Nicosia said he and his wife, Mary, “strongly disagree with how we are being characterized,” but also announced […]
ROCHESTER, NY・2 DAYS AGO
News 8 WROC

Rousseau is currently being held in the custody of the Sheriff without bail, due to previous felony convictions.
SENECA COUNTY, NY・1 DAY AGO
News 8 WROC

People like George Alexander and his granddaughter trickled into Parcel 5 and the Highland Bowl to send out positive vibes to show Rochester that they can't tolerate crime.
ROCHESTER, NY・1 DAY AGO
News 8 WROC

RPD officials said they are in need of applicants, having over 70 personnel openings.
5 HOURS AGO
News 8 WROC

August is Black Business Month, a time to recognize and celebrate the Black-owned businesses in our community.
ROCHESTER, NY・5 HOURS AGO