Pat Maroon on Stan Kroenke: ‘I can’t stand that guy’ 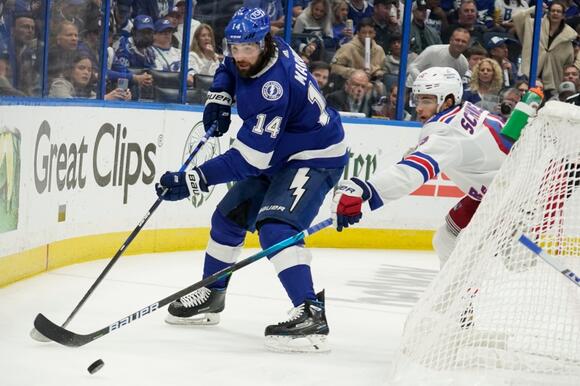 Maroon has won three straight Stanley Cups and 15 consecutive playoff series dating back to the St. Louis Blues’ championship run in 2019. The Lightning will take on an Avalanche team that led the Western Conference with 119 points this season.

The Avalanche franchise is also owned by Stan Kroenke, the face behind the NFL’s Rams move from St. Louis to Los Angeles in 2016. In an interview Tuesday on the Pat McAfee Show, Maroon showed his disapproval for the Avalanche’s owner, saying, “I hate Stan Kroenke.. I can’t stand that guy because he took the Rams from St. Louis.”

The 2022 Stanley Cup Final begins at 7 p.m. Wednesday. ABC will carry the broadcast for Game 1 and the rest of the final round.

Welcome to the 700 club, Albert Pujols! The St. Louis Cardinals legend has officially slugged his way to exclusive baseball territory in his sendoff season.
SAINT LOUIS, MO・3 DAYS AGO
FOX 2

‘Most dangerous woman in America’ is buried in Macoupin County, Illinois

Mary "Mother" Jones, a beloved union advocate and activist in the late 19th and early 20th centuries, is buried in a small cemetery along I-55 between St. Louis and Springfield, Illinois.
MOUNT OLIVE, IL・1 DAY AGO
FOX 2

Officers were at the scene of a shooting that took place near Ballpark Village early Saturday morning.
SAINT LOUIS, MO・1 DAY AGO
FOX 2

A fire at a well-known bakery in Waterloo does significant damage to a beloved business.
WATERLOO, IL・18 HOURS AGO

ST. LOUIS – A man allegedly shot and killed his roommate in south St. Louis Tuesday. A court document said Scipio Montel Clark, 47, got into an argument with Richard Brock and then shot him. Officers were called to the scene at a residence in the 3900 block of Chippewa Street. Brock was found on […]
SAINT LOUIS, MO・3 DAYS AGO
FOX 2

ST. CHARLES – Eastbound I-70 was closed for nearly an hour in St. Charles near Fifth Street after an accident involving a semi truck. The road reopened at around 1:40 pm. Check the latest traffic incidents here. FOX2Now.com/Traffic
SAINT CHARLES, MO・3 DAYS AGO
FOX 2

An investigation is underway after a suspected domestic situation ended with one woman dead and a home destroyed by a fire.
TROY, IL・3 DAYS AGO
FOX 2

The Major Case Squad of Greater St. Louis is investigating the fatal shooting of a St. Ann man.
SAINT ANN, MO・1 DAY AGO

ARNOLD, Mo. – A fire was reported Monday morning at Fox High School in Arnold, Missouri. The report came out at about 6:45 a.m. The fire was reportedly in an electrical socket. First responders were on the scene. FOX 2’s Bommarito Automotive Group SkyFOX helicopter flew over the scene.
ARNOLD, MO・17 HOURS AGO
FOX 2

ST. CLAIR COUNTY, Ill. – A fire guts a home in St. Clair County Monday morning, not far from O’Fallon, Illinois.  Crews got the call for the fire at a home on Simmons Lane near Bethel Road just after 7:00 a.m. When they arrived, the home was fully engulfed in flames.  Assistant Chief for the Hollywood […]
O'FALLON, IL・17 HOURS AGO
FOX 2

A dispute turned deadly Friday evening in Riverview when a woman died and a man was hurt in a shooting.
SAINT LOUIS, MO・2 DAYS AGO

An investigation is underway after a man was shot in the face Friday in north St. Louis.
SAINT LOUIS, MO・2 DAYS AGO
FOX 2

ST. LOUIS, Mo — He was born in Germany, but traveled all over as a professional soccer player, including playing in leagues on six different continents. But for Lutz Pfannenstiel home is now St. Louis.  He was hired more than two years ago as Sporting Director for St. Louis City SC. With the launch of […]
SAINT LOUIS, MO・1 DAY AGO
FOX 2

ST. PETERS, Mo. – One person was killed and two others were injured when a woman driving while intoxicated crashed in St. Peters. According to a court document, the crash happened on April 25, 2022 on Veterans Memorial Parkway just east of Spencer Loop South. Madeline Christian was driving a 2014 Jeep Compass in this […]
SAINT PETERS, MO・3 DAYS AGO
FOX 2

Man stabbed in back by girlfriend in south St. Louis

ST. LOUIS – A man was literally stabbed in the back by his girlfriend early Monday morning in south St. Louis. The 43-year-old man told police that he woke up at about 1 a.m. with a sharp pain from his back. Police said, “When he got up, he observed his girlfriend holding a knife confronting […]
SAINT LOUIS, MO・14 HOURS AGO
FOX 2

An investigation is underway after two women were shot and one was killed Saturday afternoon near the area of a St. Charles casino.
SAINT CHARLES, MO・2 DAYS AGO
FOX 2