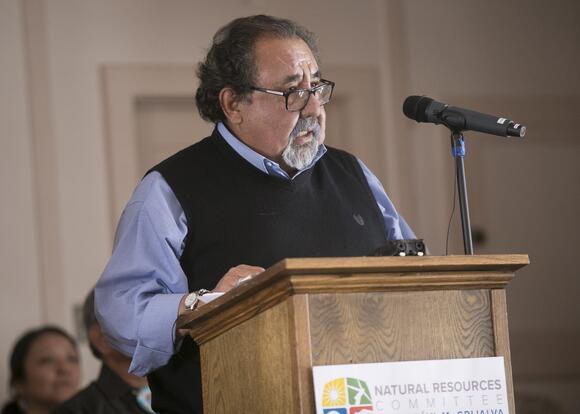 Rep. Raúl Grijalva was one of the 27 Democrats who voted against a bill that would augment security for Supreme Court justices.

The bill, which already has passed the Senate and President Joe Biden has indicated he would sign, passed the House Tuesday on a 396-27 vote.

The legislation would expand security to the justice's immediate relatives. A prior House version of the bill also included security for the staffers of Supreme Court justices, which Senate Republicans opposed.

Their exclusion from protection, Grijalva said, is why he voted against the bill.

"I am concerned at the speed which Republicans are willing to act to protect the Supreme Court, but not the lives of children from gun violence," Grijalva, D-Ariz., told The Arizona Republic in a written statement. "The Supreme Court justices would continue to have federal protection without this legislation. I voted against the Senate version of the bill because it did not go far enough to extend protections to Supreme Court justice employees and the rest of federal bench."

The House passed the legislation after a man was arrested June 8 near Supreme Court Justice Brett Kavanaugh's Maryland home . Nicholas John Roske of California had a Glock pistol, a tactical knife, pepper spray, zip ties, hammer and a crowbar, USA TODAY reported. According to police, he said he wanted to "kill" a justice and was angry about the leaked Supreme Court decision that would overturn Roe v. Wade. The 1973 landmark case resulted in women being able to legally seek an abortion nationally.

Tara Kavaler is a politics reporter at The Arizona Republic. She can be reached by email at tara.kavaler@arizonarepublic.com or on Twitter @kavalertara.

The Arizona Republic asked 3rd Congressional District Candidates Rep. Ruben Gallego, D-Ariz., and Republican Jeff Zink questions on policy issues such as water rights and the war in Ukraine, to district needs and what distinguished the candidate from their opponent(s). Below are Gallego's answers. Zink did not respond. The story will be updated with Zink's answers if he provides any. ...
ARIZONA STATE・2 DAYS AGO
AZCentral | The Arizona Republic

The Arizona Republic asked Rep. Greg Stanton, D-Ariz., and Republican challenger Kelly Cooper questions about policy issues such as water rights and the war in Ukraine and about specific constituent needs in Arizona's 4th Congressional District. Below are Stanton's responses, which were submitted in writing. Cooper did not respond, but...
ARIZONA STATE・2 DAYS AGO
The Independent

Donald Trump heads to Michigan, a state that spurned him in 2020 after he saw a surprise victory there four years earlier, on Saturday.He’s in the state for a rally in Warren where he hopes to bump the candidacy of Tudor Dixon, his chosen acolyte in the race to unseat incumbent Democratic Governor Gretchen Whitmer. The president is eager to have a supporter of his bogus conspiracies about his 2020 defeat in the governor’s mansion should he make another bid for the White House in 2024.Polls show Ms Dixon badly trailing the governor, who was the intended victim of...
MICHIGAN STATE・41 MINUTES AGO
AZCentral | The Arizona Republic

Arizona Attorney General Mark Brnovich is suing the Biden administration to try to stop its new student loan forgiveness program, arguing it doesn’t have the authority to take such an action. “This mass debt forgiveness program is fundamentally unfair, unconstitutional, and unwise,” Brnovich said in a statement. “The question...
ARIZONA STATE・2 DAYS AGO

A lot of folks are running the White House. Joe Biden just isn't one of them

Opinion: I've known several older folks who were sharper at 80 than I was at 40. Joe Biden is not one of them. This isn't about his age as much as his competence. Joe Biden isn’t as lively as he used to be. Not exactly breaking news, but it seems to be getting worse.
PRESIDENTIAL ELECTION・16 HOURS AGO
AZCentral | The Arizona Republic

Last month, Maricopa County Justice Courts released their eviction counts for July, shocking housing advocates across the state. The county recorded a whopping 6,405 eviction filings, more than at any point since 2008 and a 65% increase since April. This month’s disclosure is even worse: 6,574 eviction filings for August, or nearly 220 per...
ARIZONA STATE・1 DAY AGO
AZCentral | The Arizona Republic

Opinion: Arizona Republicans will set back the fight against abortion if they refuse to accept political reality and double down on stringent laws instead. Arizona Republicans are locked in a debate over how to regulate abortion. Gov. Doug Ducey argues for a 15-week ban he signed earlier this year. Attorney...
ARIZONA STATE・1 DAY AGO
AZCentral | The Arizona Republic

Former President Donald Trump will return to Arizona for an Oct. 9 rally in Mesa to support his endorsed Arizona candidates ahead of the Nov. 8 election. Trump is expected to speak in support of his endorsed candidates including Republican gubernatorial candidate Kari Lake, Republican nominee for U.S. Senate Blake Masters and “the entire Arizona Trump Ticket.”
ARIZONA STATE・1 DAY AGO