More than $1M in cocaine, meth, heroin found inside statues smuggled into Texas 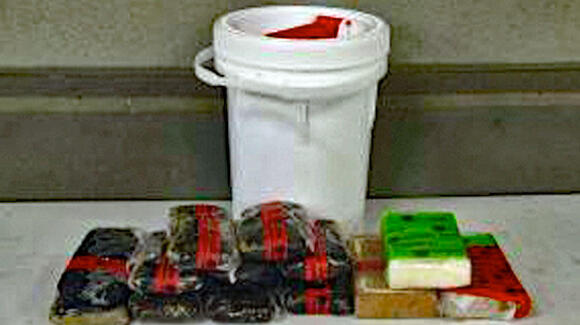 LAREDO, Texas (CBSDFW.COM) - U.S. Customs and Border Protection officers found $1,136,531 worth of cocaine, heroin and methamphetamine inside a shipment of statues at the Colombia-Solidarity Bridge.

The narcotics were seized on June 9 from an SUV whose driver declared the shipment from Mexico.

Officers referred the 2006 Nissan Pathfinder for a canine and non-intrusive imaging system inspection. That resulted in the discovery of 7.18 pounds of cocaine, 22.79 pounds of methamphetamine and 22.97 pounds of heroin.

Have you guys seen Queen of the South? Likely a self tipped off batch as a courtesy to the FBI from the Cartel leads. If they truly wanted/needed it to get across they would pay for it like most shipments that make it through. Sometimes I thinks these shows may not be too far from the truth.

and there is the reason for most of the shootings. these people that are shooting are on these drugs so they have mental issues. b thinks open borders are good arethey, why?

And the vehicle right behind him came across with 60 kilos.

AUSTIN, Texas — A commercial truck that carried dozens of migrants from near the U.S.-Mexico border to San Antonio had successfully cleared a Border Patrol highway inspection checkpoint, a senior federal law enforcement official with firsthand knowledge of the investigation told the Washington Examiner on Tuesday. Officials with the...
SAN ANTONIO, TX・1 DAY AGO
NBC News

Four men are in federal custody after dozens of dead migrants were discovered Monday in the trailer of an apparently abandoned big rig in San Antonio. Two additional arrests were announced Wednesday as the death toll rose to 53. Homero Zamorano Jr. 45, of Pasadena, Texas, was arrested Wednesday on...
SAN ANTONIO, TX・1 DAY AGO
CBS DFW

MISSION, Texas (CBSDFW.COM) — U.S. Customs officers arrested a 77-year-old man wanted for two counts of indecency with a child at the Texas-Mexico border. On June 26, Jesus Maria Velazquez Guerra was taken into custody at the Anzalduas International Bridge. He's a Mexican citizen and lawful permanent U.S. resident from Lasara, Texas. "CBP is committed to bringing those wanted individuals in to face their day in court, especially those wanted for heinous crimes such as sexual offenses against children," said Port Director Carlos Rodriguez, Port of Hidalgo/Pharr/Anzalduas.Velazquez Guerra had an active arrest warrant from Willacy County Sheriff's Office, and an outstanding warrant stemming from allegations from an incident earlier in June. A Mission police officer arrived to take custody of Velazquez Guerra and transported him to the county jail.Indecency with a child is a second-degree felony in the State of Texas.
MISSION, TX・1 DAY AGO
NewsRadio WFLA

Grandma arrested for smuggling cocaine and heroin into Florida prison

A woman has been arrested after being caught with 100 grams of cocaine and heroin while visiting an inmate at a Florida correctional institution.
DESOTO COUNTY, FL・1 DAY AGO

Arizona drug busts: Some of our most recent, biggest seizures

PHOENIX - The U.S. Drug Enforcement Administration warned law enforcement agencies from coast to coast about a concerning spike of "mass-overdose events" involving the deadly and highly-addictive drug fentanyl. The Arizona-Mexico border is no exception to the number of deadly drugs making their way over and killing many, and getting...
PHOENIX, AZ・1 DAY AGO
iheart.com

The video was taken by a Texas law enforcement official and shared with Fox reporter Bill Melugin. It’s a highway in Eagle Pass. That was last week Thursday. Over the weekend, Fox’s Griff Jenkins showed video of 300-plus illegals. Even MSNBC is admitted that what we are seeing...
EAGLE PASS, TX・1 DAY AGO
NBC Dallas-Fort Worth

Six police officers were killed and four others wounded Sunday in the northern Mexico border state of Nuevo Leon after they were ambushed by a presumed drug gang equipped with 10 homemade armored cars and heavy weaponry. Nuevo Leon state police said the patrol was outnumbered in the pre-dawn attack...
2 DAYS AGO
WFAA

FORT WORTH, Texas — The Tarrant County Sheriff's Office announced on Monday that a drug bust involving multiple agencies across North Texas led to the seizure of thousands of fentanyl pills. The sheriff's office said it worked with agencies such as the Drug Enforcement Administration, the Texas Department of...
TARRANT COUNTY, TX・2 DAYS AGO

Two drug traffickers in California who were arrested last week for being in possession of 150,000 fentanyl pills — enough to kill millions of people — were released back onto the streets, officials said. Jose Zendejas, 25, and Benito Madrigal, 19, both from Washington, were arrested during a...
TULARE, CA・2 DAYS AGO
Fox News

3 From Louisiana Arrested After Month-long Narcotics and Firearms Trafficking Investigation. Louisiana – Throughout the month of June 2022, the East Baton Rouge Sheriff’s Office reported that their Narcotics Division conducted an investigation into the narcotics and firearms trafficking group known as the Blue Print Kids (“BPK”). According to EBRSO, this group was led by Ethan Hendricks, Jacquel Bellard, Marcus Elam, Quinton Rogers, and several other co-conspirators. During the investigation, agents discovered that the group was transporting large amounts of marijuana from Oregon to East Baton Rouge and Ascension Parish.
LOUISIANA STATE・1 DAY AGO
Magic 95.1

EAST ST. LOUIS, Ill. (WJPF) – The ringleader of a drug trafficking operation, responsible for distributing over four million dollars worth of cocaine in southern Illinois and the surrounding area, has been sentenced to 30 years in prison. Ruben Caraway, 46, was arrested in Texas last year. Eight co-defendants...
LAW ENFORCEMENT・1 DAY AGO

ST. CLOUD, Minn. -- Three people have been arrested after a package of 5,600 fentanyl pills bound for a residence in St. Cloud was intercepted.According to the Central Minnesota Violent Offender Task Force, Minneapolis airport police intercepted the parcel, which was being shipped to the 1700 block of 7th Avenue South in St. Cloud.Officers executed a search warrant at the residence and arrested a 33-year-old for first-degree possession of a controlled substance. During the raid, officers also found a "large amount" of marijuana and arrested a 43-year-old for fifth-degree possession of a controlled substance.While at the residence, officers learned that a 31-year-old man had ordered the shipment. He also had a warrant out for his arrest in connection to a shooting on May 21.The man was arrested at a convenience store in St. Cloud on June 17. He is in Stearns County Jail for first-degree possession of a controlled substance, second-degree assault, and being a felon in possession of a firearm.
SAINT CLOUD, MN・1 DAY AGO
KTLA

The names, addresses, and license types of every Concealed Carry Weapons (CCW) permit holder in California were exposed as part of a data breach suffered by the state Department of Justice, according to the Fresno County Sheriff’s Office. Officials say the California State Sheriff’s Association informed the Fresno County Sheriff’s Office about the data breach, […]
FRESNO COUNTY, CA・1 DAY AGO
CBS DFW

More than $2M in narcotics seized at Juarez-Lincoln Bridge

LAREDO, Texas (CBSDFW.COM) — U.S. Customs and Border Protection officers seized more than $2 million in narcotics this past weekend. "The South Texas border is one of the most significant drug trafficking corridors along the U.S.-Mexico border," said Port Director Alberto Flores, Laredo Port of Entry. "CBP officers at the Laredo Port of Entry work diligently to help stop the smuggling of illicit narcotics on a daily basis, as this enforcement action clearly illustrates."The drugs were seized on June 19 at the Juarez-Lincoln Bridge after officers encountered a commercial bus arriving from Mexico. The 2006 Motor Coach Industries bus was referred for a canine and non-intrusive inspection system examination, resulting in the discovery of 80.02 pounds of methamphetamine and 18.29 pounds of heroin.Officers seized the narcotics and the bus. U.S. Immigration and Customs Enforcement-Homeland Security Investigations special agents are investigating the seizure.
LAREDO, TX・7 DAYS AGO
CBS DFW

DALLAS (CBSDFW.COM) - There is still more to learn about the temporary restraining order put on the state of Texas' abortion ban and what this means for abortion clinics here in North Texas. There are more legal questions as CBS 11 spoke with an SMU law professor who provides a better understanding of what's happening. Ellen K. Solender Endowed Chair in Women and the Law and Professor of Law, Joanna Grossman explains what this temporary restraining order granted by a Harris County judge means. "Right now providers, yes, individually they have to decide how much risk they're comfortable with which is sort of always...
TEXAS STATE・14 HOURS AGO
CBS DFW

(CBSDFW/AP) - Calls from women who are confused, afraid and sometimes struggling financially continue at area women's health clinics. This despite a ruling from a Texas judge on June 29 blocking officials enforcing a ban after the U.S. Supreme Court overturned the constitutional right to the procedure nationwide.The order allows clinics to resume services, for now, in a state where abortion was already severely restricted to only up to six weeks of pregnancy under a Texas law that took effect in September that the U.S. Supreme Court declined to block.Some of the women calling clinics are rape or domestic violence survivors. "We...
TEXAS STATE・22 HOURS AGO
CBS DFW

TEXAS (CBSDFW.COM) — Most Texans think abortion should be legal in Texas - Texas women, and younger Texans, especially so. But that statewide view in Texas is not quite as high as it is nationally.So what might happen next? Three-fourths of Texans think women will continue try to get abortions in Texas even if the procedure is illegal, and even if it may be unsafe for them to do so. A two-thirds majority believes more children will be neglected if most abortions are illegal. By comparison, only half believe more children will be adopted. Texans who say abortion should be mostly illegal do hold...
TEXAS STATE・15 HOURS AGO
SCDNReports

TARRANT COUNTY (CBSDFW.COM) - He's a hero to thousands of North Texas homeowners by helping fight property tax appraisals for free. But a North Texas realtor says it's also the reason why he's a bad guy in the eyes of the Tarrant Appraisal District which he believes is trying to discredit him. Chandler Crouch estimates he's helped 28,000 homeowners get their property values lowered this year.He's coming here tomorrow for a meeting with the appraisal review board because of 4 complaints filed against him for supposedly giving false information. But those complaints were filed by an appraiser leading a lot of residents to...
TARRANT COUNTY, TX・9 HOURS AGO