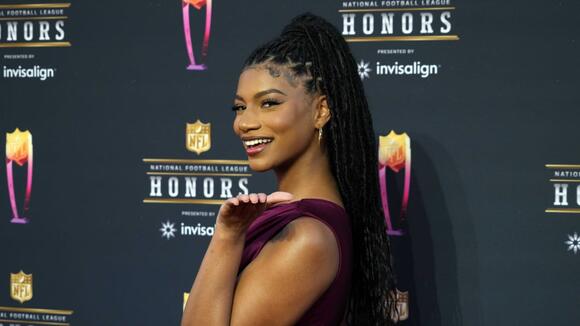 The rising media star from Bleacher Report is on Amazon’s radar after she expressed interest in doing more NFL coverage.

Amazon is targeting Bleacher Report ‘s Taylor Rooks for its primetime Thursday Night Football coverage this fall, according to a report from Front Office Sports.

Amazon is interested in adding Rooks after she expressed an interest in doing more NFL coverage. Rooks has been primarily covering the NBA for Bleacher Report and Turner Sports.

“Just being from Georgia, in the South, I grew up loving football,” Rooks told Barrett Sports Media.

“My dad played football. It was a football house. I love basketball—I love them both, but I just love football a little bit more. I’ve gotten kind of sucked into doing mainly NBA, which is great and has led to so many amazing experiences, but I just wish I had more of a hand in football. I would love to be able to do more of that,” she continued.

If Rooks joins Amazon, there’s potential for her to contribute feature stories to the NFL coverage.

There’s also potential for Rooks to continue her job covering the NBA at Bleacher Report , as the media relationship is non-exclusive between her current employer and Amazon.

Kirk Herbstreit already has an arrangement with Amazon and ESPN, where he can call Thursday Night Football games with Amazon and continue his college football coverage with “The Worldwide Leader in Sports.”

Amazon’s exclusive coverage of Thursday Night Football begins on September 15, when the Chargers travel to Arrowhead Stadium to take on the Chiefs.

The Hall of Fame coach described what he saw on the Bucs sideline when Cameron Brate suffered a concussion Sunday.
TAMPA, FL・20 HOURS AGO
Sports Illustrated

The quarterback’s wife was not pleased to see the opinion published by a reader of the Kansas City Star.
KANSAS CITY, MO・2 DAYS AGO
Sports Illustrated

The Carolina quarterback had a bold reply to the response the offense received during Sunday’s home loss to Arizona.
CHARLOTTE, NC・1 DAY AGO

The NBC show had some fun with Eli and Peyton Manning on its latest episode.
NFL・1 DAY AGO
Sports Illustrated

The Alabama coach appeared to criticize Jenny Dell of CBS for not asking about the team, although she did exactly that.
TUSCALOOSA, AL・1 DAY AGO
Sports Illustrated

The veteran linebacker logged one of the most unique hits of his career on Monday Night Football.
NFL・11 HOURS AGO

The Patriots coach gave his thoughts on the situation involving the Dolphins quarterback after his own signal-caller left Sunday’s game with a head injury.
NFL・20 HOURS AGO
Sports Illustrated

It was the first time in seven years that a non-NBA team beat an NBA squad in the United States.
PHOENIX, AZ・1 DAY AGO

Reports: OBJ Was at Giants Facility to Visit Shepard

France’s Victor Wembanyama shared his thoughts on Scoot Henderson ahead of their anticipated meeting on Tuesday.
NBA・12 HOURS AGO
Sports Illustrated

Report: Broncos’ Javonte Williams Out for Season With Knee Injury

The Denver running back was carted off the field Sunday against the Raiders.
DENVER, CO・19 HOURS AGO

The graduate transfer was carted off the field Saturday after sustaining an injury on the opening kickoff against Auburn.
BATON ROUGE, LA・16 HOURS AGO
Sports Illustrated

Under the expanded postseason, we could be treated to matchups like Ole Miss vs. Michigan in Ann Arbor.
NFL・21 HOURS AGO
Sports Illustrated

MAQB: The Impact of Tua’s Concussion Is Already Clear

The NFL was forced into action after the Dolphins quarterback’s injuries, and it showed through the rest of Week 4. Plus Zach Wilson’s improvement, J.J. Watt’s scary week and more.
NFL・14 HOURS AGO
Sports Illustrated

Philadelphia is the last remaining unbeaten team, a good enough distinction for this week’s top spot. After that is something resembling parity.
PHILADELPHIA, PA・1 HOUR AGO