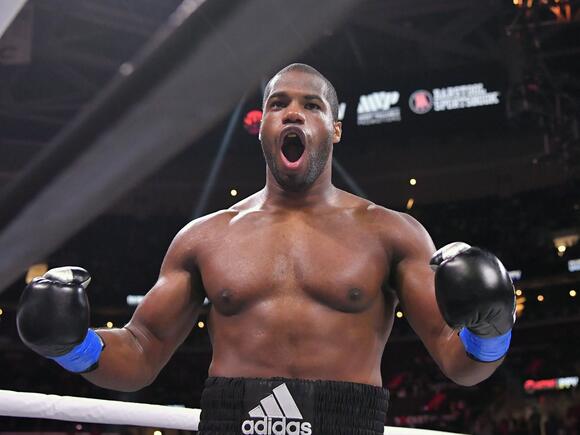 It took Daniel Dubois less than 10 seconds to solve the puzzle of Trevor Bryan in a jai alai arena, at Casino Miami on Saturday night.

In a tiny ring, in a distant city and in front of about 600 people, Dubois finally knocked out Bryan in the fourth round with a sweet left hook. Bryan went down heavily, landed face first, tried to move but the count was waved off when it was clear he had no chance of getting up. He did get up at about 12 seconds and asked to continue.

The carnival at the faded casino was promoted by Don King, who manages Bryan, under a banner of freedom and peace; three anthems played in a ring heaving with over 50 people, which included a dozen ceremonially dressed policeman with rifles, before the first bell. King had added the Ukraine anthem.

Bryan had entered the ring unbeaten in 22 fights, untested, confident and the holder of the WBA’s “regular” heavyweight title – the WBA currently have nine weights with a super and a regular champion. It is boxing’s curse, but often the men holding the regular belt get a shot at the man holding the super belt. Fights for the regular title are essentially eliminators for a fight against the real champion. It’s mayhem, but it often works: it does not work in the heavyweight division where the WBA champion is Oleksandr Usyk, who is due to fight Anthony Joshua in August. Usyk was not going to fight Bryan and he is not going to fight Dubois anytime soon.

Bryan was not a danger or a hazard in the comically sized Miami ring; his unbeaten credentials were exposed early and the final, chilling finish was inevitable from the moment the first bell echoed off the thousands of empty seats. He seemed to know his fate and accepted it with a bit of style. Bryan froze at the first sign of nastiness from Dubois and had nowhere to hide in the shrunken ring, but he stuck to his lost cause. He is a nice fella and I actually felt sorry for him. Bryan had no idea how to not get knocked out.

Dubois jabbed, moved, waited, got a few rounds and then let the punch go. “I knew straight away that he was not getting up,” said Dubois. So did everybody else.

A tearful Bryan promised to return, asked for a rematch and then, bizarrely, comforted Dubois when Dubois apologised for the knockout. “Nah, forget it – it’s what we do,” Bryan told Dubois in the dressing room. It was a lovely moment at the end of a chaotic week; it was also a flawless finish from Dubois and, in the rush to condemn Bryan’s ability and the unintentional humour of King’s promotion, it should be remembered.

The floor of the jai alai pit was packed with white tables and neat chairs and resembled a wedding reception; the first floor of the seating was closed because it looked like the ceiling had collapsed under the latest storm and two janitors worked full-time to mop away at a flood on one side of ringside. King, now 90, was there with his flags and his smile, nodding approval as the fights ended and receiving people at his table; an elder statesman conferring his blessing on those bewitched by his reputation. He praised Dubois and had sympathy for Bryan at the end. “I’m not done yet,” he warned me. I believe him.

Dubois celebrated with a take-away chicken feast in his bedroom at an airport hotel at the end of the odd night; Dubois briefly held the WBA belt in his hands before having to give it back to Bryan. A new belt for Dubois is in the post and that belt is currency, especially in a division with such a dominant set of champions and leading contenders. The WBA does have rules and regulations – all can be ignored, broken or altered – which insist the super champion has to fight the regular champion. Dubois will not grow old waiting, trust me.

There is a shopping list of heavyweights for Dubois and some of the men mentioned will fancy the job if the price is right. Dubois and Shane McGuigan, his trainer, mentioned Dereck Chisora, Dillian Whyte and Joseph Parker. They would all be considerable risks and exceptional fights for Dubois. His new WBA belt is not just a piece of costume jewellery, it is not a vanity trophy traded between fighters for fun. Bryan never had a lot of fun on Saturday night in Miami, that is for sure.

Now, Dubois and his people must turn the belt into something more significant than a footnote to a wild night in Miami when King lost a fighter. Dubois is still only 24 and time is on his side in a division where being 30 is still considered young.

There have been a number of sad reports coming out of the world of professional wrestling in recent weeks, with former stars passing away, both during their career and following it.
2 DAYS AGO
OnlyHomers

World Wrestling Entertainment (WWE) star Hulk Hogan is "paralyzed" from the waist down, at least according to another legendary wrestler, it has been revealed. Kurt Angle, speaking on an episode of his top-rated podcast on Sunday, said that he and Hogan, 69, spoke backstage when they both appeared at the 30th Anniversary special for WWE’s program “Monday Night Raw.”
2 DAYS AGO
OnlyHomers

The world of college basketball is mourning the loss of one of its own this week after it was reported that a member of the 1989 national title-winning Michigan Wolverines basketball team has died at the age of 53.
ANN ARBOR, MI・1 DAY AGO
The Independent

The Los Angeles City Hall was lit up in purple and gold on Tuesday night in honour of LeBron James.He has become the NBA’s all-time leading scorer, passing Kareem Abdul-Jabbar’s long-standing record.James scored 38 points in a 133-130 defeat by the Oklahoma City Thunder to surpass the previous record of 38,387, set in 1989.He now has 38,390 across a stunning 20-season career, which has seen him win four NBA Championships.In honour of James, the LA City Hall was seen lit up in purple and gold.Click here to sign up for our newsletters. Read More Lebron James hugs daughter after breaking NBA scoring recordLebron James hugs daughter after breaking NBA scoring recordWrexham manager proud of ‘team’s achievement’ despite FA Cup loss to Sheffield United
LOS ANGELES, CA・2 HOURS AGO