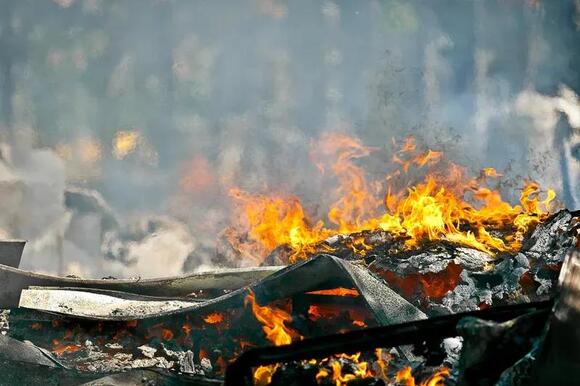 WARREN (WWJ) – A Warren man who was injured after a bomb exploded inside his home last weekend was allegedly on a federal watch list.

Warren police and fire crews, as well as the Michigan State Police Bomb Squad, were called to the home on Gentner near Schoenherr shortly after 3 p.m. Saturday, June 11.

Investigators found what Warren Police Commissioner Bill Dwyer calls an "arsenal" of weapons inside the home, including small explosive devices and thousands of rounds of ammo.

The explosion happened in the garage and spread to the rest of the house, police said.

Police executed a search warrant at the home after the 38-year-old man was taken to a hospital after sustaining severe injuries. He lost both his arms in the explosion, according to the report.

The man was in critical condition Sunday afternoon and Dwyer said he likely will not survive.

The man had an extensive criminal background involving weapons charges and explosive items. He also potentially had ties to domestic terrorism, police said.

Dwyer said he could not comment on the nature of the of the previous investigation, but said federal authorities were involved.

The man's name has not yet been released.

During their search, Warren police found a dozen guns, including handguns and rifles, as well as loaded AR-style magazines, according to a Detroit News report. Police seized around 4,000 rounds of ammo.

Authorities also found small explosive devices at the home and investigators believe the man was running some sort of illegal operation, though many details still remain unclear.

If he's been arrested before and/or has an extensive criminal background, why in God's name was he allowed a) out of prison at all and b) allowed to own guns? You KNOW he didn't fill out an honest background check as required by law and if he did, he lied on it. He is a KNOWN criminal and can access guns. Tell me again why we need gun control - it won't solve criminals acquiring guns, just legal, law-abiding citizens (but then again, they are the ones that are the most danger to the current government and they are afraid - exactly what the 2nd Amendment was intended to do! The right to bear arms was not and is not for "hunting" purposes alone! They are to help keep government in check!

The Warren Police Department is investigating an armed robbery at a pharmacy this weekend on the city’s east side. No one was injured, but the suspects got away.
WARREN, MI・10 HOURS AGO
WWJ News Radio

Police are looking for three suspects, male and two females, who are believed to be involved in a carjacking that took place in the early hours of July 27.
DETROIT, MI・9 HOURS AGO
WWJ News Radio

Michigan State Police are investigating the stabbing death of a man on Belle Isle, after the alleged killer turned himself in Friday night.
HAMTRAMCK, MI・1 DAY AGO

Detroit Police said her body was discovered in the black of a 2017 Dodge Journey on Stahelin Street (19300 block) near Vassar just before 8:30 a.m. Friday.
DETROIT, MI・1 DAY AGO
WWJ News Radio

Police say a 14-year-old boy out on bond after allegedly shooting his girlfriend was driving a stolen pickup truck involved in a wild chase through Wayne County. An adult in the vehicle allegedly fired on officers.
DETROIT, MI・2 DAYS AGO
WWJ News Radio

A suspect is in custody and police are searching for two more after a police chase on Detroit’s northwest side led to a suspect opening fire on officers.
DETROIT, MI・3 DAYS AGO
WWJ News Radio

1 in custody after armed carjacking suspects fire shots at Detroit officers during chase; MSP searching for other suspects

A suspect is in custody and police are searching for two more after a police chase on Detroit’s northwest side led to a suspect opening fire on officers.
DETROIT, MI・3 DAYS AGO

Police said the victim was at the Project Greenlight business on Gratiot near Harper on Thursday around 2 a.m. when three men robbed her at gunpoint.
DETROIT, MI・2 DAYS AGO
WWJ News Radio

The family of a young man shot and killed while delivering for DoorDash in Detroit last month is still pleading for answers. Crime Stoppers is offering a cash reward of up to $2,500.
DETROIT, MI・3 DAYS AGO
WWJ News Radio

Michigan State Police are asking for help from the public to solve the case of a stolen boat and trailer in Ingham County. The suspect vehicle was caught on camera.
STOCKBRIDGE, MI・2 DAYS AGO
WWJ News Radio

A member of a white supremacist group will serve probation after he pleaded no contest to crimes including assessing whether vacant state properties in Michigan could be used for paramilitary training.
MICHIGAN STATE・2 DAYS AGO

One man is in critical condition after police say he was struck by a vehicle while running across a major freeway in Detroit Wednesday evening.
DETROIT, MI・3 DAYS AGO
WWJ News Radio

The search is on for a person of interest in an aggravated assault downtown Detroit late last month. Detroit police officials say officers were called to the area of 1st and Bagley Streets shortly before 8 a.m. on Saturday, July 30.
DETROIT, MI・4 DAYS AGO
WWJ News Radio

Detroit police are asking for help from the community after a man robbed a Dollar General store in the 1700 block of E. State Fair on the city’s east side last week.
DETROIT, MI・4 DAYS AGO
WWJ News Radio

$22,500 reward for tip that solves murder of Wixom man, found shot in his truck in Detroit

Jeff Najor of Wixom was killed at around 7 p.m. on Monday, July 18, 2022 on the city’s northwest side. Now there’s a hefty cash reward on the table to the person who can help police find his killer.
DETROIT, MI・4 DAYS AGO
WWJ News Radio

Police looking for woman who cashed stolen check worth $3,250, tried to buy gift cards after stealing purses in Macomb County

Police are searching for a woman who is accused of stealing purses from cars in Macomb County and successfully cashed a stolen check worth over $3,000.
MACOMB COUNTY, MI・2 DAYS AGO
WWJ News Radio

A Grosse Pointe man is facing charges for allegedly trying to kidnap his ex-wife in Van Buren Township, then leading police on a chase that ended with him crashing into a pole.
5 DAYS AGO
WWJ News Radio

Police are asking for help in locating a mentally disabled man who went missing after he left a local hospital in Detroit over a week ago. Detroit police say 62-year-old Warren Pride disappeared after he was last seen around noon on August 1
DETROIT, MI・5 DAYS AGO