PATERSON — Everyone who came into contact with Joe Clark, the no-nonsense, unconventional and legendary Eastside High School principal, had a strong opinion of him, good and bad.

Clark, who died in December 2020, was notorious for carrying a baseball bat and bullhorn as he roamed the halls of the high school. His story was turned into the 1989 movie "Lean on Me."

On Saturday those who loved, admired and a few who had leaned on him, gathered at the Paterson Museum to celebrate the pending release of the new book about Clark: "Ghost Stories: The Legend of Principal Joe Clark."

"If you asked 20 people to describe him in one word, you might get 20 different answers," said Chanie Peterson, retired teacher and administrator of Paterson Public Schools. Peterson worked as an English teacher at the Park Avenue school when Clark was principal. "Some would be positive, some negative. All of them might be right," Peterson said.

The book draws heavily on the accounts of the members of Eastside High School's Class of 1987. Alumni and former staff and faculty shared stories that are included in the coffee-table book.

The book is expected to be released in July. It was assembled and edited by Monique Davis and Leila Renee Grubbs, both Eastside Class of 1987 alumni. Staff and students and a few Paterson residents were also asked to provide anecdotes of Clark for the book.

Proceeds from the book will go to a nonprofit group that promotes research and awareness about an obscure neurological disorder known as Chiari malformation, which is a condition where a portion of the brain bulges through a normal opening in the skull where it joins the spinal canal.

Grubbs suffered from the disorder.

"I never said thank you to the doctors and medical staff who helped me," Grubbs said.

A fan of Clark, Grubbs said he helped her throughout high school and was a big part of her being the first in her family to graduate from college.

She told the story of how he helped her when she was a student at Delaware State College (now a university) just as classes were about to start.

"I am walking around with my classmates, and they ask 'Leila where are you getting your books'?" she recalled. 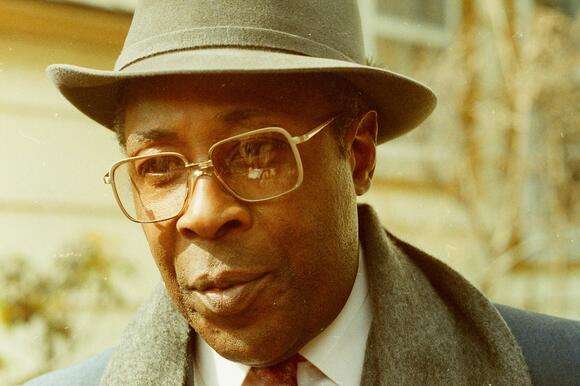 "I thought they would hand them out," she said. "I didn't have money so I called my mother. She said 'Call Mr. Clark'."

Clark sent her the money for her books.

"Most principals just wave goodbye when you leave," Grubbs said.

Michelle Mitto, also from the Class of 1987, said Clark was a lifesaver. She was homeless throughout high school, and Clark helped her and others by organizing student groups by ethnicity and their families who provided safe places for them to sleep. "He got me a job coach and helped me get my first job at Roy Rogers in Garden State Plaza," she said as tears began welling up.

"He was the one person who cared about what I was going to be," Mitto said.

She flew in from Florida to be part of this book release party and pay tribute to Clark.

Davis, too, had her Clark stories. Tales about his constant wielding of a bullhorn and demands to sing the school alma mater on demand were true, she said, but the bit about the baseball bat not so much.

He knew that she was a loner and encouraged her to make friends. He tried to get her to join the track team, which didn't work out well, but he did get her involved in the drama club, where she made lifelong friends. "We were fortunate to have him," Davis said. "He kept kids safe."

Peterson added that his reputation as a "my way or highway" administrator was a bit overblown.

"He'd listen to what you have to say," she said.

She'd often win the occasional battles of wills by being prepared and have the data to back it up.

"He empowered us" she said.

Matt Fagan is a local reporter for NorthJersey.com. For unlimited access to the most important news from your local community, please subscribe or activate your digital account today.