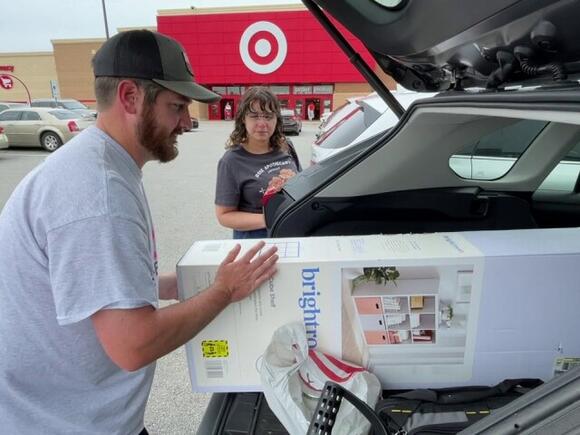 “I heard about it on TikTok,” said the self-professed shopaholic from St. Bernard. “I was seeing what other people were getting.”

She and her husband, Steve Zix, emerged from the Oakley Target store Friday with a new shelving unit for her Deer Park classroom.

As WCPO previously reported , Target is slashing prices to get rid of the patio furniture, kitchen appliances, Smart TVs and athletic/leisure fashions that America craved when confined to their homes. This is a startling reversal from the inventory crisis of 2021, when retailers couldn't restock fast enough to meet consumer demand.

But Target isn’t the only retailer facing a pandemic overhang. Amazon, Walmart and Home Depot all had inventory growth in the last year at least five times greater than its sales growth in the same period, according to the online publication, Freight Waves .

Among clothing retailers, The Gap, Abercrombie & Fitch and American Eagle Outfitters have all disclosed inventory gluts in recent weeks.

“What caught the retailers was how quickly (consumer) behavior shifted,” said James Lewis, a portfolio manager and senior research analyst for Bartlett Wealth Management. “The economy opened up and people were no longer confined to their homes. People started going out more to movie theaters and entertainment venues.”

Lewis said consumers will find bargains for months on home furnishings and casual clothing. But steady demand for consumer staples should keep Cincinnati's biggest companies from suffering from inventory bloat.

Kroger still faces "supply constraints" on grocery items, but most of the current inventory shortages are in general merchandise, which Kroger doesn't rely on as heavily as Walmart.

"It will impact them, but the hit will be manageable," Lewis said of Kroger.

At least until the next major consumer spending shift, which could be driven by rising inflation.

For a consumer-driven economy, this could spell trouble.

“Whether we technically get to a recession or not, we don’t know,” Russell said. “But we do think it’s going to unfortunately be heading in that direction.”

Whether it’s $6 gas or a slowing economy, Steve and Rachel Zix will be ready.

“We’re definitely trying to save more,” Steve said, “just focused on building up a safety fund if you will.”

He works for a toy distributor. She’s a teacher for Deer Park City Schools.

“I’m being more conscious about what I’m buying,” Rachel said. “Am I buying this because I need it or because it looks nice?”

A U.S. Senate hearing on the Kroger-Albertsons deal will have a local flavor. Kroger CEO Rodney McMullen will testify. So will the buyer of NKY's Remke chain.
CINCINNATI, OH・4 DAYS AGO
Business Insider

United Furniture Industries owner reportedly has vanished and is staying silent after laying off 2,700 staffers right before Thanksgiving

David Belford has been unreachable since axing nearly the entire staff. A source told the New York Post he may have fled the country.
MISSISSIPPI STATE・27 MINUTES AGO
WCPO 9 Cincinnati

What stores are open on Thanksgiving?

The biggest grocer in the Tri-State, Kroger, will be open for part of the day Thursday. While pharmacies will be closed, the company said its stores will be open until 5 p.m.
8 DAYS AGO