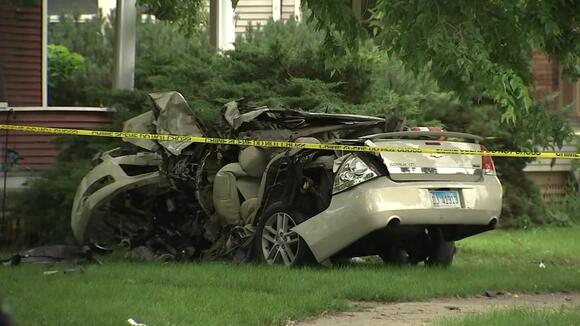 Two people were killed in a crash following a police chase in Aurora Friday morning. Aurora police said just before 9:30 a.m. officers conducted a traffic stop at South 4th Street and Galena Boulevard. They said the driver, a 28-year-old man from Wheaton, was wanted on several warrants, including one for armed robbery. The car's passenger, a 52-year-old man from Chicago, was wanted by the Illinois Department of Corrections. Police said when the officer told the passenger he was under arrest and to get out of the car, the driver took off southbound. Police gave chase, but the department said they stopped the pursuit because of how fast the fleeing car was driving. A short time later, police said they learned the car had been involved in a single-car crash near 4th and Ashland. "I heard the explosion. I came running out and I saw all the smoke," said Nikki Vandervort, resident. "Somebody's leg was on the grass," said Livia Byrne. Neighbor Frances Sherman had just entered his house moments before the crash. "I ran outside right away and I looked in the car and I couldn't see anything," he said. "For about 10 seconds I was yelling 'Are you OK?' and then I saw the person's face and he died instantly on impact." "I saw a man running around the corner yelling, 'He's dead, he's dead,'" Vendervort said. Neighbor Jose Ortega told ABC7, with the help of a translator, that the car appeared to be going about 90 miles an hour, even though the street is a 20 miles per hour zone. The crash and deaths are being investigated by the Kane County Major Crimes Task Force Officer-Involved Death team. No further details have been released.

Sauganash crash: Boy, 5, dies after being hit by 2 cars on Far NW Side, Chicago police say

Boy, 5, critically injured after being struck by 2 cars on Far NW Side, CPD says

A 5-year-old boy is in critical condition after being hit by two cars on the Far Northwest Side Wednesday night.
CHICAGO, IL・8 HOURS AGO
ABC 7 Chicago

Car stolen with 1-year-old inside on Near South Side, Chicago police say

Chicago police said a 1-year-old boy is safe after a car he was in was stolen on the Near South Side Wednesday afternoon.
CHICAGO, IL・14 HOURS AGO
ABC 7 Chicago

Community activists and residents have been reacting to the arrest of a man allegedly found near an Englewood park with several loaded weapons.
CHICAGO, IL・1 DAY AGO
ABC 7 Chicago

Investigators said a group approached the 17-year-old, then one of them pulled out a gun and started firing.
CHICAGO, IL・19 HOURS AGO
ABC 7 Chicago

Illinois State Police are responding to calls for video to be released of a reported road rage shooting on I-55.
CHICAGO, IL・9 HOURS AGO
ABC 7 Chicago

A truck fire on I-90 has halted traffic near Belvidere Wednesday morning.
BELVIDERE, IL・21 HOURS AGO

He tried to flee on foot but was apprehended by the Public Transportation Tactical Team, CPD said.
CHICAGO, IL・1 DAY AGO
ABC 7 Chicago

A truck hit an overpass on the Edens Expressway during the Wednesday afternoon commute.
SKOKIE, IL・19 HOURS AGO
ABC 7 Chicago

Family and friends of Anthony Alvarez have refused to back away quietly after the 22-year-old father was shot and killed by Chicago police in 2021.
CHICAGO, IL・18 HOURS AGO

Chicago police said a man on a one wheel skateboard is terrorizing women in the city, groping at least two on the street.
CHICAGO, IL・8 HOURS AGO
ABC 7 Chicago

A 22-year-old Chicago man has been charged in an expressway shooting last week that also involved a Chicago police officer.
CHICAGO, IL・2 DAYS AGO
ABC 7 Chicago

8-month-old girl found after being taken by suspect who broke into Irving Park home: CPD

CPD said the suspect hit a 17-year-old girl on the head before taking the baby.
CHICAGO, IL・1 DAY AGO
ABC 7 Chicago

Prosecutors said the damage amount was in the thousands from the incident.
CHICAGO, IL・2 DAYS AGO
ABC 7 Chicago

He was convicted of killing his wife and three young children after their bodies were found in the family's SUV just off I-55 in Channahon.
OSWEGO, IL・18 HOURS AGO
ABC 7 Chicago

A man was shot after approaching a suspect attempting to take something under the man's vehicle in the Rogers Park neighborhood, Chicago police said.
CHICAGO, IL・2 DAYS AGO
ABC 7 Chicago

The impact was so violent the car was broken up into pieces.
CHICAGO, IL・3 DAYS AGO