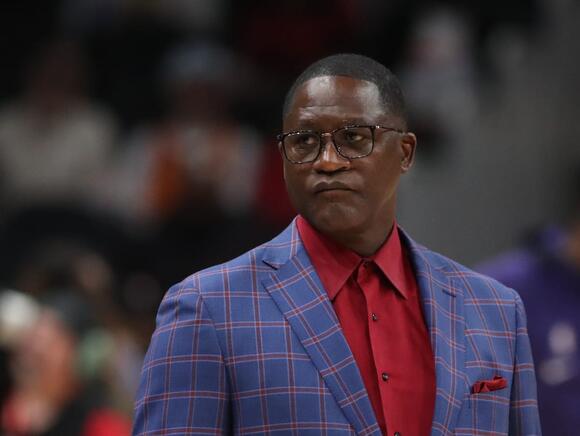 The Basketball Hall of Famer shares his thoughts on Takeo Spikes' podcast.

Few people on the planet are as interesting as Dominique Wilkins. When 'the Human Highlight Film' speaks, you listen. The Top-75 NBA legend appeared on Takeo Spikes' podcast, The Behind The Mask Podcast, and did not disappoint.

Wilkins shared stories about everything from cross-burnings in his front yard to partying with Prince in the 1980s. Every time the man speaks, I learn something new about his incredible life. But arguably, the best part of the interview was when Wilkins claimed that no current NBA player could guard him.

As you can see in the video above, the hosts press Wilkins on which (if any) players can stop him. Wilkins said, "This is just my attitude: one guy won't stop me - not by himself. Some of the great defensive players I played against - Rodman, Pippen, sorry ain't no one guy guarding me one on one. Not by himself"

When asked about Draymond Green, Wilkins said, "He would give me a good effort. I'm not being cocky or anything like that. It's just that's my mentality. That's how I played." Wilkins credited Green's defensive skills but stated that even Dennis Rodman needed help from his teammates to guard Wilkins.

Wilkins appearance on Spikes' podcast did not disappoint. We don't want to give away everything, so make sure you watch the entire episode in the YouTube video above. Stay locked into AllHawks.com for breaking news, highlights, and analysis.

Wilkins would have Green frustrated and fouled out by the 3rd quarter. Wilkins was one of the GREATS when they really played basketball. Green would get a tech on purpose to save himself from embarrassment 😂🤣😅

probably not... he was quick, strong. athletic, had a jump shot and could jump... and love the game... didn't mind playing hurt...

The Celtics employee with whom Ime Udoka had an affair helped make all his travel arrangements ... and that job sometimes included organizing travel for his fiancee, Nia Long. Sources connected to the couple and the NBA franchise tell TMZ ... one of the staffer's duties included planning Udoka's team-related travel, and we're told she was also involved in booking travel for Nia to come to Boston or to road games.
BOSTON, MA・2 DAYS AGO
Pelicans Scoop

CJ McCollum has a defined role as a leader of the New Orleans Pelicans.
NEW ORLEANS, LA・26 MINUTES AGO
AllPacers

The Pacers added a new veteran guard.
INDIANAPOLIS, IN・20 MINUTES AGO
All Hawks

Nas wore Trae Young's Atlanta Hawks jersey during a concert and shared the picture on Instagram.
ATLANTA, GA・13 HOURS AGO

The Atlanta Hawks and John Collins expressed a desire to put the trade drama behind them at NBA Media Day.
ATLANTA, GA・2 DAYS AGO
All Hawks

Everything we have learned from the first two days of Atlanta Hawks' preseason practices.
ATLANTA, GA・10 HOURS AGO
USA TODAY Sports Media Group

As the UNC football program looks to move past the Week 4 loss to Notre Dame and focus on Virginia Tech this week, head coach Mack Brown revealed some news about the roster in his Monday media session. The head coach told the media that kicker Jonathan Kim has opted to transfer from the program and seek a new team to join. Kim has appeared in four games this year, serving as a kickoff specialist while Noah Burnette handled the field goal duties. Per Tar Heel Illustrated, Kim wanted to be the primary placekicker and in order to save a year of...
CHAPEL HILL, NC・29 MINUTES AGO