What Next For Liverpool And Wales Youngster Ben Woodburn? 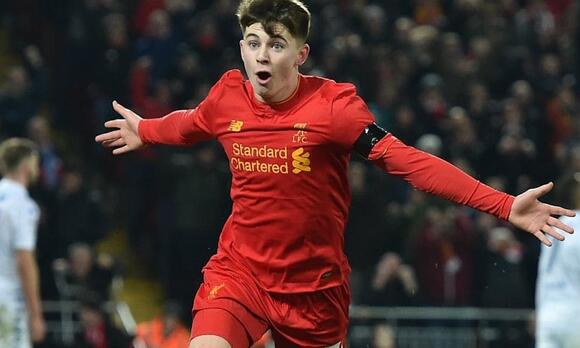 Ben Woodburn is one of seven senior and academy players that Liverpool have confirmed will leave the club this summer.

Ben Woodburn is one of seven senior and academy players that Liverpool have confirmed will leave the club this summer.

The 22-year-old became the Reds youngest ever goalscorer back in 2017 but has failed to sustain a regular place in the first team squad since, and following underwhelming loan spells at Blackpool and Hearts, his 15-year tenure at LFC is over.

Woodburn made his Premier League debut in November 2016 in a 2-0 victory over Sunderland at Anfield. He was just 17 years and 42 days old at the time, which made him the third youngest player to play for the Reds.

His display impressed Jurgen Klopp and the youngster made his EFL Cup debut just three days later, which was the night that he became Liverpool’s youngest ever goalscorer – a record previously held by Ballon D’or winner Michael Owen.

The Welshman came on with 25 minutes to play in the Reds league cup quarter-final against Leeds United, with the game goalless. Divock Origi netted the opener on the night, before Woodburn sealed the result with ten minutes to play. A cushioned set up from Georginio Wijnaldum found the number 58, who hammered home a half volley from eight yards at the famous Kop end – a goal that at the time, felt like the first of many.

He went on to feature nine more time for the Reds over the next six months and was thought to be a big part of Klopp’s plans for the following campaigns.

His performances for the Reds earned him a call up to the Welsh national side for their qualifiers against Austria and Moldova in September 2017, where after a win and four draws, the Dragons needed two victories to keep their chances of qualifying for the 2018 World Cup alive.

Woodburn was introduced with 20 minutes to play with the game goalless against the Austrians, and just five minutes after his arrival, he brought the ball down and fired a fierce 25-yard effort into the bottom left-hand corner of the goal, to send the Cardiff City Stadium wild and the Welsh faithful into dreamland.

Soon after, the Reds boss described the Welshman - along with Rhian Brewster - as ‘the future’ of LFC…

But, despite setting the domestic and international stages alight at such a young age, the 2017/18 campaign didn’t work out as many hoped for the winger. In a season where he was expected to kick on and challenge for a place in the Reds side, he made just one appearance in all competitions for the senior team.

Although, he was rewarded with a long-term deal on Merseyside, which made Klopp’s feeling about his potential evident. In fact, after Woodburn put pen to paper, Klopp described him as having ‘the perfect balance of talent and attitude.’

Woodburn was sent out on loan to Sheffield United the season after, where he made just eight appearances before he was recalled by the Reds after he sustained an ankle injury. Over the next three seasons he spent time at Oxford United, Blackpool and Hearts, where he could only rack up 11 goal contributions in 65 matches, and had his fair share of injury troubles.

He has continually impressed for the Reds in their pre-season tours in recent years, and at the beginning of last season, Klopp personally asked him to postpone his loan move to Scotland so that he could feature for the Reds for the first month of the season. Pep Lijnders has also made his admiration for Woodburn clear, off the back of his pre-season appearances last year, he said: “The energy he brings to the team is exactly what we stand for.”

So, what went wrong for the Welshman on Merseyside?

Often, we see young talents with the world at their feet fail to progress as expected, largely due to the overwhelming amount of pressure put on them from fans and the media. Perhaps having the label of the LFC’s youngest ever goalscorer and the expectations that the title came with took its toll on Woodburn.

Although, it’s easy to forget just how good this Reds team is. Over the last four years, they’ve been among the very best in world football, and it has been a near impossible mission for any player, let alone a youngster, to break into the side.

There is no doubt a talented player in there, and at just 22, the Welshman may well get another pop at topflight football in the years to come. Reports suggest that Hearts are not planning on signing Woodburn permanently and it remains to be seen where he will play his football next season.

Inter Milan midfielder is 'very popular' amongst Premier League clubs according to a report.
PREMIER LEAGUE・2 DAYS AGO
LFCTransferRoom

Diogo Jota, Luis Diaz, and Darwin Nunez were all absent from Liverpool training on Thursday.
PREMIER LEAGUE・1 DAY AGO
LFCTransferRoom

Liverpool are back in action to face against a Brighton & Hove Albion side with a new manager. Will Jurgen Klopp's men be able to collect all three points at Anfield?
PREMIER LEAGUE・15 HOURS AGO

Portuguese midfielder, Ruben Neves, rejected attempts from both Liverpool and Manchester United to sign him from Wolverhampton Wanderers, according to a report.
PREMIER LEAGUE・1 DAY AGO
LFCTransferRoom

LFCTR take a look to why Gareth Southgate is making the biggest mistake of his England managerial career leaving Trent Alexander-Arnold out of the Qatar World Cup.
SOCCER・16 HOURS AGO
LFCTransferRoom

The 28-year-old midfielder is out of contract at Anfield next summer.
PREMIER LEAGUE・15 HOURS AGO
LFCTransferRoom

Liverpool manager explains why some of the criticism towards England right-back Trent Alexander-Arnold is unfair.
PREMIER LEAGUE・2 HOURS AGO

A quick look at how the Liverpool players representing their national teams fared over the last week.
PREMIER LEAGUE・2 DAYS AGO
LFCTransferRoom

A report from the Arsenal camp came out yesterday about promising Eintracht Frankfurt winger Jesper Lindstrom who is a key target for the London club. In a reported conversation with a Danish sports magazine recently he admitted to being a Liverpool fan..
PREMIER LEAGUE・2 DAYS AGO
LFCTransferRoom

Report: Liverpool Have Not Given Up On Christoper Nkunku Despite Chelsea Rumours

Liverpool are still in the mix to sign RB Leipzig's French forward Christopher Nkunku according to a report. The long term Jurgen Klopp target could find himself leaving the German side soon.
PREMIER LEAGUE・6 HOURS AGO
LFCTransferRoom

Liverpool target has already undergone a medical with the Blues according to Fabrizio Romano.
PREMIER LEAGUE・23 HOURS AGO
LFCTransferRoom

Brazilian's release clause could be lowered by Juventus according to a report.
PREMIER LEAGUE・1 DAY AGO
LFCTransferRoom

The latest Denmark attacker tipped for Europe's biggest stage has outlined his 'dream' to one day wear the famous red of Liverpool.
PREMIER LEAGUE・1 DAY AGO
LFCTransferRoom

The Liverpool defender was left out of Gareth Southgate's squad for the UEFA Nations League clash with Germany.
PREMIER LEAGUE・13 HOURS AGO
LFCTransferRoom

Portugal fell to Spain 1-0 yesterday and Liverpool's Diogo Jota asked to be taken off in the 79th minute. The reason for this provides some interesting insight into why Liverpool might be struggling this season.
PREMIER LEAGUE・2 DAYS AGO