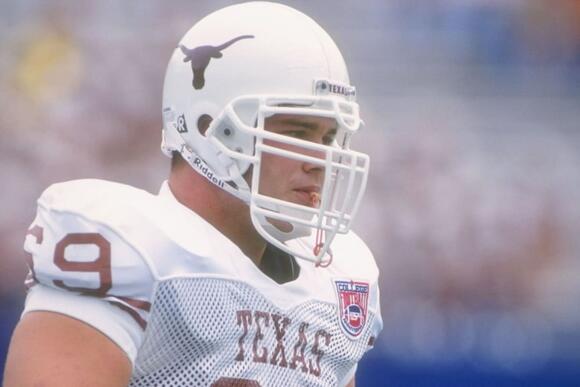 A pair of Longhorns legends are up for a major honor

The Texas Longhorns had a pair of legends from the football program added to the ballot for the 2023 College Football Hall of Fame on Tuesday, offensive lineman Dan Neil (1993-1996) and linebacker Derrick Johnson (2001-2004).

During his time with the Longhorns, Neil was named a consensus All-American and a first-team All-Big 12 performer in 1996.

He would go on to be selected in the third round of the 1997 NFL Draft by the Denver Broncos, where he would win two Super Bowls.

“I am first a foremost a Longhorn," Neil told Longhornscountry.com. "I am very proud anytime I have the fortunate honor to represent my Alma Mater. Being on the CFHOF ballot is truly an honor and privilege. When I see the other names like Derrick Johnson on the ballot I cant help but be in awe of the great players that are being recognized. To me, this is recognition of the great teammates I had the fortune of playing with. My name on this ballot represents the great Longhorn teams we played on and the Championships we won together.”

He was also named the winner of the Butkus, Nagurski and Jack Lambert Trophies in his final season.

He would go on to be named to four Pro Bowls and was a first-team All-Pro performer, after being selected with the 15th pick in the first round by the Kansas City Cheifs in the 2005 NFL Draft.

The final inductions for the class will be announced at the 65th NFF Annual Awards Dinner on Dec. 5, 2023, and the players are also set to be permanently immortalized at the Chick-fil-A College Football Hall of Fame in Atlanta, Georgia.

The Longhorns bounced back from their upset loss in a big way against the West Virginia Mountaineers
AUSTIN, TX・13 HOURS AGO
LonghornsCountry

Updated by the minute, our Cowboys NFL Moves, Free Agency and Trade Tracker: News and views on the roster-building effort
DALLAS, TX・28 MINUTES AGO
LonghornsCountry

The Longhorns lost a big playmaker from the 2023 class on Saturday.
AUSTIN, TX・19 HOURS AGO

The Cleveland Browns are set to take on the Atlanta Falcons inside Mercedes-Benz Stadium Sunday afternoon, but they'll do so with a few players on the sidelines.
CLEVELAND, OH・28 MINUTES AGO
USA TODAY Sports Media Group

Sam Ehlinger QB — Dallis Flowers CB — LB Shaquille Leonard, OT Bernhard Raimann and DT DeForest Buckner are active after being listed as questionable. Despite being elevated from the practice squad, DT Chris Williams is a healthy scratch. WR Dezmon Patmon is a healthy scratch for the second...
INDIANAPOLIS, IN・27 MINUTES AGO
LonghornsCountry

The Longhorns are pulling out all the stops against the West Virginia Mountaineers
AUSTIN, TX・15 HOURS AGO
LonghornsCountry

West Virginia Defensive Players to Watch vs. Longhorns in Week 5

West Virginia will have a new-look defense in 2022
AUSTIN, TX・2 DAYS AGO
LonghornsCountry

Longhorns backup quarterback Hudson Card is proving to be more than his title implies
AUSTIN, TX・12 HOURS AGO
LonghornsCountry

While Texas prepares for West Virginia, the Fan Nation Big 12 staff has its predictions for the rest of the league's games.
COLLEGE SPORTS・2 DAYS AGO

Steve Sarkisian: Longhorns WR Agiye Hall 'Will Have A Role' Against West Virginia

Sarkisian discussed the continued emergence of Hall and the role he might play in the Texas offense.
AUSTIN, TX・2 DAYS AGO
FastBreak on FanNation

Thon Maker has signed with the Fujian Sturgeons. The 25-year-old was the tenth overall pick in the 2016 NBA Draft by the Milwaukee Bucks.
NBA・31 MINUTES AGO
LonghornsCountry

NFL Sunday Ticket: Pricing, how to buy, and its future