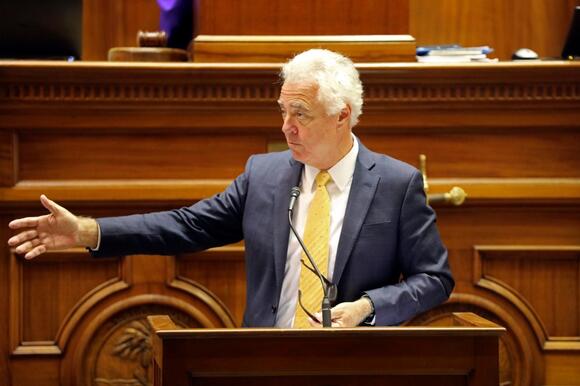 “The Lowcountry needs true conservatives who can win,” said Sen. Grooms (R-Berkeley County). “Conservative watchdog groups give Nancy an A+ rating in her first year. Not only that but Nancy also won this seat back for Republicans after her opponent lost it to a Democrat for the first time in 40 years. We can count on Nancy to keep this seat in Republican hands.”

She will face Katie Arrington, who lost the seat to Democrat Joe Cunningham in the November 2018 election, during Tuesday’s statewide primary.

“Senator Larry Grooms represents my hometown and many of my family and friends. He’s a conservative leader who works hard to make the Lowcountry a better place,” said Rep. Mace. “His leadership in the state house has greatly benefited the area I grew up in, and I’m grateful for his support. I look forward to continue to work with Senator Grooms to continue to make the Lowcountry a very special place.”

For the latest news, weather, sports, and streaming video, head to WCBD News 2.

COLUMBIA, S.C. (AP) — Whether conservative South Carolina changes its abortion laws at all in the wake of this year’s U.S. Supreme Court decision may be decided by divided conservatives Tuesday in the state House. South Carolina for decades was at the forefront of passing more restrictive abortion laws that challenged Roe v. Wade. before the landmark case was overturned this […]
U.S. POLITICS・1 HOUR AGO
WCBD Count on 2

COLUMBIA, S.C. (AP) — A South Carolina farmer is suing several state agencies in federal court on grounds they conspired to deny him his due process rights after authorities in 2019 destroyed his hemp crop, which was grown in unregistered fields. In a federal lawsuit filed Sept. 16, John Trenton Pendarvis alleges the South Carolina […]
DORCHESTER COUNTY, SC・18 HOURS AGO
WCBD Count on 2

CHARLESTON, S.C. (WCBD) – Dr. Annie Andrews, who is the Democratic nominee for 1st Congressional District of South Carolina, and Lisa Ellis, who is running for South Carolina State Superintendent, spoke to voters at Unitarian Church in Downtown Charleston Saturday about how they plan to help children excel if elected in November. “Children of South […]
CHARLESTON, SC・1 DAY AGO
WCBD Count on 2

COLUMBIA, S.C. (WCBD) – The South Carolina Emergency Management Division (SCEMD) on Monday encourages citizens to monitor Hurricane Ian as the storm carves a path to the United States. While the storm will not directly hit our coast, like it would be coming from the Atlantic Ocean, it could bring tropical storm force winds, heavy […]
CHARLESTON, SC・21 HOURS AGO

Why there is a billboard advertising California abortion services in SC

About a half mile away from the South Carolina State House in downtown Columbia, there is a billboard promoting abortion services available on the other side of the country.
CALIFORNIA STATE・3 DAYS AGO
WCBD Count on 2

ISLE OF PALMS, S.C. (WCBD) – Preparations for Hurricane Ian are underway across the Southeast, including on our islands and beaches as the storm marches closer to the Florida coast. Officials from local beach communities are urging residents and visitors to begin personal preparations now, but say they shouldn’t panic. Most remain in a wait-and-see […]
FOLLY BEACH, SC・12 HOURS AGO
WCBD Count on 2

Gov. McMaster signs bill aimed at keeping some children out of foster care with strangers

NORTH CHARLESTON, S.C. (WCBD) – Governor Henry McMaster held a ceremonial bill signing in North Charleston on Thursday expanding access to kinship care in the state. The legislation, S. 222, allows the South Carolina Department of Social Services (DSS) the ability to place a child with a relative or fictive kin who is not yet […]
NORTH CHARLESTON, SC・4 DAYS AGO
WCBD Count on 2

What impacts will Charleston see from Hurricane Ian?

MOUNT PLEASANT, S.C. (WCBD) – Hurricane Ian strengthened into a Category 3 storm before making landfall in La Coloma, Cuba early Tuesday morning. The storm will continue to intensify as it heads into the Gulf of Mexico where it’s expected to make a second landfall along Florida’s west coast, possibly as a Category 3 storm. […]
CHARLESTON, SC・1 HOUR AGO

BERKELEY COUNTY, S.C. (WCBD) – Berkeley and Dorchester counties are preparing for potentially heavy rain that would impact much of the Lowcountry later this week. The National Weather Service is forecasting heavy rain, gusty winds, and the risk for some tornadoes as Hurricane Ian makes its trek through parts of the southeast Thursday into Friday. […]
BERKELEY COUNTY, SC・17 HOURS AGO
WCBD Count on 2

Where to see fall colors in South Carolina

CHARLESTON, S.C. (WCBD)- Thursday marked the Autumnal Equinox–when the sun is directly above the Equator and day and night are of equal length–which signifies the first day of Fall. Fall ushers in chillier temperatures, shorter days, and a phenomenon that is synonymous with the season: the leaves changing color. Beginning in late September, leaves shed […]
TRAVEL・3 DAYS AGO
WCBD Count on 2

Tropical Storm Ian is expected to strengthen into a hurricane Monday as it continues to make a projected path toward Florida, according to the National Hurricane Center.
FLORIDA STATE・1 DAY AGO
WCBD Count on 2

BERKELEY COUNTY, S.C. (WCBD) – Officials recovered a body from the water at a Lake Moultrie boat ramp on Sunday.  According to the Berkeley County Coroner’s Office, the crews responded to reports of a body found in Lake Moultrie near the Hatchery Boat Landing.  BCCO says the body was found floating in the water.  BCCO […]
BERKELEY COUNTY, SC・23 HOURS AGO

NORTH CHARLESTON, S.C. (WCBD) – A Lowcountry expert addressed the importance of mental health screenings after a new recommendation from a national organization. This week, the U.S. Preventive Services Task Force issued draft statements recommending anxiety screening for adults under 65. It’s the first time this recommendation was made. “My reaction is, it should’ve been […]
MENTAL HEALTH・3 DAYS AGO
WCBD Count on 2

CHARLESTON, S.C. (WCBD) – Ian strengthened to a Category 3 hurricane early Tuesday morning and continues to intensify as it moves through Western Cuba, according to the National Hurricane Center (NHC). Though the Lowcountry coast may not see direct impacts from the storm, Ian has rapidly strengthened overnight and is expected to become a Category […]
CHARLESTON, SC・3 HOURS AGO
WCBD Count on 2

NORTH CHARLESTON, S.C. (WCBD) – It is National Rehabilitation Awareness Week, and one Lowcountry man is sharing his recovery story after surviving a motorcycle crash. “I just remember laying there. I could feel my leg was pointed in the wrong direction,” said Daniel Aldridge. The 22-year-old recalls the moment a car pulled out in front […]
SUMMERVILLE, SC・4 DAYS AGO
WCBD Count on 2

CHARLESTON, S.C. (WCBD) – Some local high school football games are being rescheduled this week in anticipation of severe weather and heavy rain on Friday. Much of the Lowcountry could begin feeling impacts from what is currently Hurricane Ian as it makes landfall in Florida and treks through parts of the southeast later in the […]
HIGH SCHOOL・19 HOURS AGO