Well apparently, if you can spot the second tiger in this trippy image, you're in the top one per cent of intelligent people – and it's much more difficult than you think.

Asides from the obvious striped cat in the middle of the jungle, there's another "hidden tiger" that's left people scratching their heads. 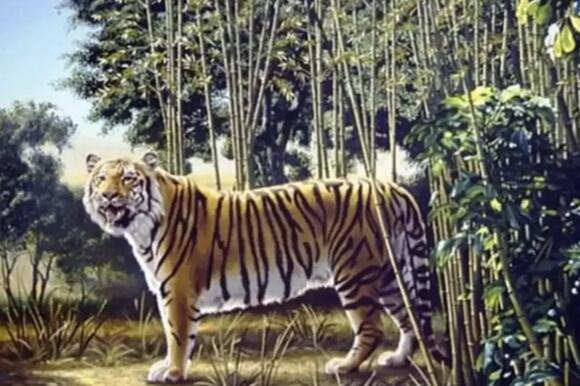 If you've spotted the hidden tiger in this image, then (apparently) you're smarter than most people.

Discussing the importance of optical illusions to better understand our brains, scientists Kim Ransley and Alex O. Holcombe, of the University of Sydney told The Conversation : “Visual illusions show us that we do not have direct access to reality,”

“They can also provide an inkling of the mental processing that delivers our experience of the viewable world.

“Indeed, it is the processing happening inside our brains that is the basis for many illusions.

“Rather than delivering information from our eyes in nearly raw form as a camera would, the brain tries to determine what is actually out there.

“When the information entering the eye is ambiguous, the brain must make educated guesses.”

Take a closer look at the tiger itself. More specifically, its torso.

The reason the optical illusion is so difficult to crack is because there is no image of a second tiger. In fact, it's the three words: "THE HIDDEN TIGER" stretched across its stomach and back leg.

For the most part, optical illusions are a bit of fun, but they also hold real value for scientists.

Have your say in our news democracy. Click the upvote icon at the top of the page to help raise this article through the indy100 rankings.

A woman was left with "the worst pain she had ever felt" from a "parasite" that burrowed into her eyelid.Louise Edwards woke up on 22 July with what she described as a spot above the skin on her right eye.Ms Edwards , of Allerton, Liverpool, thought she had been bitten by a bug but sought medical treatment after the wound got bigger.The 34-year-old mother went to St Paul's Eye Hospital in Royal Liverpool Hospital the following day and was sent home with antibiotics.Acting on the advice of a neighbour, Ms Edwards said she then used boiling water to...
DISEASES & TREATMENTS・3 DAYS AGO
Maya Devi

A video of a newborn baby with redness and cracks on the skin has gone viral because of its ‘alien-like’ appearance. People are calling it ‘demon child’ and ‘alien baby.’ According to the video, this unusual baby was born to Sajeda, wife of Shafiq, in the Ratlam district of Madhya Pradesh, a state in India.
1 DAY AGO
Indy100

Scientists have been left baffled after finding unexplained lines of identically-shaped holes on the ocean floor and has asked the internet for help.The unexplained holes on the seabed were found by the US’s National Oceanic and Atmospheric Administration (NOAA) Ocean Exploration team 1.7 miles below the Atlantic Ocean's surface.While the lines of holes have previously been recorded in the area, their origin has proved to be a mystery.The organisation asked Facebook users to “get out those scientist hats” and to come up with their best hypothesis as to where the holes could have come from.In a post on its Facebook...
SCIENCE・4 DAYS AGO
Indy100

A spooked homeowner is giving away a "cursed fridge" haunted by the soul of their stepmother.Locals said posters advertising the appliance popped up in a number of locations in London, including near Old Street tube station.The bizarre poster claims to be from a worried person who is giving away the doomed kitchen appliance because it is cursed.It stated: "My stepmother had a heart attack on our kitchen floor in the middle of an electrical storm, and her soul was transferred in to the computer unit of our smart fridge."She has been subtly undermining me ever since, commenting on how many...
U.K.・3 DAYS AGO

Just when the UK heatwave couldn't get any worse: a huge wasp invasion is on the way

Brits have been warned that another heatwave is on the way, but that's not the only thing the public has to contend with as the rising temperatures are set to cause a huge wasp invasion.The hot and dry summer weather without any rainfall is expected to continue with highs of 35C in a heatwave that is set to last longer than the record-breaking scorcher last month.While we may be struggling with the heat, it's the perfect environment for wasps that build nests in different areas from underground as well as up in trees and in the attics of homes as...
ANIMALS・5 HOURS AGO
Indy100

The International Shark Attack File (ISAF) has released a map showing where ocean swimmers are most likely to be attacked by sharks.On the ISAF's website, users can use an interactive map to see where shark attacks are occurring frequently and find out how fatal or non-fatal those shark attacks are. The database is housed at the Florida Museum of Natural History and uses investigations into unprovoked shark attacks to document and monitor shark attacks globally.According to the map, the US and Australia have the most frequent shark attacks with Florida having the most overall. Sign up for our free Indy100...
FLORIDA STATE・2 DAYS AGO
Indy100

The Royal Edinburgh Military Tattoo has welcomed back fans for the first time since 2019.The Tattoo, which was last held at Edinburgh Castle before the pandemic, will see nearly 1,000 performers entertain visitors throughout August.Performers from across the world are taking part in this year’s show Voices, which creators said has been inspired by people around the globe who, despite being separated, continue to connect and share their voices creatively.On Thursday the Princess Royal told participants of the military spectacle she was “hugely grateful” to those who had “risen to the challenge” of performing in the event.She said: “It is a great shame we have not been able to do this for the last couple of years.”The show, which runs until August 27, ends with a bang as fireworks will light up the skyline over the 3,000-year-old fortress.
U.K.・3 DAYS AGO
Indy100

The next two titles in the Pokemon series, Scarlet and Violet are going to be arriving on Nintendo Switch consoles on 18 November 2022. While the internet was busy falling in love with Lechonk, a recent reveal of one of the mascots (the monsters featured on the game’s cover), has driven the internet into a frenzy for very different reasons. During a recent presentation, it was revealed that Koraidon and Miraidon, who feature on the box of Scarlet and Violet respectively, will join players on their journey at the beginning of the game and can be used as modes of...
VIDEO GAMES・3 DAYS AGO

What is the vabbing trend that has taken over TikTok?

"Vabbing" is the latest trend taking over TikTok, and it's certainly gained everyone's attention after learning what the term entails...TikToker Mandy Lee @oldloserinbrooklyn went viral when she explained how the vabbing trend was all about ditching your favourite fragrance in favour of your bodily fluids.Basically, Lee said explained that the word which merges the words "vagina" and "dabbing" and is where women's vaginal fluids secrete pheromones and vabbing is where you wear those fluids on your neck, chest and wrists like a perfume to attract dates.Sign up to our free Indy100 weekly newsletter "I swear if you vab you will...
BEHIND VIRAL VIDEOS・4 DAYS AGO
Indy100

A hotel worker has warned people against using remote controls, glasses, and bedspreads in hotels.Posting on TikTok, she spoke of the things she would never do in a hotel, and she made hotels sound pretty gross.She warned: "I would never use the remote control without first wiping it down with my own Clorox wipe. Your cleaning and my cleaning are different cleaning, you feel me?"She added she would "never use the glasses in the room... without washing them first",And she revealed: “I would never sit on the bedspread. I would never make myself comfortable on the bedspread. That thing comes...
TRAVEL・2 DAYS AGO
Indy100

A renowned physicist was forced to apologise after sharing a photo of a chorizo slice, passing it off as a star taken from NASA's James Webb telescope. French Atomic Energy Commission research director Etienne Klein shared the image on Twitter with the tweet: "Photo of Proxima Centauri, the closest star to the Sun, located 4.2 light years from us."She was taken by the JWST. This level of detail… A new world is revealed day after day."Sign up to our free Indy100 weekly newsletter \u201cPhoto de Proxima du Centaure, l\u2019\u00e9toile la plus proche du...
AEROSPACE & DEFENSE・3 DAYS AGO