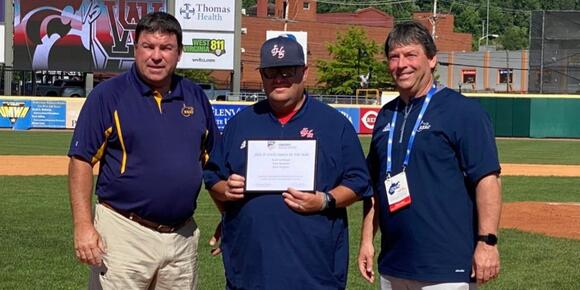 Independence skipper Scott Cuthbert admitted that he never expected to be a head baseball coach.

However, since taking over in Coal City back in 2013, Cuthbert has made sure that the Patriots were one of the top contenders in Class AA each season.

Saturday afternoon in Charleston he received recognition for his team’s success.

Prior to the Class AAA state tournament semifinal at Appalachian Power Park, Cuthbert was honored by the National Federation Coaches Association at the West Virginia Baseball Coach of the Year for 2021.

“It is definitely a big honor, but when I found out, it surprised me a little bit. I was kind of shocked,” Cuthbert said. “Everybody calls it a Coach of the Year award, but to me, it should be coaching staff. I wouldn’t be here without the assistants I have had and the help I have had over the years.”

“(Mark Cuthbert and Mark Ward), along with Shawn (McKinney) has been a big help recently,” Cuthbert continued. “Before them, I had a previous head coach, Chris Walls, as an assistant who helped me get my feet wet. I also had Coach (Ken) Adkins, our softball coach, that helped me the next year and Mike Horton has been around here too. I have had a lot of help over the years.”

If there ever was a person that was tailor-made to be head coach at Independence, Cuthbert was one of the most likely choices. Cuthbert played and graduated from Independence, but the ties went even deeper.

Cuthbert’s dad, Scotty and Coach Goddard played high school and American Legion baseball together and were longtime coaches at Independence.

Both have naturally been a big influence for Cuthbert over his time as head coach.

“Coach Goddard had a big influence on me, as well as my dad. It has been a special situation the last couple of years,” Cuthbert said. “To have dad here to fall back on for certain things with the experience he has had with it has been a big help. He sometimes sees things differently than others. Sorta like somebody that can play music when they hear it. If he sees something he will try to copy it.”

Not knowing quite what to expect fully when he took over, Cuthbert has been pleased with the success his teams have experienced.

“To be honest, I think we have exceeded what I thought we might be able to do. I knew we would be really good the first couple of years,” Cuthbert said. “I was probably the most satisfied the next year. We lost seven starters and made it to the regional final. We have been able to keep it going for a while.”

White Sulphur Springs – Shady Spring head coach Ronnie Olson wasn’t concerned when his team trailed by seven points in the second half of its game against Cabell Midland on Friday, explaining his squad has produced a run in every game over the last four years. Saturday the...
SHADY SPRING, WV・6 HOURS AGO
Lootpress

White Sulphur Springs – The chants of “We’re No. 1” rang from the behind Mingo Central’s bench Saturday evening at The Greenbrier, summing up the evening perfectly. In the third matchup this season of the top two ranked teams in Class AA, No. 2 Mingo Central took the rubber match with No. 1 Wyoming East, earning A 45-39 victory at Colonial Hall and with it the Battle for the Springhouse championship.
WHITE SULPHUR SPRINGS, WV・7 HOURS AGO
Lootpress

White Sulphur Springs – Maddie Clark’s ballet days are behind her but she still knows how to perform in a ballroom. The junior all-stater scored nine of her 23 points in a decisive second quarter as Class AA No. 1 Wyoming East defeated Class AAA No. 5 Nitro 69-46 in the ballroom of Colonial Hall at the Battle for the Springhouse at The Greenbrier.
NITRO, WV・1 DAY AGO
Lootpress

Prep Basketball: Greenbrier East comes up short against Cabell Midland at the Battle for the Springhouse

Cabell Midland stormed back from a 40-31 deficit after three quarters to defeat Beckley 58-55. Jayden Allie scored a game-high 30 points to lead Cabell Midland. Allie drilled seven shots from behind the arc. Three of the triples came in the final quarter where she scored 15 points. Josie Cross...
BECKLEY, WV・8 HOURS AGO
Lootpress

White Sulphur Springs – Ronnie Olson figured the law of averages would work in his team’s favor. His Shady Spring squad missed 12 layups in the first half and Cabell Midland star Dominic Schmidt made contested jumper after jumper, each seemingly more difficult than the last. It’s unknown...
WHITE SULPHUR SPRINGS, WV・1 DAY AGO
Lootpress

Prep Basketball: Greenbrier East holds on to beat Nitro at the Battle for the Springhouse

White Sulphur Springs – Greenbrier East senior Cadence Stewart admitted being a little frustrated heading into Saturday’s consolation game at the Battle for Springhouse Tournament inside Colonial Hall at The Greenbrier. The future A-B Battler was all smiles after the game. Pouring in a game-high 24 points, including...
LEWISBURG, WV・12 HOURS AGO
Lootpress

White Sulphur Springs – The scenario Friday night looked very familiar to Greenbrier East. Give up an early lead and come storming back. Unfortunately for the Spartans, this time they fell behind one time too many. After surrendering an 11-point second quarter deficit, Class AAAA No. 2 Parkersburg South...
LEWISBURG, WV・1 DAY AGO
Lootpress

Brushfork – Bluefield made an 18-point lead after three quarters stick, earning a 60-50 win over sectional for Wyoming East. Caleb Fuller scored 17 points to lead the Beavers while Will Looney added 16. R. J, Hairston rounded out the double figures scorers for Bluefield with 11. Garrett Mitchell...
BLUEFIELD, WV・1 DAY AGO
Lootpress

MORGANTOWN, WV (LOOTPRESS) – NBA great Charles Barkley’s special guest appearance at the 2023 Bob Huggins Fish Fry was a slam dunk, scoring a record crowd and more than $1.8 million to support the WVU Cancer Institute and Remember the Miners. The Fish Fry, now in its 11th...
MORGANTOWN, WV・16 HOURS AGO
Lootpress

FAIRMONT, WV (LOOTPRESS) – One Marion County family has donated $25,000 to create a scholarship for Fairmont State University student-athletes. The Mary Jo and Coach Rusty Elliott Endowed Athletic Scholarship is intended to retain established players to ensure they can complete their degrees. “The most important thing for any...
FAIRMONT, WV・16 HOURS AGO
Lootpress

MEADOW BRIDGE, WV (LOOTPRESS) – Meadow Bridge High School will be presented with an award Tuesday acknowledging 85% voter registration among students of the senior class – an award the school’s students will have earned for the 29th consecutive time. But what’s more, Meadow Bridge has gone...
MEADOW BRIDGE, WV・20 HOURS AGO
Lootpress

FRENCH CREEK, WV (LOOTPRESS) — Get ready for an early spring. French Creek Freddie, West Virginia’s most popular weather-predicting mammal, called for warmer temperatures during his annual Groundhog Day celebration at the state’s Wildlife Center in Upshur County on Thursday. “When it comes to predicting the weather,...
UPSHUR COUNTY, WV・2 DAYS AGO
Lootpress

MAN, WV (LOOTPRESS) – One person is dead after a single-car crash. On Thursday, February 2, 2023, members of the Logan Detachment responded to a single-vehicle crash on Route 10, just north of Man, WV. Upon arrival, Troopers found the driver had ran off the roadway and crashed. Troopers...
MAN, WV・2 DAYS AGO
Lootpress

MINGO COUNTY, WV (LOOTPRESS) – According to the Mingo County Sheriff’s Office, two men are now behind bars after a drug bust in the county Friday. Deputies say that Elijah E. Hall of Williamson and Kyree D. Prather of Cincinnati, OH were arrested by Sheriff Joe Smith and Deputies in Goodman Hollow on several charges.
MINGO COUNTY, WV・16 HOURS AGO