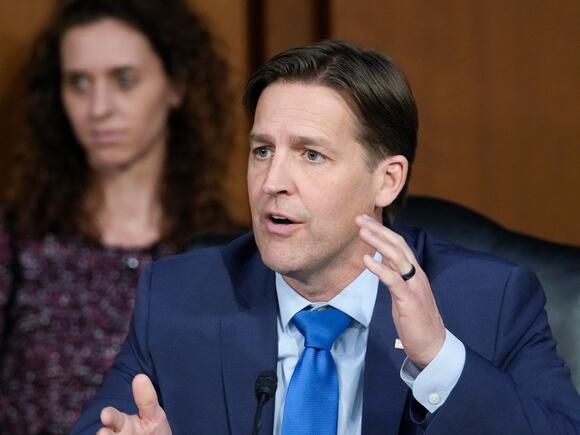 Sasse's remarks were part of a nearly hour-long speech Thursday night at the Ronald Reagan Presidential Foundation and Institute's "A Time for Choosing" speaker series . The series at the California presidential library centered on the future of the Republican party.

The Nebraska senator used the platform primarily to criticize his party for appealing too heavily to a small population of aging TV viewers, saying the strategy lacked longevity.

"Politicians who spend their days shouting in Congress, so they can spend their nights shouting on cable, are peddling crack – mostly to the already addicted, but also with glittery hopes of finding a new angry octogenarian out there," he said.

Sasse claims that less than 2% of the country watches cable on any given day.

"And this 2% is not remotely representative of the country. The median age of an MSNBC viewer is 68. CNN, basically the same," said the senator. Insider was unable to confirm that percentage. However, 2021 data from Neilson found that in 2021, the median age for both Fox and MSNBC viewers was 68 years old. The CNN median age was 64 so far this year, according to the Washington Post.

A February 2022 survey conducted by Statista , a data provider, found that 21% of US adults relied on cable to get their daily news, while 36% said that they never used cable news for news.

"Fox evening programming has an even more geriatric audience. Gen-Xers and Millennials and Zoomers (the generations that make up our entire future) are not listening to any of the fanservice media," he continued.

The Nebraska Senator also took issue with using social media to send out messages to the public. He brought up the topic again at the Thursday event, saying "Political Twitter isn't real."

Sasse had previously spoken about the intersection between social media and politics while also calling out members of both parties , including Reps. Alexandria Ocasio-Cortez, Matt Gaetz, and Marjorie Taylor Greene.

"The vast majority of traffic on Twitter is driven by well under 2% of the public. And yet politicians – again, left and right are barely distinguishable – in seeking to cater to this tiny minority and the algorithms that drive addicted-engagement," the Republican claimed in his speech.

"Nonetheless, the loudest politicians and the media demagogues who enable and encourage them still daily go viral just by preaching to their little siloed choirs," he added.

Biden "immediately handed the staffing of his White House to far-left 20-somethings and a chief of staff who literally lives on Twitter," Sasse said in his Reagan Library speech. "That is Ron Klain's constituency."

A former Mike Pence aide said it's "absurd" that Donald Trump claimed he can declassify documents with his mind. "If you're the president of the United States, you can declassify just by saying, 'It's declassified,'" Trump said earlier this week. Marc Short, former chief of staff to Pence, said it...
POTUS・2 DAYS AGO
Business Insider

Trump said he didn't "understand" why DeSantis wasn't more appreciative of him, per a WaPo report. "I knew him from watching Fox, and he'd done a good job about me and other things," Trump said of DeSantis. Per the report, Trump advisors are looking for weaknesses in a potential 2024...
FLORIDA STATE・2 DAYS AGO
Business Insider

Donald Trump called Mitch McConnell a "piece of shit," according to a forthcoming book by Maggie Haberman. The former president said he thought congressional leaders would rule "with an iron fist." Trump spoke with Haberman for her book "Confidence Man: The Making of Donald Trump and the Breaking of America."
POTUS・2 DAYS AGO
Business Insider

McConnell's support for the Senate bill to reform the Electoral Count Act comes just days after all but 9 Republicans voted against the House version.
PRESIDENTIAL ELECTION・17 HOURS AGO

Trump told Maggie Haberman that Lindsey Graham "kisses my ass" to "endorse his friends." Haberman detailed a scene at Bedminster with Trump and an effusive Graham in the vicinity. Over the past seven years, Graham has morphed from Trump critic to confidant. During the 2016 Republican presidential primary, Sen. Lindsey...
POTUS・2 DAYS AGO
Business Insider

Dr. Oz is getting dragged on Twitter for saying his Democratic opponent John Fetterman looks like he's 'kicking authority in the balls'

Republican Senate candidate Dr. Mehmet Oz is getting mocked on Twitter after his insult backfired. Oz took a jab at Fetterman, saying his wearing of hoodies made him look like "the man." Some Twitter users said Oz's insult was more of an unintended compliment. Dr. Mehmet Oz, a Republican Senate...
PENNSYLVANIA STATE・1 DAY AGO
Business Insider

Patriarch Kirill I said Russian soldiers who die in the war will be absolved of "sins." The Sunday sermin came days after Russia announced the mobilization of 300,000 troops. Kirill is known to support Russian President Vladimir Putin and the invasion of Ukraine. The leader of the Russian Orthodox Church...
RELIGION・1 DAY AGO

Rep. Nancy Mace says there's "a lot of pressure" on Republicans to impeach President Biden. On NBC's Meet The Press, Mace said impeachment is being considered by some in the GOP. She told host Chuck Todd that if the party chooses to hold a vote, she believes it will be...
CONGRESS & COURTS・2 DAYS AGO
Daily Mail

Former liberal MSNBC host and sportscaster Keith Olbermann revealed on Monday that he'd dated Democratic Arizona Senator Kyrsten Sinema over a decade ago. Olbermann, who currently hosts a podcast, didn't spare his disappointment with the moderate senator, claiming that she previously was even more liberal than him. The ex-SportsCenter and...
ARIZONA STATE・1 DAY AGO
Business Insider

Donald Trump once said New York Times reporter Maggie Haberman was like his "psychiatrist." Haberman said that while Trump treats many people like his psychiatrists, "almost no one really knows him." Haberman covered Trump's presidency extensively and interviewed him for her forthcoming book. Former President Donald Trump said reporter Maggie...
POTUS・2 DAYS AGO
Business Insider

Trump has informed some political donors to stop boosting Ron DeSantis, per The Washington Post. During his calls with donors, the ex-president said that DeSantis could be a potential 2024 rival. Trump's endorsement of DeSantis' 2018 gubernatorial bid was a key moment in the governor's political rise. Former President Donald...
FLORIDA STATE・2 DAYS AGO

Trump mistook a racially diverse group of congressional aides for waitstaff in 2017. Then-Chief of Staff Reince Priebus had to save the president from the gaffe, according to a new book by NYT's Maggie Haberman. Trump also accused "illegals" of making him lose the popular vote in 2016, per Haberman's...
POTUS・9 HOURS AGO
Business Insider

A former CIA officer said Vladimir Putin had been backed into a corner over his war in Ukraine. Robert Baer told CNN the Russian leader was unlikely to deescalate, given all his setbacks. Baer also said the chances that Putin might turn to tactical nuclear weapons were increasing. As military...
MILITARY・23 HOURS AGO

DeSantis thinks Chris Christie "missed his moment" in running for the White House in 2016, per WaPo. Christie passed on a 2012 campaign and opted to run in 2016, where he faced Donald Trump. DeSantis is up for reelection in November and could potentially launch a 2024 campaign of his...
FLORIDA STATE・2 DAYS AGO
Business Insider

Former GOP Rep. Denver Riggleman says his mother told him 'I'm sorry you were ever elected' via text after he criticized Trump: book

Denver Riggleman said his mother criticized him via text after he spoke out against Trump and QAnon. "You are now part of the swamp ... I'm sorry you were ever elected," she reportedly wrote to him. Riggleman, an ex-advisor to the Jan. 6 committee, detailed the exchange in his new...
VIRGINIA STATE・15 HOURS AGO
Business Insider

Reps. Adam Schiff and Liz Cheney, two of the House members investigating the events of January 6, 2021, said Trump was involved in the Capitol riot.
POTUS・2 DAYS AGO
Business Insider