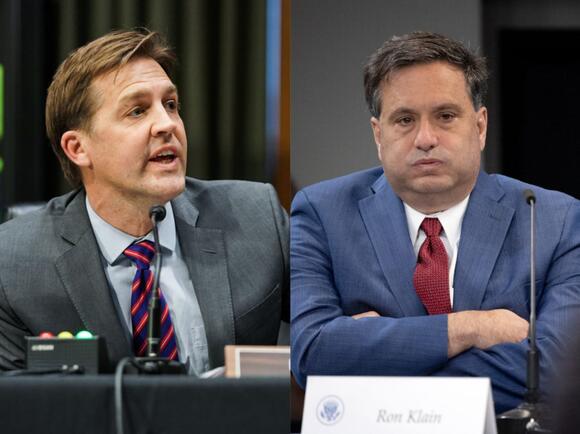 Republican Sen. Ben Sasse of Nebraska criticized White House Chief of Staff Ron Klain for being a frequent and conspicuous Twitter user in a speech at the Ronald Reagan Presidential Library in California on Thursday night.

Sasse said that following his election in 2020, President Joe Biden "immediately handed the staffing of his White House to far-left 20-somethings and a chief of staff who literally lives on Twitter."

"That is Ron Klain's constituency," he added.

Sasse spoke at the library as part of the Ronald Reagan Presidential Foundation and Institute's "A Time for Choosing" speaker series , which has also hosted Sens. Tim Scott of South Carolina, Tom Cotton of Arkansas, and other major GOP figures in recent months.

The Nebraska Republican highlighted Klain's frequent use of the platform as emblematic of how the Democratic Party and the Biden administration are "disconnected" from the rest of the country, in Sasse's view.

Sasse also spent much of his speech — which was otherwise about the future of the Republican Party and a critique of so-called "isolationists" within it — describing how Twitter and social media have a negative impact on politics.

"Political Twitter isn't real," said Sasse. "Only 22% of Americans use it, and more than half of the one-fifth of Americans who use Twitter never follow politics on it."

"The vast majority of traffic on Twitter is driven by well under 2% of the American public," he added. "And yet politicians — again left and right —  are barely distinguishable in seeking to cater to this tiny minority and the algorithms that drive their addicted engagement."

Sasse was once one of Congress's most frequent and prolific Tweets himself before notably quitting in 2017. He told Insider at the time that he decided to take a "longer-than-just-Sunday social media Sabbath" but found that after four days, it "felt pretty great."

Klain's frequent Twitter use has gotten the White House into trouble before, including when he endorsed an October 2021 tweet from economist Jason Furman that labeled inflation and supply chain issues as  "high-class problems."

"Senator Sasse talks a good game, but he was among the group that couldn't even find a way to support the bipartisan infrastructure bill that Mitch McConnell backed – so that tells you a lot about where he stands," said Bates.

Klain, who frequently tweets and re-tweets from the official @WHCOS Twitter account , defended his frequent use of the platform in a January interview with the Washington Post.

"Echo-chamber politicians drinking their own bathwater isn't entirely new, of course," he said. "But what is new — and something is new here — is the instant feedback loop of social media."

is he for real?? Was he upset when his old boss was on there constantly? Apparently Klein is behaving himself or they would have banned him like they did to delirious don.

Donald Trump said in a Truth Social post that Sen. Joe Manchin had gone "off the rails." He commented that Manchin should have joined the GOP "long ago." Manchin was invited by Senate Minority Leader Mitch McConnell to switch sides last December. Former President Donald Trump suggested on Wednesday that...
POTUS・2 DAYS AGO
Business Insider

Then-AG Bill Barr in 2020 told Trump that 'people are tired' of the 'drama,' new book says

Attorney General Bill Barr tried to get President Trump to scale back his personal attacks on others, a new book says. "People are tired of the fucking drama," Barr told Trump in 2020, according to a Washington Post excerpt of "Confidence Man." Advisors were worried his behavior would hurt his...
POTUS・3 DAYS AGO
Business Insider

Trump wrote that he knew 'nothing' when asked about the presidential transition delays with Biden officials after the 2020 election: book

Trump wrote that he knew "nothing" about transition delays with Biden officials, per a forthcoming book. In "Confidence Man," NYT reporter Maggie Haberman remarked on Trump's responses to myriad questions. When Haberman asked Trump about the Biden transition holdup, he replied: "KNOW NOTHING ABOUT IT." Former President Donald Trump wrote...
PRESIDENTIAL ELECTION・2 DAYS AGO
Business Insider

Trump told Rudy Giuliani to 'go wild' and 'do anything you want' in seeking to overturn the 2020 presidential election: book

Trump told Giuliani he could "go wild" in challenging the 2020 results, per a forthcoming book. In "Confidence Man," NYT reporter Maggie Haberman detailed how Trump placed his faith in Giuliani. "My lawyers are terrible," Trump reportedly said of many of the other attorneys on his team. President Donald Trump...
PRESIDENTIAL ELECTION・3 DAYS AGO

Six states claim student-loan relief will hurt tax revenue, that Biden doesn't have the authority to cancel debt, and are seeking to pause the plan.
NEBRASKA STATE・1 DAY AGO
Business Insider

Trump blamed his supporters in 'the radical right' as the reason he didn't get the credit he thought he deserved for COVID vaccines while advising politicians not to 'make a big deal' out of the pandemic, book says

A new book reveals that former President Donald Trump told his aides not to wear masks in his presence. The book, by reporter Maggie Haberman, also said Trump told aides to avoid discussing the pandemic on TV. Haberman's book also reported that he told then-Gov. Andrew Cuomo not to "make...
POTUS・2 DAYS AGO
Business Insider

A Russian soldier was recorded saying he was told to 'kill everyone we see' in Ukraine, including civilians, which is a war crime, according to audio obtained by The New York Times

More than 4,000 recordings of Russian soldiers making calls from Kyiv were obtained by The New York Times. One Russian soldier told his girlfriend that he received orders to "kill everyone we see." UN investigators previously accused Russia of committing war crimes in Ukraine. One Russian soldier in Kyiv recounted...
MILITARY・2 DAYS AGO
Business Insider

Ginni Thomas told the panel investigating the January 6 attack on the US Capitol that her husband is "uninterested in politics," CBS reported.
CONGRESS & COURTS・20 HOURS AGO

Trump officials sabotaged the Biden transition in petty ways, according to a new book by NYT reporter Maggie Haberman. One staffer stuffed photos of Hunter Biden into an air conditioning unit, causing it to break. "Confidence Man: The Making of Donald Trump and the Breaking of America" will be released...
PRESIDENTIAL ELECTION・6 HOURS AGO
Business Insider

Trump asked his aides to get the NYT reporter Maggie Haberman's phone records, Politico reported. Trump has long been fixated with Haberman and once called her his "psychiatrist." Her book about the former president, "Confidence Man: The Making of Donald Trump and the Breaking of America," will be released next...
POTUS・1 DAY AGO
Business Insider

As Hurricane Ian barreled toward the Gulf Coast, former President Donald Trump emailed his supporters about a very different situation in Florida — the FBI raid of his home, Mar-a-Lago. "It has already been proven that so much has been wrongfully taken," Trump said in the email. "It was...
FLORIDA STATE・2 DAYS AGO

Russian soldiers said they were 'fooled like little kids' and 'no one told us we were going to war,' audio obtained by The New York Times shows

Russian soldiers calling home from the frontlines in Ukraine complained about being misled and how poor the war was going, audio recordings show.
MILITARY・2 DAYS AGO
Business Insider

Donald Trump says Mitch McConnell has a 'death wish' and insults his wife, Elaine Chao, after the senator voiced support for the Electoral Count Act reforms

In August, Biden put out a statement, saying he and First Lady Jill Biden were "shocked and saddened," when Republican Rep. Jackie Walorski of Indiana died.
INDIANA STATE・2 DAYS AGO
Business Insider

The lawsuit, meant to halt student loan relief, said one borrower would be stuck with a big state tax bill. Now he just won't get his loans relieved.
POTUS・2 DAYS AGO

An Army major's wife had them read up on how to be a Soviet spy so they could leak sensitive US military medical info to Russia, prosecutors say

In a new federal indictment, prosecutors allege a Maryland couple tried to spy for Russia. The indictment says one of the accused told her partner to read the book, "Inside the Aquarium." The book is by a former Soviet spy, Viktor Suvorov, who defected in the late 1970s. The wife...
MILITARY・1 DAY AGO
Business Insider

Six in 10 Americans think Congress is out of touch with climate change: poll

Six in 10 American adults think Congress is "out of touch" with climate change, an Insider/Morning Consult poll indicates.
ENVIRONMENT・21 HOURS AGO
Business Insider

Trump asked Obama how he kept his approval ratings high in 2016, according to a forthcoming book by NYT's Maggie Haberman. Trump posed the question when the two men first met in the Oval Office after he won the 2016 election. Trump publicly skewered Obama but was privately fixated with...
POTUS・2 DAYS AGO
Business Insider

Following the Mar-a-Lago raid, Trump asked for (and was granted) a special master to review government docs. In a new filing, his attorneys argued that vendors don't want to work with them because of the volume of documents. In the filing, they said that "seasoned IT professionals" can't meet the...
POTUS・2 DAYS AGO