Republican Sen. Ben Sasse says the GOP 'wants a strongman daddy figure' and 'exists increasingly as a vehicle for the grievances of the angriest, oldest folks' 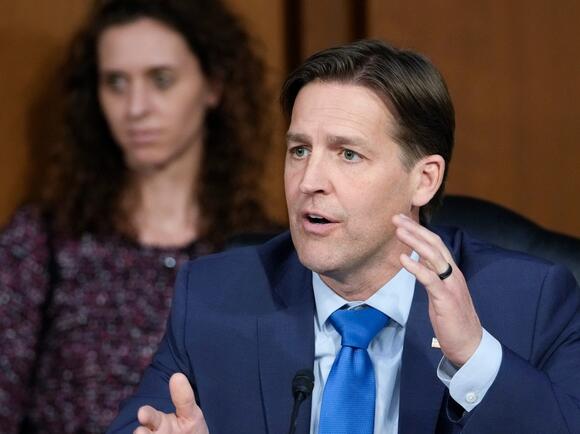 Sen. Ben Sasse of Nebraska gave a speech on Thursday evening that included heavy criticism of his own party, urging fellow Republicans to re-orient themselves away from the politics of grievance and towards a forward-thinking party in order to tackle global threats.

"The left wants a powerful, nameless but supposedly benevolent bureaucracy, the right wants a strongman daddy figure," said Sasse in a speech at the Ronald Reagan Presidential Library in California. "But the loudest of them all agree on one thing: America — the one the founders gave us, the one kept for us by our parents and grandparents —  it doesn't work anymore."

Sasse spoke at the library as part of the Ronald Reagan Presidential Foundation and Institute's "A Time for Choosing" speaker series , which has also hosted Sens. Tim Scott of South Carolina, Tom Cotton of Arkansas, and other major GOP figures in recent months.

Much of Sasse's speech included criticisms of the Democratic Party — which he says is "increasingly drunk on elite leftism" and has "little room for honest debate" — as well as President Joe Biden's August withdrawal from Afghanistan.

But the Nebraska Republican, a frequent critic of far-right figures like Reps. Marjorie Taylor Greene and Matt Gaetz as well as former President Donald Trump, had a lot to say about the Republican Party as well.

"We Republicans? We have a big choice to make," said Sasse. "We can either continue to drift as a party that exists increasingly as a vehicle for the grievances of the angriest, oldest folks, or we could be a future-focused party of 2030."

He also took aim at Trump, declaring that in 2016, American voters were presented with two candidates whose "fundamental diagnosis was really the same" and that both sought to victimize voters.

"The system's rigged, you're getting screwed, you're a victim, the country's going down the tubes," Sasse said mockingly. "You're victims."

Sasse was one of 7 Republican senators who voted to convict Trump for inciting an insurrection after January 6.

"President Trump lied that he 'won the election by a landslide.' He lied about widespread voter fraud," the Nebraska Republican said in a statement at the time. "Those lies had consequences, endangering the life of the vice president and bringing us dangerously close to a bloody constitutional crisis. Each of these actions are violations of a president's oath of office."

Meanwhile, Trump — still the undisputed leader of the Republican Party — recently said he never should have endorsed Sasse for re-election to the Senate in 2020.

"He's bad news, Ben Sasse," Trump said during a tele-rally in May. "He begged for my endorsement, the day after he started hitting me and we hit much harder than he knows how to hit."

Trump has railed against Sasse before as well, calling him a "loser," a "sleazebag," and a "quiet little boy" in a 2021 interview with The Federalist.

Totally agree with that. Another thing I don't get, the republicans wanted that, so now when a company speaks out against a law they pass, all hell breaks loose. Total control is their mantra now.

Yea. Repukes are rigging it as he speaks. And it’s humorous he blames Joe for trumps failure surrendering to the Taliban. EVER NOTICE AMERICA HAS TO REPEATEDLY RECOVER AFTER A REPUBLICAN HAS BEEN IN POWER??? Your party DESERVES to LOSE.

any republican who ignored the crimes and the evidence should be drummed out of the republican party...the gop needs to find a moral compass and learn how to follow it...and soon

Obama privately told reporters before leaving office that America would be 'okay' after one Trump term but said 'eight years would be a problem': report

"I would be concerned about a sustained period in which some of these norms have broken down and started to corrode," Obama said, per Bloomberg.
POTUS・5 HOURS AGO
Business Insider

Donald Trump said in a Truth Social post that Sen. Joe Manchin had gone "off the rails." He commented that Manchin should have joined the GOP "long ago." Manchin was invited by Senate Minority Leader Mitch McConnell to switch sides last December. Former President Donald Trump suggested on Wednesday that...
POTUS・2 DAYS AGO
The Independent

Donald Trump heads to Michigan, a state that spurned him in 2020 after he saw a surprise victory there four years earlier, on Saturday.He’s in the state for a rally in Warren where he hopes to bump the candidacy of Tudor Dixon, his chosen acolyte in the race to unseat incumbent Democratic Governor Gretchen Whitmer. The president is eager to have a supporter of his bogus conspiracies about his 2020 defeat in the governor’s mansion should he make another bid for the White House in 2024.Polls show Ms Dixon badly trailing the governor, who was the intended victim of...
MICHIGAN STATE・43 MINUTES AGO
Business Insider

Six states claim student-loan relief will hurt tax revenue, that Biden doesn't have the authority to cancel debt, and are seeking to pause the plan.
NEBRASKA STATE・2 DAYS AGO

Following the Mar-a-Lago raid, Trump asked for (and was granted) a special master to review government docs. In a new filing, his attorneys argued that vendors don't want to work with them because of the volume of documents. In the filing, they said that "seasoned IT professionals" can't meet the...
POTUS・2 DAYS AGO
Business Insider

Donald Trump could have a high-profile deposition in a class-action lawsuit delayed. This is because Trump is waiting out Hurricane Ian at his Mar-a-Lago residence in Florida. The lawsuit accuses Trump of promoting a scam multi-level marketing scheme. Former President Donald Trump's deposition in a class-action lawsuit, set for Friday,...
FLORIDA STATE・2 DAYS AGO
Business Insider

Who's turned against Trump? A list of current and ex-aides, lawyers, and confidants who have willingly (and unwillingly) cooperated with DOJ and congressional investigators.

Donald Trump is the subject of investigations led by the Justice Department, state officials, and congressional members. Here's who has cooperated.
POTUS・2 DAYS AGO

"What's bound them together is opposition to me," Obama said of the Republican Party during the waning days of his Democratic administration.
POTUS・7 HOURS AGO
Business Insider

In a blow to the NRA, judge allows New York's attorney general to seek a court-imposed monitor and demand Wayne LaPierre forfeit millions

NY AG Letitia James gets a green light to seek financial monitoring for the NRA and to pursue multi-million-dollar penalties from CEO Wayne LaPierre.
CONGRESS & COURTS・2 DAYS AGO
Business Insider

An Army major's wife had them read up on how to be a Soviet spy so they could leak sensitive US military medical info to Russia, prosecutors say

In a new federal indictment, prosecutors allege a Maryland couple tried to spy for Russia. The indictment says one of the accused told her partner to read the book, "Inside the Aquarium." The book is by a former Soviet spy, Viktor Suvorov, who defected in the late 1970s. The wife...
MILITARY・2 DAYS AGO
Business Insider

Six in 10 Americans think Congress is out of touch with climate change: poll

Six in 10 American adults think Congress is "out of touch" with climate change, an Insider/Morning Consult poll indicates.
ENVIRONMENT・1 DAY AGO

"Donald Trump has one mode, it is all offense all the time," Barbara McQuade told MSNBC on Saturday.
POTUS・6 HOURS AGO
Business Insider

Her lawyer said Thomas was "happy to cooperate with the Committee to clear up the misconceptions about her activities surrounding the 2020 elections."
MISSISSIPPI STATE・2 DAYS AGO
TheDailyBeast

Donald Trump says Mitch McConnell has a 'death wish' and insults his wife, Elaine Chao, after the senator voiced support for the Electoral Count Act reforms

He also insulted McConnell's wife, Elaine Chao, referring to her as the "China loving wife, Coco Chow."McConnell recently voiced support for changing the way Congress counts electoral votes. In the latest salvo from the ongoing feud between Donald Trump and Mitch McConnell, the former president posted what appeared to be...
KENTUCKY STATE・23 HOURS AGO

Ohio GOP candidate J.R. Majewski was demoted from military rank for drunk driving on a US airbase in Japan

Congress has moved to avert a government shutdown just hours before it would have begun. President Biden is expected to sign the bill into law before the midnight deadline. The legislation also contains funding for Ukraine, disaster relief, and heating assistance. House Democrats and ten House Republicans on Friday passed...
FOREIGN POLICY・1 DAY AGO
Business Insider

Lawmakers found a new excuse to not pass a stock trading ban before the midterms: not enough time to read the bill text