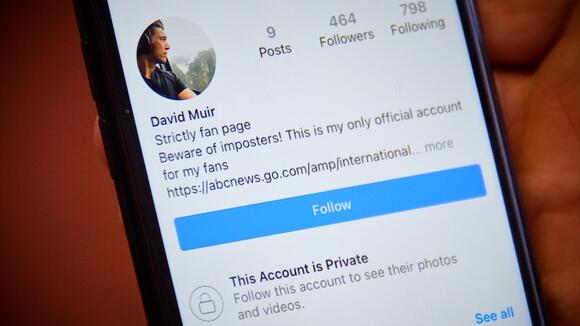 LEWIS COUNTY, N.Y. (WSYR-TV) — A woman in Lewis County lost $2,500 after paying for what she was told was an opportunity to meet ABC World News Tonight anchor and Syracuse native David Muir.

The scam started on Instagram, when an account using Muir’s name and picture, messaged Jan Taylor. She responded and was convinced to move the conversation to another app, Telegram.

The scammer went as far as sending Taylor a photo, manipulated to appear like David Muir is holding a framed photo of her. The scammers used multiple photos posted to Muir’s real Instagram account, including of his dog.

After some back-and-forth conversation, Taylor was offered a meet-and-greet opportunity. She was instructed to email “MeetingWithDM@gmail.com” to request a form.

Taylor asked how she could pay them and was told to download an app named “Cash.” After syncing her debit card, Taylor made multiple smaller transactions totaling about $2,500.

In an interview with NewsChannel 9, Jan Taylor said: “It’s a lot of money. That hurts. That hurts. But probably not as much as my pride, my self esteem.”

“The person had be under a spell,” Taylor said, “and I finally like woke up. ‘Wait a minute.'”

The spell continued as the scammers moved to text messages to Taylor, and got more aggressive.

“ Hello and Good morning, your presence will be needed in our office regarding your misbehaviors with our client David Jason Muir. From M&G security team.”

“ So why the sudden change of heart and plans with you? Causing him mental damage now he’s not able to concentrate like before at work. Except from live broadcasts. “

“ Soon our security team will come over to your place of work or your home. Do you won’t be surprised to see them “

Taylor said, “The financial loss is one thing but that bullying is almost worse.”

She filed a report with the Lewis County Sheriff’s Office, but local police departments don’t have a track record of tracking down international scammers or recouping victims’ money.

The investigator assigned to her case suggested Taylor delete the apps used in the scam.

The Federal Trade Commission reports social media was the most profitable method for scammers in 2021, resulting in $770 million in losses.

David Muir isn’t the only celebrity whose persona was abused to trick someone.

According to AARP, callers to its Fraud Watch Network Helpline found a pattern of scams connected to country music stars like Toby Keith, George Strait, Pam Tillis, Clint Black, Sara Evans and Travis Tritt, among others.

“It’s quite easy to fabricate or manufacture a fake persona,” says Christopher Brown, a lawyer for the Federal Trade Commission in an interview with NewsChannel 9.

He adds: “Unfortunately, it’s quite a target-rich tool that we’ve seen become increasingly popular amongst scammers.”

Brown has some advice for social media users , starting with slowing down. He says: “Ask yourself: is this really that person?”

He suggests people do online research, entering the celebrity’s name into a search engine with the word “scam” to find out if anyone else got similar messages.

Celebrity or not, the FTC advises to never sent money to anyone you haven’t met in person.

Brown says it’s nearly impossible get back money sent via gift card or digital app, as Taylor did to the person claiming to be David Muir.

She says she got lost in “the excitement of David Muir.”

SUNY Board Of Trustees discussed solutions to dipping enrollment rate

UTICA, N.Y. (WUTR/WFXV/WPNY) – After an enrollment decline of nearly 20% over the last decade, the State University of New York system is seeing its campuses stabilize this year, with a dip of just 1.9% since 2021, according to data released on last Wednesday’s board of trustee meeting. Although enrollment across the SUNY system is […]
UTICA, NY・2 DAYS AGO