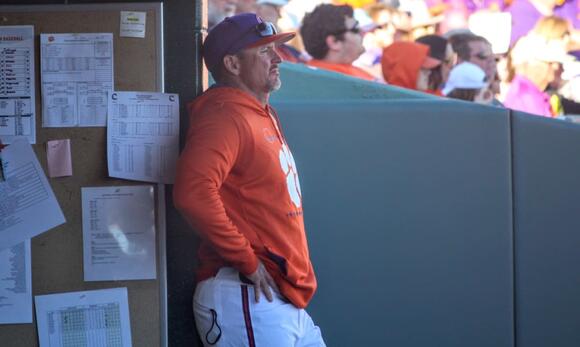 Former Clemson Tiger Alex Urban said he was pretty shocked when he heard that Monte Lee had been fired from Clemson.

There were some mixed reactions to Clemson's decision to move on from head coach Monte Lee on Tuesday.

After the Tigers missed out on the NCAA regionals f or a second consecutive season for the first time since the 1980s, some inside the fan base were ready for a change, while others were hoping Lee would get at least one more season to right the ship.

Count former Clemson OF/DH Alex Urban among those that were surprised to hear that Clemson had decided to go in a different direction . Urban spent one season with the Tigers in 2021 and was a key reserve, hitting 3 home runs, including the program's first-ever walk-off pinch-hit home run against Georgia Southern.

"I mean, I was pretty shocked," Urban told Thomas Grant of the Lexington County Chronicle . "I mean obviously, some things need to be changed around there. They have people who make those decisions, doing what's best for the school. You just kind of gotta live with it."

Lee just finished up his seventh season with the program, going 35-23. After starting 2-9 in ACC play, the Tigers did not clinch a spot in the ACC Tournament until the final weekend of the regular season, then went 0-2 in Charlotte, being outscored 27-8 in losses to North Carolina and Virginia Tech. However, due in part to having the 17th toughest schedule in the country, the Tigers were able to finish ranked No. 34 in the RPI.

When asked if he thought Clemson did enough to warrant inclusion into the 64-team field, Urban said that was a tough question to answer.

"That's kind of a tough subject," Urban said. "I mean, there were certain aspects that were better than others. It's a tough call for people to make especially if the program has been very good in the past. It makes those decisions a lot more difficult whenever you don't have a year that you expect to have."

With Lee's tenure at Clemson coming to an end, Urban is anxious to see what is next for his former head coach and is confident that Lee will be successful wherever he lands.

"He's good, he's a good guy," Urban said. "He knows a lot about hitting, a lot about the game as well. He will definitely be successful wherever he ends up."

With NC State Up Next, Uiagalelei and Clemson Offense Getting Swagger Back At Right Time

Clemson's offense, led by DJ Uiagalelei, is hitting its stride at an opportune time seeing as the Tigers face one of its stiffest challenges to date this weekend, as NC State brings its veteran-laden defense to Death Valley.
CLEMSON, SC・14 HOURS AGO
AllClemson

The Atlantic Coast Conference announced Monday that offensive tackle Jordan McFadden (Co-Offensive Lineman of the Week) and quarterback DJ Uiagalelei (Quarterback of the Week) have earned ACC Player of the Week honors for their performances in Clemson’s thrilling 51-45 double-overtime win against No. 21/16 Wake Forest on Saturday.
CLEMSON, SC・11 HOURS AGO
AllClemson

Getting Tyler Davis back paid off for Clemson

Saturday’s performance against No. 21 Wake Forest was not a good one for the Clemson defense.
CLEMSON, SC・5 HOURS AGO
AllClemson

The Clemson offense, led by quarterback DJ Uiagalelei, stepped up in a big way in the double overtime win over Wake Forest, and did so when the defense needed it most.
CLEMSON, SC・14 HOURS AGO

Clemson's Davis Allen "will play in the NFL for 10 years" and is "the best blocking tight end" the Tigers have had, according to DJ Uiagalelei and Brandon Streeter.
CLEMSON, SC・1 DAY AGO
AllClemson

What We Learned from Clemson's Thrilling Win at Wake Forest

Coming out of Clemson's Week 4 win at Wake Forest, where the road through ACC Atlantic runs is clear, how good DJ Uiagalelei is playing is very clear and why the Tigers' defensive backs struggled is crystal clear.
CLEMSON, SC・1 DAY AGO
AllClemson

NC State has covered the spread six of the last 10 times against Clemson, which is favored in Saturday's game at 7:30 p.m.
CLEMSON, SC・1 DAY AGO
AllClemson

During the Tigers' 4-0 start, the rest of the country is now seeing what Dabo Swinney always saw in DJ Uiagalelei, as the quarterback's confidence is at an all-time high and he is playing some of the best football of his college career.
CLEMSON, SC・1 DAY AGO

Clemson defensive tackle Bryan Bresee discusses playing for his sister, why he came back this week and the outpouring of support he and his family have received this week.
CLEMSON, SC・2 DAYS AGO
AllClemson

WINSTON-SALEM, N.C. — It was not pretty. It was not ugly. It was just awful. That’s the best way to describe No. 5 Clemson’s defensive effort in Saturday’s 51-45 double-overtime victory over No. 21 Wake Forest at Truist Field.
CLEMSON, SC・2 DAYS AGO
AllClemson

No. 5 Clemson needed two overtime periods to knock off No. 21 Wake Forest on Saturday.
CLEMSON, SC・2 DAYS AGO
AllClemson

Breaking down the first half of of action between No. 5 Clemson and No. 21 Wake Forest.
CLEMSON, SC・2 DAYS AGO
AllClemson

The Clemson Tigers get a couple of defenders back, in Bryan Bresee and Nate Wiggins, but are still without a few key pieces as they prepare for their contest against Wake Forest.
CLEMSON, SC・2 DAYS AGO
AllClemson

WINSTON-SALEM, N.C.—After a successful two-game homestand, the No. 5/5 Clemson Tigers will hit the road this week when the team travels to face the No. 21/16 Wake Forest Demon Deacons on Saturday, Sept. 24. Kickoff for the early contest at Truist Field is set for noon ET.
CLEMSON, SC・2 DAYS AGO

WINSTON-SALEM, N.C.–The Tigers were without five defenders in Saturday's 51-45 win over Wake Forest, and a number of Tigers—including wide receiver Beaux Collins and running back Will Shipley were banged up in the game.
CLEMSON, SC・2 DAYS AGO
AllClemson

Former Clemson pitcher and Atlanta Braves starter is out for the rest of the regular season.
CLEMSON, SC・2 DAYS AGO