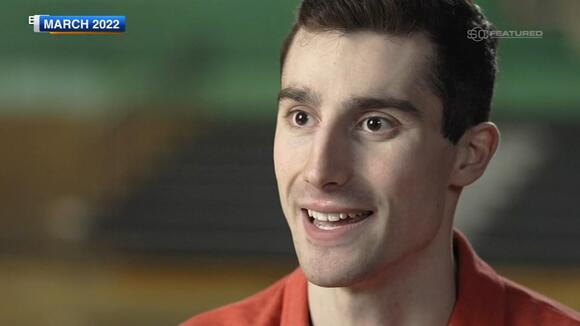 Justin Hardy was a star on and off the court. The 22-year-old college basketball player from St. Charles, Illinois, who passed away last week after a battle with stage 4 stomach cancer, made a profound impact on those who knew him and those who are hearing his story for the first time. His inspiring journey is being remembered by family, friends, coaches and teammates. Hardy began attending Washington University in St. Louis in 2018 and became the University Athletic Association's rookie of the year. In his sophomore year, Washington's season was cut short due to the pandemic; in his junior year, the season was canceled. But he was getting ready to take the court again for his senior year. Then last April, after waking up with pain in his stomach, doctors found a perforated ulcer. They performed surgery. But then they discovered signs of cancer. "The doctor came in. She goes, 'I got the pathology results back. You do in fact have cancer. I'm sorry, this is probably the worst day of your life,'" Hard recalled in a SportsCenter Featured segment that aired in March on ESPN. Hardy was diagnosed with stage 4 stomach cancer. "The initial prognosis that he received was a likelihood of 12 to 18 months after diagnosis for survivorship," Justin's mother Karen Hardy said. "There is no cure for stage 4 stomach cancer right now," Hardy told ESPN. "And I'm being put into this game that I, in theory, I have zero chance of winning." In the SportsCenter Featured segment, titled "Mind Over Matter," Hardy wrote a letter to himself. "Justin, I know you've heard some bad news. News that today is the worst day of your life," he wrote. "Your mind is going to shift to a place you didn't know you were capable of. You will be the most mentally tough person by going through this. There will be plenty more great days to come. Do not let any negativity drag you down. This is all mind over matter." Hardy underwent radiation and chemotherapy treatments to battle the cancer. He went from 215 pounds to 165 pounds. "He looked like a shell of himself. He couldn't move. He was weak. His voice was weak. It wasn't the same Justin," Washington University guard Charlie Jacob said. His coach, Pat Juckem, who described Justin as a basketball machine said, "We're our best version of ourselves when he's with us." But the coach didn't think there was a basketball future for Hardy anymore. The college senior, though, thought otherwise. By October 2021, he was practicing with the team. A month later, he was in the starting lineup. In December, Hardy was dunking once again. Jacob said he just smiled because he knew what he was witnessing with his teammate probably never happened before and would never happen again. On February 1, 2022, Hardy was told the cancer spread to the lining of his colon. Five days later, he tied a career-high of 28 points. "If I was going to do this, I was going to do this," Hardy said. "This is beating it. This is me living my life regardless of the circumstances. If this isn't beating it, I don't know what is." The cancer, though, continued to spread and Hardy's condition worsened. He was unable to eat solid food and his weight and strength plummeted. Hardy's sister, Jackie, called him to ask him a question: "Is this..." Hardy finished the question for her, "Is this the beginning of the end?" He answered, "Yes." "I can't control the spread of the cancer inside of me. That portion, it's going to do what it does. And it might be further away than I think it is, but it's definitely closer than I want it to be," Hardy said. In mid-February, Hardy began an aggressive, experimental treatment protocol. But it was stopped when the side effects ravaged his body and caused him to be hospitalized. He missed three consecutive games. And when Washington University's senior day came on Feb. 26, Hardy couldn't walk onto the court for the pre-game celebrations without pain due to swelling from his hips to his ankles. Hardy's sister had asked him before that day's game if he was thinking of playing. She said he responded, "'I'm going to put on a jersey, but I'm not going to play. I don't want the pity, sympathy play.'" With 37 seconds remaining in the game against the University of Chicago, and with Washington well in control, Hardy checked in. Hardy, so weak he could barely shoot, got a standing ovation from the 500 fans in attendance. Moments later, he made a basket. It would be the final shot of Justin Hardy's Washington University career. Washington would go on to play two rounds in the Division III NCAA Tournament. Hardy was unable to dress for either game. "It did feel like a closing of a chapter," Jackie said. Hardy's impact was felt by those who knew him well before he stepped foot onto a college court. He made an impression right away on Patrick Woods, the head basketball coach at St. Charles East High School. "I'd see him steal the ball and go away for a breakaway dunk," Woods told our sister station WLS-TV Chicago. "As a freshman, you don't see that too often." Woods said Hardy was versatile. He could dunk or nail a three-pointer, like he did a few years ago to win the game against St. Charles North. The shot went viral.

Justin Hardy hit a game-winning 3-point shot for St. Charles East back in 2018 that went viral on Twitter.

Hardy was also a leader off of the court, Woods said, calling him a "phenomenal student" who graduated high school as a straight-A student with honors. He won an award for courage during Final Four weekend and returned to St. Charles East for a special basketball game in his honor. But on Sunday, May 29, 2022, his family broke the news that Hardy died at the age of 22. His father tweeted, "After 13 months of courageously redefining what it means to live with cancer, Justin passed peacefully early this morning." Woods said that while the loss is heartbreaking, he's finding comfort in stories from other teachers about Hardy's compassion. "I'd have a student in class that some kids might be making fun of or picking on and not want to sit next to, and sure enough, he pulled the chair up right next to that student and became friends with them and sat with them the rest of the semester," Woods said. A legacy celebration will take place in Hardy's honor on Friday in the gym at St Charles East. Organizers say it was one of Hardy's wishes that those who attend wear their favorite team's jersey. Washington University sent out its condolences to Hardy's family. "Justin's love for the game of basketball, competition and his teammates made him truly special. We were fortunate to be brought along on his journey," the university said. "Justin taught us many lessons including how to deal with adversity and what winning really means." In the SportsCenter Featured segment, Hardy told ESPN's Gene Wojciechowski that he continued to play because it's what he loved. "You can't give up on the things you love doing because you hit a little adversity," Hardy said. "And that's how I'm going to live the rest of my life." He continued his letter to himself, writing, "You write your story. From opening cover to the very last page. This disease cannot take that away from you. Go out there and defy the odds. Rewrite how to live with cancer. "You are going to do some incredible things."

ESPN’s Malika Andrews stirred up more controversy for the NBA’s Boston Celtics when she brought up the history of the team’s interim head coach from more than 13 years ago. During an on-air NBA Today broadcast last week, the sports world was upended when it was reported...
BOSTON, MA・18 HOURS AGO
AOL Corp

Texts reportedly show Brett Favre was told by Mississippi Gov. that push for volleyball arena could be illegal

Even more text messages concerning Brett Favre's push for a Southern Miss volleyball arena have come to light. Once again, they do not reflect well on the former Green Bay Packers quarterback. A recent court filing has revealed texts showing Favre continue to press Mississippi state officials for funding, even...
MISSISSIPPI STATE・2 DAYS AGO