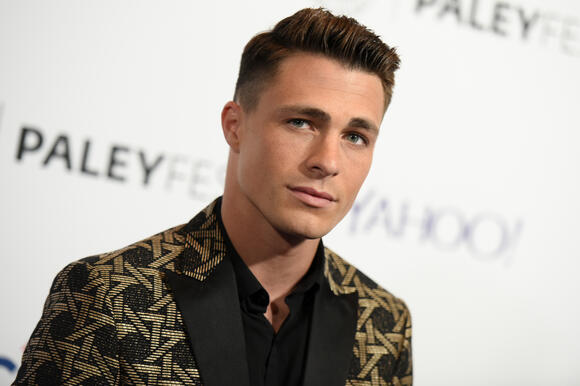 Colton Haynes almost lost out on his “Teen Wolf” role.

The 33-year-old revealed that he was almost not cast in the MTV adaptation because a network executive did not like that he had participated in a photo shoot for gay magazine, XY.

Haynes — who is openly gay — wrote in his newly released memoir, “Miss Memory Lane,” that he was told to conceal his sexuality as it would hinder his ability to get acting jobs.

“It didn’t matter who was on my team, the message I got was always the same: ‘You will not work if you are yourself,’ ” wrote Haynes.

Haynes recalled one instance after auditioning for “Teen Wolf” — which ran from 2011 to 2017 — of his manager telling him that show-runner Jeff Davis had to fight for him to be on the series.

“The head of MTV almost didn’t hire you because of that XY photo shoot we’ve been working our asses off to extinguish. Thank God Jeff fought for you to get that role,” Haynes said his manager told him.

MTV did not immediately respond to The Post’s request for comment.

According to the actor, he had done the photo shoot with his then-boyfriend Jay and spent “years sending cease-and-desist letters to everyone who posted my XY shoot.”

“Jeff was the creator of ‘Teen Wolf,’ and he had indeed fought for me; I was grateful to him, and eager not to f – -k up the opportunity,” Haynes wrote in his memoir, which was released Tuesday.

Last year, Haynes posted the XY with a heartfelt message about staying true to oneself.

“I’ve never posted this picture before,” he wrote. “In fact, I spent a big part of my career trying to erase it from the internet while I was still in the closet. Partly because so many ppl in Hollywood told me I would never work as an openly gay actor, but part of it was because I was incredibly ashamed.”

He continued: “It made me sad to see these pictures I had taken as a teenage model…before I was placed with voice & movement coaches to straighten me up for the cameras…before I learned to see my queerness as a liability. I was jealous of him. The boy in these pictures was so open, so free. He had to be taught that it wasn’t ok to be who he was.”

He also included a message to fans in honor of Pride month.

“Being gay is worth celebrating. I wish I’d figured that out sooner, but I’m so glad I know it now,” he said.

However, Haynes revealed that he attempted to hide his sexuality by wearing varsity-style clothing “to help butch myself up a bit.”

In 2016, Haynes fully embraced his sexuality during an interview with Entertainment Weekly after leaving the show due to unequal pay.

“I needed to suppress my affect, to make my personality match the way I looked — like a stupid, dumb jock — with just enough silly charm that people would still like me,” Haynes stated.

NeNe Leakes set the record straight — no pun intended — after her son Brentt seemingly came out as gay. “Brentt is not gay,” the “Real Housewives of Atlanta” alum said during a “Breakfast Club” interview Monday. “Not to my knowledge.” Leakes, 55, shared that she spoke with the 23-year-old on the phone after receiving calls from friends who were “concerned” about his TikTok video on Saturday. “He called me up and was like, ‘Mom, everybody is asking if I’m gay because I did this TikTok thing,'” she explained. “And I said, ‘It’s OK if you are gay. It’s fine with me.’ “And he...
1 DAY AGO
Herbie J Pilato

He was one of the most popular teen idols in the history of entertainment. As the star of the 1970s hit TV series, The Partridge Family, he rocketed to fame and then died too young.
2 DAYS AGO
Distractify

“King of Pop” Michael Jackson’s family has been all over the news lately. The late pop star’s ex-wife Lisa Marie Presley passed away on Jan. 12. His daughter, Paris Jackson, attended the Los Angeles premiere of the documentary Pamela, a love story on Monday, Jan. 30. And that same day, Michael’s son Prince Jackson congratulated cousin Jaafar Jackson on his role as the “Thriller” singer in the upcoming biopic Michael. But what about Michael’s other son? Where is Blanket Jackson now?
LOS ANGELES, CA・17 HOURS AGO
HollywoodLife

Cindy Williams was a successful actress known for her work on Laverne & Shirley. She was only married once, to Bill Hudson. Bill is notably also the ex-husband to actress Goldie Hawn. On Jan. 30, 2023, news broke that Cindy had died just five days prior at the age of...
1 DAY AGO
HollywoodLife

Leah Remini wasn’t at Jennifer Lopez‘s wedding to Ben Affleck last summer, which was shocking since Leah, 52, and J.Lo, 53, have been close friends for a very long time. But a recent wedding that Leah did make it to was J.Lo’s ex-husband, Marc Anthony, 54, and Nadia Ferreira‘s lavish nuptials in Miami on January 28. Leah, who has known Marc for a long, long time as well, showed off her glamorous look for the “I Need To Know” hitmaker’s special day on Instagram.
MIAMI, FL・1 DAY AGO
msn.com

Slide 1 of 22: Savannah Chrisley has spoken on her podcast about her parents, Todd and Julie Chrisley, and their recent incarceration on January 17th. She said: "Last week was an extremely difficult week for my family as a whole," as her parents have now spent almost two weeks in prison.
21 HOURS AGO
New York Post

Jeffree Star claims he exposed “insecure” NFL wives — referring specifically to Saryn Anderson, wife of Carolina Panthers defensive end Henry Anderson — as fans continue to try to identify his mystery “NFL boo.” Saryn allegedly messaged Star on Instagram, asking the 37-year-old makeup guru Tuesday to stop sharing cryptic pictures and clues about his new football-playing boyfriend because people apparently think it’s her husband. Carl Nassib of the Tampa Bay Buccaneers is the only openly gay player in the NFL, but he recently went public with his boyfriend, Danish Olympic swimmer Søren Dahl. Fans may be hypothesizing that Henry is the man standing with his back turned to...
11 HOURS AGO
New York Post

Bad Seeds frontman Nick Cave said he’s lost his “rage, anger, and hatred” after the death of his two sons. The rocker, 65, suffered an unimaginable loss when two of his children died in 2015 and 2022, respectively. Responding to a fan’s note in his Red Hand Files newsletter, the “Where the Wild Roses Grow” hitmaker said everything was flipped upside down after he got the devastating news. The fan’s message read: “When did you become a Hallmark card hippie? Joy, love, peace. Puke! Where’s the rage, anger, hatred? Reading these lately is like listening to an old preacher drone on and on at Sunday mass.” Cave’s...
22 HOURS AGO
New York Post

James Gunn is dishing on all the upcoming plans for the DC Universe.  Gunn, 56, and Peter Safran, 57, officially started running the newly created DC Studios within Warner Bros. Discovery three months ago, and now the co-CEOS have announced the first titles to come out of the studio. Gunn explained that the titles will exist in one universe and one story, and if something is outside of that story — such as Matt Reeves’ “The Batman,” Todd Phillips’ “Joker” or “Teen Titans Go!” — then it would be explicitly labeled as DC Elseworlds. “As many of you know, DC has been disconnected...
VERMONT STATE・13 HOURS AGO
New York Post

‘This is 13 years of raising kids’: Mom makes shocking discovery inside couch

TikToker Kacie is a busy mum juggling four kids and running her own business, so the shocking discovery she made inside her sofa recently… kind of makes sense. As her family was rummaging around searching for the TV remote, they looked in all the usual spots including in between the cushions of the couch.  After no luck, they somehow landed on the conclusion that it must have fallen down the back of the couch.  And in a bizarre move – which we still don’t really understand – they decided to cut open the back of the sofa in order to look for the remote.  It begs the question...
19 HOURS AGO
New York Post

“Dr. Phil” is coming to an end this spring after 21 seasons, CBS Media Ventures announced Tuesday, emphasizing it was Dr. Phil McGraw’s decision to stop making new episodes. The media company aims to repackage and rerun old episodes of the daytime show for the 2023-2024 season and beyond. The repurposed episodes would feature new content such as “wrap-arounds and intros by McGraw,” 72, as well as “guest updates,” per the announcement. “I have been blessed with over 25 wonderful years in daytime television,” McGraw said in a statement. “With this show, we have helped thousands of guests and millions of viewers...
7 HOURS AGO