Who's Next at Clemson? An Early Look at Candidates to Replace Monte Lee 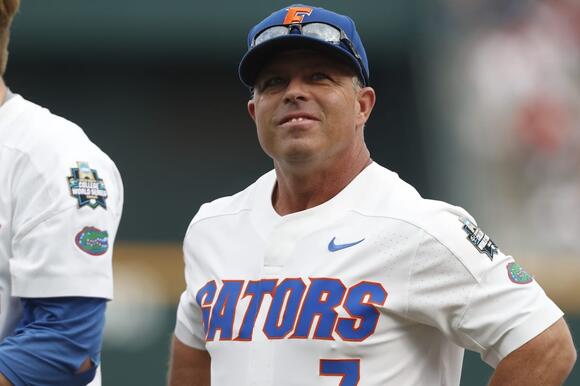 Clemson AD Graham Neff wants to "invest big" in a new head coach to get a baseball program back on track that's missed the last two NCAA tournaments. Is the next guy on this list?

The search for a new Clemson baseball coach is fully underway.

Athletic director Graham Neff said after the dismissal of former head coach Monte Lee on Tuesday that the Tigers will "invest big" in a new guy to get a program back on track that has missed the NCAA tournament the last two seasons.

Neff considers Clemson baseball a "top-15 job" nationally , and he'll likely have to put the dollar signs behind that thought to get his man. Neff plans on pursuing a range of candidates, including big-name head coaches, mid-major head coaches, top assistants and even those working in the professional ranks.

With such a wide net cast, it's hard to pinpoint just a few names, but here's a list of candidates compiled by All Clemson who make sense for one reason or another:

The Notre Dame head coach checks a ton of boxes for any program looking for a head coach, but especially for a school in the ACC. Jarrett has been in the league for three seasons. He also worked at Florida State as an assistant and has been linked to a return to Tallahassee one day. He's got recruiting experience in the region working as an assistant coach at East Carolina and Auburn while serving as head coach at UNC Greensboro. Jarrett's gone 80-29 overall with the Irish. He made it to a Super Regional in 2021 and is back in the NCAA tournament again this year as the No. 2 seed in the Statesboro Regional.

The Florida head coach who won the 2017 College World Series made a name for himself as an assistant at Clemson from 1999-2007. He didn't have interest in the job the last time it came open as the Gators were rolling and he didn't want to be the guy to replace mentor Jack Leggett. But maybe the three-time SEC coach of the year would listen this time around? O'Sullivan is one of the highest-paid coaches in college baseball, so could Clemson afford him if O'Sullivan was looking to get out of Gainesville for some reason? It still feels like a long shot that any of that would happen.

Neff said he'd look at the pro baseball level, and here's a name that stands out. LeCroy is currently the manager of Triple-A Rochester Red Wings, a Washington Nationals affiliate. LeCroy is a South Carolina native who was an All-American at Clemson, where he became a great college player from 1995-97. He went on to play eight years in the Major Leagues for the Twins and Nationals. LeCroy has been working as a coach and manager with the Nationals and their farm system for more than a decade. His name gained a lot of traction in the last coaching search and will likely be tossed around Clemson once again.

If you're looking for a rising star to take over the Tigers, look no further than the Liberty head coach, who's got the Flames in the NCAA tournament for the third time since 2019. He's won 78 games the last two seasons and guided Liberty to one of its best baseball campaigns in school history in 2021. This year, he's got the Flames as a No. 3 seed in the Gainesville Regional. Jackson got his coaching start as an assistant at Wofford in 2000 and spent eight seasons on Mike Fox's staff at North Carolina. If this isn't his time to move up, it's still coming soon.

The Campbell head coach has the Camels in the NCAA tournament as the three-seed in the Knoxville Regional. His program has won the Big South the last four times that the conference has crowned a regular-season champion. The 41-year-old coach has been with Campbell since 2015. He's 235-172 overall and might be ready to move up from the mid-major level.

This might be a harder get than you'd think. The Power 5 level might not appeal to a man who's turned East Carolina into an annual NCAA tournament participant. The Pirates have made a regional appearance in six of the last seven tournaments and won 40-plus games five times since 2015. Godwin's led the program to three Super Regionals and has a chance to do it again as ECU earned a top-8 seed in this year's NCAA tournament.

The Michigan head coach got his start in the business as a Clemson volunteer assistant under Leggett in 2002. Those ties to the Tigers made him an early candidate in 2015 when Lee was hired. Bakich worked under Tim Corbin, a former Leggett assistant, at Vanderbilt before landing his first head coaching gig at Maryland, where he went 70-98 in three seasons. He's been with the Wolverines since 2013, guiding Michigan to a 324-213 record and a College World Series runner-up finish in 2019. He should again be a legit candidate to return to Clemson.

How ironic would it be if the man who beat Lee in the former Clemson coach's last game ends up being the guy to replace him? The Virginia Tech head coach greatly upped his profile since turning the Hokies one of the top teams in the nation this year. A top-8 seed in the NCAAs, Szefc might like what he's built at VT and feel like it's too much of a lateral move to stay in the conference, but he did interview for the Clemson job in 2015 when he was at Maryland. He brings a ton of experience to the table. Szefc is 514-357-3 overall in 17 seasons as a head coach, including 126-102 at Virginia Tech since 2018.

The long-time assistant and pitching coach is looking for a job after Steve Rodriguez resigned as Baylor head coach earlier this week. Strauss has worked in college baseball for 20 years, including stops at San Jose State, Long Beach State and Pepperdine before spending seven years in Waco, Texas. While he's worked primarily on the West Coast, his name has come up early in the search.

Clemson head coach Dabo Swinney not only defended the Tigers' nonconference schedule but also went on record in calling the ACC Atlantic one of the toughest divisions in the country.
CLEMSON, SC・1 DAY AGO
AllClemson

Saturday's game between 4-0 Clemson and 4-0 NC State will represent the sixth all-time matchup of undefeated teams at Death Valley four or more games into a season.
CLEMSON, SC・1 HOUR AGO
AllClemson

Though Shipley Plays for Clemson, Most of His Family will Wear Red Saturday

This week has a little different feel for Will Shipley than it does his Clemson teammates.
CLEMSON, SC・1 DAY AGO
AllClemson

With NC State Up Next, Uiagalelei and Clemson Offense Getting Swagger Back At Right Time

Clemson's offense, led by DJ Uiagalelei, is hitting its stride at an opportune time seeing as the Tigers face one of its stiffest challenges to date this weekend, as NC State brings its veteran-laden defense to Death Valley.
CLEMSON, SC・2 DAYS AGO

The Atlantic Coast Conference announced Monday that offensive tackle Jordan McFadden (Co-Offensive Lineman of the Week) and quarterback DJ Uiagalelei (Quarterback of the Week) have earned ACC Player of the Week honors for their performances in Clemson’s thrilling 51-45 double-overtime win against No. 21/16 Wake Forest on Saturday.
CLEMSON, SC・2 DAYS AGO
AllClemson

Getting Tyler Davis back paid off for Clemson

Saturday’s performance against No. 21 Wake Forest was not a good one for the Clemson defense.
CLEMSON, SC・2 DAYS AGO
AllClemson

The Clemson offense, led by quarterback DJ Uiagalelei, stepped up in a big way in the double overtime win over Wake Forest, and did so when the defense needed it most.
CLEMSON, SC・2 DAYS AGO
AllClemson

CLEMSON, S.C. — Wes Goodwin is not going to put a grade on how his defensive line has played so far this year, but Clemson’s defensive coordinator believes there are some things they can do better. Heading into the 2022 season, the Tigers’ defensive front was being compared to the likes of the 2014 ...
CLEMSON, SC・2 DAYS AGO