InsideTheHeat is a FanNation channel covering the Miami Heat

Miami Heat's Udonis Haslem Assesses The Season And His Future 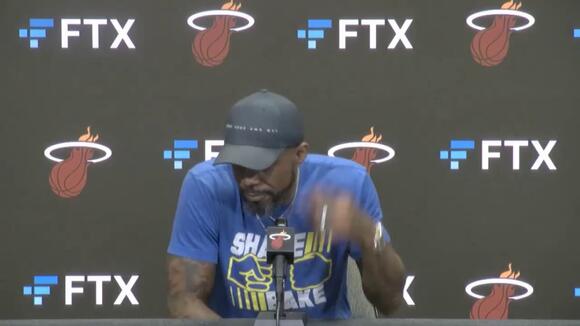 Haslem breaks down the Heat's season during exit interviews

Although his numbers won't stand out, Udonis Haslem has always been the heart of the Miami Heat’s franchise.

On Tuesday, he said he will “take my time” this offseason to decide if he will continue his playing career next season. He added he plans to take a “mental break” and then figure it out.

With Bam Adebayo continuing to show improvement and threatening to replace him as the Heat’s career rebounding leader, Haslem stated that Adebayo proved “he’s capable” and “he showed that he’s capable of doing it on a big stage and in big time moments.”

Haslem also pointed out guard Tyler Herro's struggles were a product of the Boston Celtics' defense in the Eastern Conference finals. Herro shot just 37 percent in the series.

“He was prepared for that but unfortunately he had his injury.” Haslem said “[Herro] can help us win basketball games in more ways than scoring the basketball.”

One of the highlights of the series was what Draymond Green said about choosing the Celtics over the Heat. In response to that, Haslem wanted to thank Green for the motivation.

Haslem said “it wasn’t personal" but he will always “speak out for my guys.”

Haslem, a three-time NBA champion, also spoke on the disappointment of losing to the Celtics.

“For me, watching those guys be so close and not being able to get over the hump," he said. "It’s hurtful because I want them to feel what it’s like to be a champion.”

With a few players eligible for free agency and rumors circulating of star players joining the Heat, Haslem spoke on the anticipation of roster changes.

“I don’t know how that’s going to work," Haslem said. "That’s not my space. My space is to make sure we get the most and maximize the potential of the guys who do come in here. That’s where I stand at and I’m pretty good at that. ... We’ve been to two of the last three Eastern Conference finals and we’ve been doing well, all things considered.”

For a look at some of the latest Heat apparel. CLICK HERE

Cory Nelson is a contributor to Inside The Heat. He attended Northern Virginia Community College. He can be reached at corymckenzienelson@hotmail.com or follow him on Twitter @CKenzyNelson

Herro’s new deal may see him in a bigger position next season.
MIAMI, FL・1 DAY AGO
InsideTheHeat

Adebayo finished with 22 points in the Heat's preseason opener against the Minnesota Timberwolves
MIAMI, FL・15 HOURS AGO
InsideTheHeat

InsideTheHeat is a FanNation channel covering the Miami Heat