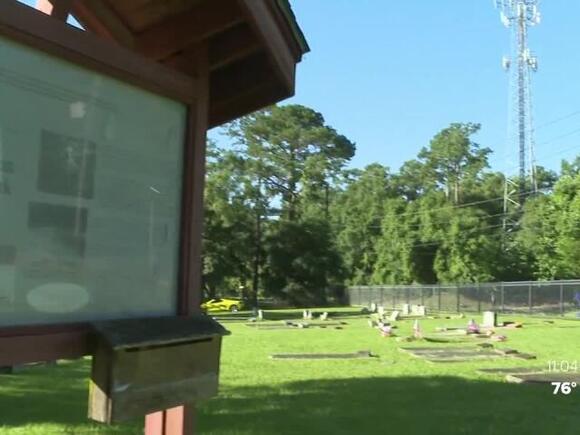 It's been five years since Rep. Al Lawson first gathered a group to refresh the flags at Greenwood in what's now a tradition deeply rooted in community.

"Every year it's grown and grown," said Lawson. "When we first started out five years ago, it was only very few of us, and it was very difficult to do the cemetery with over 300 and something veterans that was here."

This Memorial day, upwards of 50 community members and leaders volunteered, along with the Buffalo Soldiers, who've attended all five years.Frank Williams is one of those soldiers and shares why remembering the fallen is part of their mission.

"They gave something that no one can ever get back, and that's their time to serve our country for the protection of America for it to be the country that it is today," Williams explains. "It's a privilege to come out and honor them."

But Williams remembers something more. He was part of a vast community effort in 1986 to revive Greenwood Cemetery after what's noted on the City of Tallahassee website as "neglect and deterioration."

For many years, Greenwood was the only place black people could be buried. Williams credits former Mayor Dot Inman-Johnson with leading the charge of restoration.

"The cemetery was in such a deplorable condition it didn't even look like a cemetery," Inman-Johnson said. "The roots of oak trees and other trees had grown over a lot of the grave sites."

At that time the city didn't want to take on the upkeep, but, "What I did was call on the citizens of Tallahassee to form a city wide committee of volunteers to work, and ask construction companies to donate equipment," Inman-Johnson said.

They started working each Saturday during the fall of that year, and then, "By the spring of the year we had the cemetery up to a standard that we felt the city should be happy to come in and take over," said Inman-Johnson.

That restoration paved the way for the Memorial Day tradition we see today, now five years strong, with no signs of stopping.

"And so the city has done a good job of keeping it up and so we look forward to continuing to work on it and eventually clean all the headstones and everything that we have out here," Lawson says.

Rep. Lawson has organized the event and he says he's proud to see continued and growing community participation.

One Tallahassee tattoo shop will be spending a day creating memories of Captain Brenden Rudy that will last a lifetime with a special flash tattoo event.
TALLAHASSEE, FL・6 HOURS AGO
WTXL ABC 27 News

People who evacuated the storm are trying to make the most out of their time in the Capital City. They're spending their time sight-seeing and trying local restaurants.
TALLAHASSEE, FL・14 HOURS AGO

Jefferson County will have school this week

After previously announcing closures, Jefferson County Schools K-12 has announced that schools will NOT be closing this week.
JEFFERSON COUNTY, FL・2 DAYS AGO
WTXL ABC 27 News

Congratulations to Joe Bullard who is a 2022 National Black Radio Hall of Fame inductee. Bullard’s iconic voice has been a staple on Tallahassee radio stations for over 30 years.
SAINT LOUIS, MO・2 DAYS AGO
WTXL ABC 27 News

Sandbag locations across the Big Bend

The city of Tallahassee and the Leon County government announced Sunday morning that they will provide sandbag locations.
TALLAHASSEE, FL・5 DAYS AGO
WTXL ABC 27 News

Florida A&M University has canceled classes from Sept. 27 through Sept. 30 at the Tallahassee campus.
TALLAHASSEE, FL・4 DAYS AGO

Every football team has that guy, a guy that can be trusted to get the job done. For Aucilla Christian, that guy is Jace Grant..
MONTICELLO, FL・2 DAYS AGO
WTXL ABC 27 News

Increased traffic at pumps and stores: State of Florida prepares for Ian

According to the Florida Department of Transportation, at least 32 traffic crashes have happened in the Kate-Sullivan Elementary and Cobb Middle School area since 2012.
TALLAHASSEE, FL・4 DAYS AGO
WTXL ABC 27 News

As people in Taylor County prepare for the possible effects of Hurricane Ian, many in the coastal community are taking their boats out of marinas and "not taking any chances" on this storm.
TAYLOR COUNTY, FL・3 DAYS AGO
WTXL ABC 27 News

Florida State University has announced classes are canceled for Tuesday, September 27, through Friday, September 30, due to Hurricane Ian.
TALLAHASSEE, FL・4 DAYS AGO