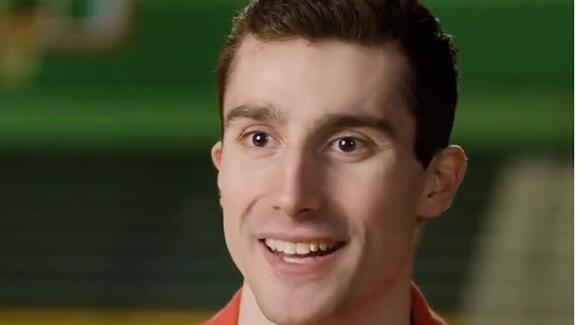 “After 13 months of courageously redefining what it means to live with cancer, Justin passed peacefully early this morning,” his father, Bob Hardy, wrote on Twitter.

Hardy’s coach, Pat Juckem, said in a statement: “We have the awesome responsibility to carry forward his legacy of relentless positivity. To respond to even the toughest of circumstances with the strength and courage that Justin did. In his own words: ‘If you want to win, just give me the ball.’”

After surgery for a perforated ulcer, Hardy received a devastating diagnosis in April 2021: He had stomach cancer and it was terminal.

Despite drastic weight loss as he underwent treatment, Hardy returned to the court for the St. Louis, Missouri, school, playing in 21 games while averaging 11.1 points per game . He had the second-highest scoring average on a team that eventually made it to the second round of the Division III NCAA Tournament.

The senior, who graduated early with a double major , was featured on ESPN multiple times.

“This is me living my life regardless of the circumstances,” Hardy told the network in February. “If this isn’t beating it, I don’t know what is.”

So sad. To all the NBA jerks, not to mention jerks in general, that thinks the world owes you something, this kid should be remembered as a role model and a brave young man! Prayers to the family and friends.🙏

RIP Justin, you are a hero and were a great example of how each of us can make the world a better place with your type of positivity, strength, and courage!

This man kept playing basketball while cancer was killing him slowing, what a strong young man he was RIP Justin my condolences to his family true warrior in my book

James joins an ownership group in a sport described as a combination of badminton, tennis and ping-pong.
LOS ANGELES, CA・13 HOURS AGO
All Cardinals

Ethan King and his father join HuffPost Live to talk about Ethan’s aim to better the world by providing those less fortunate with athletic equipment.
SOCCER・14 HOURS AGO