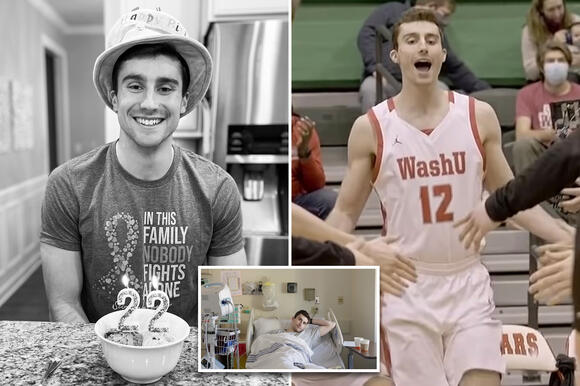 Justin Hardy, who inspirationally played college basketball while battling stomach cancer, died Sunday at the age of 22, his family announced on social media.

“After 13 months of courageously redefining what it means to live with cancer, Justin passed peacefully early this morning, Sunday, May 29,” Bob Hardy, Justin’s father, wrote on Twitter .

Hardy played at Washington University in St. Louis, an NCAA Division III institution, and worked toward a double-major in accounting and finance while undergoing treatments for Stage 4 cancer. Hardy’s story went viral after he was spotlighted on ESPN’s College GameDay.

“This is me living my life regardless of the circumstances,” Hardy said at the time. “If this isn’t beating it, I don’t know what is.”

Given an initial prognosis of 12-18 months after diagnosis, Hardy averaged 11.1 points in 23 minutes per game over 21 games last season. His final on-court appearance was on Feb. 26.

“In place of flowers, we encourage donations to the #HardyStrong GoFundMe,” Bob Hardy wrote. “The funds will be used for medical & memorial expenses, with the majority put towards the HardyStrong Scholarship – a fund for high school graduates competing athletically in college who share Justin’s grit, determination, and all-around excellence.”

“Our deepest condolences go out to Justin Hardy’s family on his passing. We are devastated by this loss but comforted by the manner in which he lived his life.

“Justin taught us many lessons including how to deal with adversity and what winning really means. We have the awesome responsibility to carry forward his legacy of relentless positivity. To respond to even the toughest of circumstances with the strength and courage that Justin did. In his own words: ‘If you want to win, just give me the ball.'”

ESPN college basketball analyst Dick Vitale, who was diagnosed with cancer in 2021, built a relationship with Hardy.

“I had been texting the last month with Justin & he wanted so badly to be at our [Jimmy V Foundation] Gala but unfortunately it was impossible for him to make the trip,” Vitale wrote on Facebook, mentioning that Hardy’s coach stood in for him as he was honored for his courage. “Our prayers go out to Justin’s Mom & Dad.”

Jets’ offense will be ‘a hair different’ with Wilson back

FLORHAM PARK, N.J. — Changes are coming to the New York Jets’ offense. Nothing too drastic or radical but Zach Wilson’s return as the starting quarterback allows the team to do some things it simply couldn’t with 37-year-old Joe Flacco under center. Offensive coordinator Mike LaFleur...
NFL・19 MINUTES AGO
HuskyMaven

Listen to a Podcast That Brings UCLA and UW Experts Together

Will Decker of the Bruins Bible and Dan Raley of Inside the Huskies size up Friday's game at the Rose Bowl.
LOS ANGELES, CA・32 MINUTES AGO
News 5 Cleveland WEWS

With defensive ends Myles Garrett and Jadeveon Clowney uncertain for Sunday's game against the Atlanta Falcons, it leaves a window of opportunity for rookie Alex Wright to step up to the line.
CLEVELAND, OH・34 MINUTES AGO
Fox News