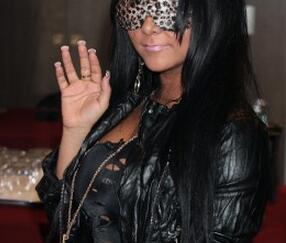 Snooki is back on the Boulevard.

The third Snooki Shop, which sells clothing, makeup and memorabilia, will open at 11 a.m. Monday, May 30, at 604 Blvd. in Seaside Heights, according to Snooki Shop and Nicole “Snooki” Polizzi's social media.

The star of “Jersey Shore” and its sequel, “Jersey Shore Family Vacation,” also shared a video of her kids outside the famous Shore House in Seaside Heights, where the series was filmed from 2009 to 2012.

She also shared a video of her returning to her vehicle in Seaside Heights.

“Of course I got a ticket,” Polizzi said. “Gotta love Seaside.”

The interior of the new Snooki Shop, according to Polizzi's social media, references one of Polizzi's most notorious exploits with a neon sign that states: “Where's the beach?” That's what she asked people on the Seaside Heights boardwalk when she was arrested for disorderly conduct there on July 30, 2010.

Beach-goers complained that Snooki, who appeared to have had a few too many, was bothering them. She had to pay a $500 fine and complete two days of community service, which included signing autographs at the borough community center. The incident, shown on Season 3 of “Jersey Shore,” cemented the crew's bad boy — and bad girl — reputation.

Many of the show’s landmarks in the borough, including the “Jersey Shore” house, the Shore Store, where the last cast worked, and Spicy Cantina are popular with fans. However, the Karma nightclub and the Bamboo Bar, both frequently shown on the show, are closed and demolished, respectively. They were both located on the Boulevard.

The borough is welcoming Polizzi back. She's now a married mom of three with homes in Toms River and Florham Park.

“The mayor and borough council welcome Nicole and her fashion boutique store to the Seaside Heights business community,” said Seaside Heights Borough Administrator Christopher Vaz via email previously to the USA Today Network NJ. “As elected leaders and local business owners jointly continue the hard work of redeveloping the Boulevard and transforming Seaside Heights, we are pleased to have Nicole onboard for the journey. Messy Mawma is actually a smart young businesswoman with a great vision for her brand!”

Alyssa Milano: I wasn't in blackface, I was Nicole 'Snooki' Polizzi from Jersey Shore

Polizzi operates two other Snooki Shops, one in Madison and the other in Beacon, N.Y.

“We're happy she's going to come here,” said Jose Rivera of Little Mia's Pizza, also on the Boulevard. “We'll cook dinner for her. I'll have a special for her this summer.”

Polizzi is not the only “Jersey Shore” cast member to open a clothing store in the state.  Jenni “JWoww” Farley opened Heavenly Flower, a maternity apparel store, in the American Dream complex in East Rutherford in 2021, and former cast member Sammy “Sweetheart” Giancola opened Sweetheart Coast, a clothing/boutique store, on the boardwalk in Ocean City last summer.

Polizzi did not state if she'll be attending the opening on Monday, and attempts to reach a store representative for further comment were unsuccessful. An employee at the Madison store stated that she did not know if she will be attending.

Subscribe to app.com for the latest on the New Jersey celebs.