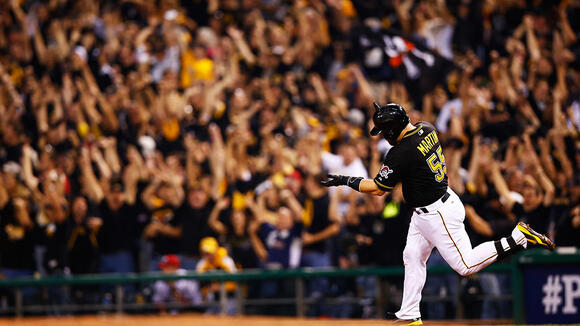 PITTSBURGH (KDKA) - It was a sea of black at PNC Park on a crisp October night in 2013 when 38,000 fans with one voice chanted at the Reds' pitcher.

From there, the then Cincinnati pitcher was about to head into his stretch when the ball came tumbling out of his glove and he officially had nowhere to hide.

At the plate stood Pirates' catcher Russell Martin, facing a 2-1 count in the bottom of the second inning of the National League Wild Card Game with his team up 1-0.

As the capacity crowd on the North Shore continued their sing-song chant of Johnny Cueto's last name, he set and offered up a pitch right down the middle.

Martin made no mistake.

He launched a solo home run into the left-center field bleachers at PNC Park and the Pirates suddenly were in complete control.

From there the Pirates would go on to head to their first postseason appearance since 1992.

For two seasons, Russell Martin framed pitches behind the plate for the Pirates, and for those two seasons, he was an impact player.

Martin stepped away from baseball in 2019 and on his Instagram page on Saturday, officially announced his retirement.

Along with the Pirates, Martin also spent time with the Dodgers, Yankees, and Blue Jays.

The hard part is finished. Now the Rays hit the playoffs with nothing to lose

And so, they celebrated. Happily and respectfully. Joyfully and modestly. Mostly, however, the Rays celebrated … deservedly. Tampa Bay’s postseason-clinching 7-3 victory in Houston Friday night was the culmination of what is probably the most underwhelming playoff run in franchise history, but that’s only because of the many obstacles the Rays had to circumvent to get here.
SAINT PETERSBURG, FL・21 MINUTES AGO
The Associated Press

ATLANTA (AP) — Austin Riley doesn’t want to put too much emphasis on winning the first game of a crucial three-game series with the New York Mets. That being said, he sure is glad the Atlanta Braves took the opener. “To get the first one is huge and just try to build as much momentum off it as possible,” Riley said. “To come out fighting and top to bottom did a great job. Arms did great. Just a solid win.” Riley and Matt Olson hit back-to-back homers off Jacob deGrom in the second inning and Dansby Swanson later connected off the Mets ace as the Braves beat New York 5-2 Friday night to move into a tie for the NL East lead.
QUEENS, NY・43 MINUTES AGO
CBS Pittsburgh

Remembering Roberto: Home plate memorial honoring his 3,000th hit to be placed in the North Shore

PITTSBURGH (KDKA) - Fifty years ago today, the amazing Roberto Clemente notched his 3,000th hit. In celebration of the day, team officials, fans, and a special former Pittsburgh Pirate all gathered on the North Shore. A memorial will soon be placed in the exact spot on the North Shore where Clemente cemented his legacy as one of the greatest baseball players ever. Three Rivers Stadium's rock-hard astroturf is long gone, the fine dirt of the basepaths now replaced by blacktop but thanks to Len Martin and the efforts of others, the location of home plate is now known - the place where the...
PITTSBURGH, PA・6 HOURS AGO
CBS Pittsburgh

FLORHAM PARK, N.J. (AP) — Zach Wilson was back under center for the New York Jets, taking snaps and preparing to start for the first time this season."It's the happiest I've been in a month," the second-year quarterback said with a big smile Wednesday.Coach Robert Saleh announced Wilson will make his season debut at Pittsburgh on Sunday "if all goes well this week" at practice, six weeks after having knee surgery."Absolutely, yeah," Saleh said.Wilson had been ramping up workouts in recent weeks, but Saleh said Monday the Jets were waiting for the quarterback's doctors to clear him before making a...
NFL・2 DAYS AGO

(AP) — Hines Ward sees some Pittsburgh in San Antonio.Ward, who played his entire 14-year career with the Steelers and was MVP of their Super Bowl win over Seattle in 2006, is getting his first opportunity to be a head coach with San Antonio in the new XFL. The league relaunches in February 2023."It's definitely been a humbling experience for me," Ward said on the AP Pro Football Podcast. "I see a lot of similarity in the city of San Antonio as I do with Pittsburgh — passionate fan base, small market, as far as not being a big city....
SAN ANTONIO, TX・7 HOURS AGO