William Gholston Opens up About the Bucs Offseason and More 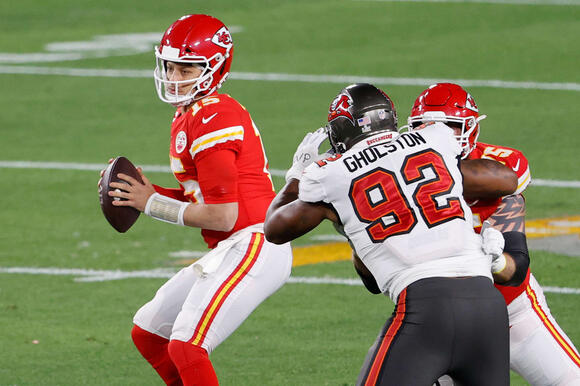 Although he isn't the player with a giant poster of his face on the side of Raymond James Stadium. Or the player who graces the cover of the Bucs program on game days. William Gholston is still an incredibly important figure within the Tampa Bay Buccaneers organization.

He's big. He's strong. He's consistent on the field. He's a leader in the locker room. And he's perennially underrated. Each of these factors surely contributed to Jason Licht and the Buccaneers' front office prioritizing him as a player they wanted to bring back for another run at the Lombardi Trophy.

So that's just what they did.

Although William Gholston is rarely the center of attention... when he speaks, you ought to listen. Especially if the topic of discussion has anything to do with the Tampa Bay Buccaneers. After all, he's entering his 10th year as a member of the Bucs--further solidifying his status as the longest-tenured player on the team.

On a recent episode of the Pewter Report Podcast , William Gholston offered some behind the scenes insight on a number of different Bucs players and topics.

The interview was conducted by Scott Reynolds and Matt Matera , both of whom did an excellent job getting Gholston to really open up about certain topics.

When asked about his impressions of the Buccaneers' second round draft pick, and his newest teammate along the defensive line, Logan Hall, Gholston wasn't shy in complimenting the youngster based on what he's seen from him so far at OTA's.

"His versatility. His explosiveness. And like, how well he moves to be that big. I was shocked because I don't necessarily see guys my size and stature all the time. And he's the same size as me, but he moves like Noah Spence...He is like a little fish out there. And he's retaining the information as well. I've got really high hopes for this guy. I know he's going to be able to produce."

He also discussed the team's bitter playoff exit in the NFC Divisional Playoff game vs. the Los Angeles Rams. When asked how long it took him to get over the loss, Gholston responded with great candor.

"I don't know, I'm not really over it. Usually 24-hour rule, but that stuff sucks bro. I think everybody felt what I felt like. Come back, fight our butts off. The last two plays. It was gut wrenching. It was the worst loss I ever had in my life."

Gholston also went on to discuss Vita Vea, including his impressive transition from being a young player in the league, to one of the Bucs' most important leaders in the locker room, and a valuable mentor for younger players.

"To be able to see big V come through and get that big contract. Which he well deserved because he's a dominant force. He's like a generational talent... It's crazy to see how much mental fortitude Vita has. Now I'm in the meeting room and Vita's calling out blocks, calling out situations, I'm listening to him do all this, and I'm like man, we're getting old... I'm excited to see what he can do as that #1 guy."

When asked about which quarterback in the NFL Gholston would most like to get a sack against, he mentioned Tom Brady (while offering the caveat he would obviously prefer to remain his teammate), as well as his former quarterback turned bitter rival, Jameis Winston.

"I look at Jameis like a bro, that's one of the bros, but I want to knock his block off. At the end of the day that's my brother, but I would like to do that."

With the seemingly inevitable departure of Ndamukong Suh on the horizon, with Vita Vea set to take on more responsibility in his fifth season, and with a promising rookie (Logan Hall) expected to play a ton, William Gholston's role along the defensive line is as clearly defined as it's ever been.

He'll be tasked with continuing his stellar defense against the run, he'll be faced with the challenge of improving even more as a pass rusher, where he's hoping to build off a career-high in sacks last season (4.5), and most importantly, he'll be asked to step into an even more prominent role as a leader in the locker room.

If you were to take away anything from this interview, it's that William Gholston is extremely confident in his teammates, and not only is he personally prepared to meet his lofty expectations for this season, but he's motivated to exceed them.

The Buccaneers will need Tom Brady healthy if they hope to stack up some wins in the weeks to come.
TAMPA, FL・2 DAYS AGO
BucsGameday

This could pose a distraction for the Buccaneers.
TAMPA, FL・2 DAYS AGO
BucsGameday

The Buccaneers listed Brady as a non-participant.
TAMPA, FL・1 DAY AGO
BucsGameday

It would be the first game that the second-year player has ever missed in the NFL.
TAMPA, FL・9 HOURS AGO

The Tampa Bay Buccaneers were without their head coach today, as they continued preparations for this week's matchup with the Atlanta Falcons.
TAMPA, FL・1 DAY AGO
BucsGameday

Who Struggled and Who Shined in the Bucs' Week 4 Loss to the Chiefs?

In what was a dominating performance by the Kansas City Chiefs, a number of Bucs players struggled. But there were bright spots too, and there's plenty to build off moving forward.
TAMPA, FL・13 HOURS AGO
BucsGameday

After just two games as a member of the Bucs, the veteran is retiring from the NFL.
TAMPA, FL・1 DAY AGO