NewsTalk 1490 WERE is The People's Station and home to Reverend Al Sharpton and a variety of local Cleveland programming. 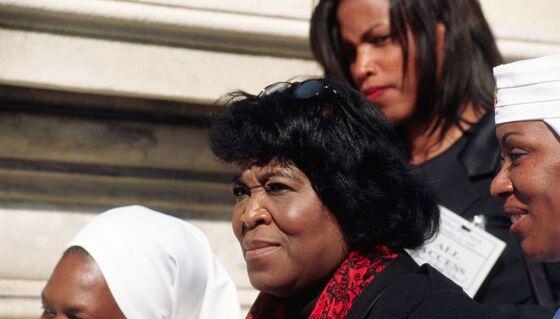 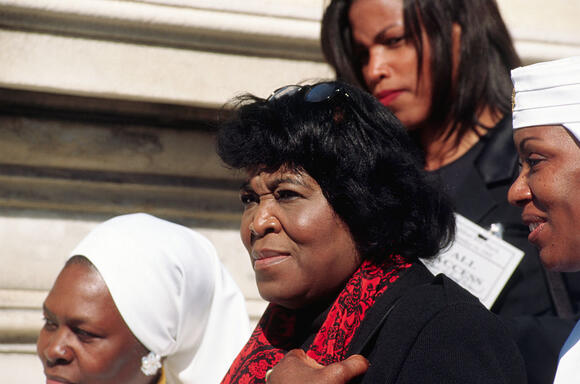 C arrying the responsibility of motherhood and widowhood, Dr. Betty Shabazz channeled her struggle and frustration into drive and passion. While some see her as the widow of Malcolm X ( El-Hajj Malik El-Shabazz ), Shabazz blazed trails of her own.

Juggling life as a single mother of six children alongside her commitment to education, Shabazz remains a powerful role model for anyone fighting to overcome tragedy. NewsOne honors Dr. Shabazz on May 28 and celebrates her life on what would have been her 88th  birthday.

While some records suggest Shabazz was born in Pinehurst, Georgia, she claimed Detroit as her home. According to her biography, as recorded by the National Park Service, Shabazz was born Betty Dean Sanders in 1934 to young parents Ollie Mae Sanders and Shelman Sandlin. Allegedly abused by her mother, Shabazz was later raised in Detroit by Lorenzo and Helen Malloy from age 11.

An influential African American couple, the Malloys were active in their community. But they largely kept talks of racism away from their young charge. According to her daughter Ilyasah , Shabazz grew up in the African Methodist Episcopal Church and participated in the Delta Sigma Theta Sprites in high school.

Following her dream of becoming a teacher, Shabazz left Detroit and attended the Tuskegee Institute (now University) in Alabama. There she encountered racism which interfered with her studies. She changed her major to nursing and was encouraged by school staff to head to Brooklyn State College School of Nursing in New York. In New York, she experienced racism of a different form.

She soon became introduced to the Nation of Islam after an invitation to a dinner at a Harlem temple. After a second visit, she would later hear and meet her future husband, Malcolm X. Ta ken by his presence at the podium, Shabazz would attend many of his lectures. It’s said that she and Malcolm often spoke afterward. After much prodding by the minister, Shabazz would convert to Islam in 1956.

Their courtship began shortly after that, often flanked by dozens of other individuals who served as chaperones, as was the custom. Although they had never discussed plans to marry, Malcolm X would eventually place a phone call and ask for a union. They were married on January 14, 1958, in Lansing, Mich.

Over the next seven years, the couple watched their family grow with the births of four daughters Attallah , Quibilah , Ilyasah , and Gamilah. When her husband was assassinated , Shabazz was pregnant with twins, Malikah and Malaak .

After the death of her husband, Shabazz found herself in dire straits. However, Alex Haley’s “The Autobiography of Malcolm X” had robust sales, and he gave his share of the royalties to the Shabazz family. Actress Ruby Dee and Juanita Poitier (then-wife of Sidney Poitier ) joined together in raising funds to buy the Shabazz family a home in Mount Vernon, N.Y.

After making a pilgrimage to Mecca and scrambling for means of income while raising six daughters, Shabazz enrolled in Jersey City Stage College (now New Jersey City University) in 1969. She earned her education degree in one year, and then entered a master’s degree program. In 1972, she attended the University of Massachusetts Amherst to obtain a doctorate in higher education administration and curriculum development.

Amid pursuing her education, Shabazz ensured her daughters had as many opportunities possible. On her website, Ilyasah shared that she and her sisters attended summer camps with Quaker and Native American values, music lessons and tutorials in Islam and the African diaspora.

But Shabazz didn’t melt into the background after Malcolm’s passing. She remained connected to political organizing in her own way. An iconic photo captured Shabazz alongside Democratic presidential nominee Rep. Shirley Chisholm , National Council of Negro Women President Dorothy Height, and Marion Anderson. 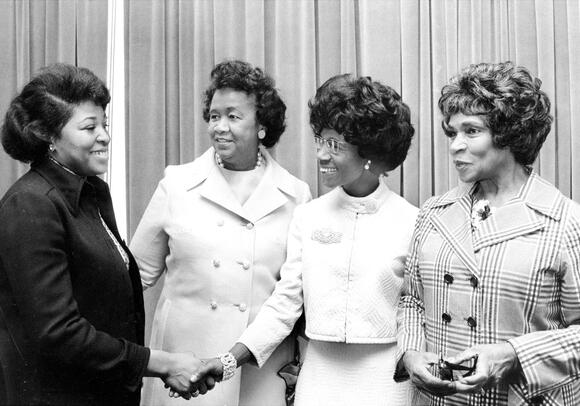 She commuted between Mount Vernon and the university for three years, later defending and earning her doctorate in 1975. The following year, she would become the associate professor of Health Sciences with a concentration in nursing at Medgar Evers College. In 1980, she led the health sciences department but was given a promotion by the school’s president and named the Director of Institutional Advancement. Excelling in her role, she was again promoted to Director of Institutional Advancement and Public Affairs in 1984.

Like her contemporaries, Coretta Scott King and Myrlie Evers, Shabazz was more than an extension of her deceased husband’s legacy. Author Rusell Rickford noted this in a 2004 book talk about his approach to capturing the essence of her life in the book “Betty Shabazz.”

“I discovered in researching Dr. Shabazz that it was a mistake to approach her life just in terms of Malcolm,” Rickford explained. “Pretty early on in the research, I realized that wasn’t going to work that this was a compelling, valuable story in its own right. That she was a fascinating figure in her own right. And that her story needed to be paid its respect.”

He found that her life post-Malcolm from 1965 to her death in 1997 mirrored “the victories and the defeats and the crises in the Black community” and with Black leadership. A mistake made by some mainstream sites in recounting her life and work is that she did not challenge white supremacy like Malcolm.

But her work to support Black communities and raise awareness on the “Black condition” did precisely that. Shabazz had a clear understanding of the struggle that lay ahead for Black people to pursue freedom.

She said it was essential to fight for the potential for freedom. Shabazz also recognized that people deserved to have their needs met regardless of vocation or station in life.

“Everyone is not going to be a doctor or lawyer,” she said. “The Universal Declaration of Human Rights states that every human being has a right to an education. Every human being has a right to a job suitable for the survival of himself and his family. And everyone has the right of proper and suitable housing. Why is it that the worst food, the worst neighborhoods, the worst schools [and] worst jobs are relegated to black people? This is not fair treatment. Black people are within their rights to resist oppression.”

She also said that white people who make up the power structure and Black people who are conditioned to accept the status quo see Black people who challenge the system as “trouble makers.” She said if the tables were turned, those who look down on people agitating for change would do the same thing to get what they deserved.

Next month marks 25 years since her tragic death after being caught in a fire reportedly set by her then-12-year-old grandson. After more than 2,000 people attended a funeral, Dr. Shabazz was buried next to her husband in Hartsdale, N.Y.

Although faced with odds that would break even the strongest person, Shabazz found a way to strive ahead and achieve great heights. She shined where many others have faltered. An honored ancestor, the late Dr. Betty Shabazz serves as a hopeful reminder that even tragedy cannot trump true determination.

OP-ED: Black Mothers Have Much At Stake In This Election Especially Autonomy And Freedom

America Was Founded On White Supremacist Violence. Dismantling It Requires A Shift In How We Approach Racism And Hate

Through the initiative, Techstars and JP Morgan aim to allocate over $80 million in funding to over 37 accelerators supporting diverse founders by 2025. The post Black-Led, DMV-Based Startups Receive Boost From Techstars Accelerator appeared first on NewsOne.
WASHINGTON, DC・7 DAYS AGO

NewsTalk 1490 WERE is The People's Station and home to Reverend Al Sharpton and a variety of local Cleveland programming.