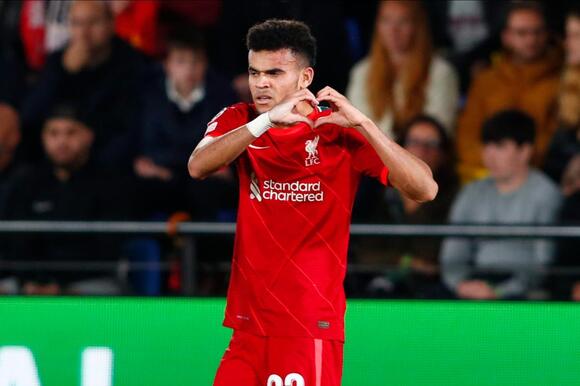 Luis Diaz is the star name to play for Liverpool this season coming from a very humble family background in Colombia's La Guajira.

Luis Diaz is the star name to play for Liverpool this season coming from a very humble family background in Colombia's La Guajira.

In the streets of Barrancas, Luis Diaz's images with his shirt number 23 are painted across the streets as a ray of hope and encouragement to the people across the country and within the footballer's community in Colombia.

The Colombian winger will play the Champions League final against Real Madrid in Paris today. Many faithfuls back home in the Latin American country will be hoping that Luis Diaz and his Liverpool team bring the European trophy back to Anfield.

According to the Guardian , the Liverpool winger's pet is named after Real Madrid midfielder and multiple UEFA Champions League trophy winner Toni Kroos. The Colombian creator will go up against the German midfielder in today's ultimate showdown to mark their names on the trophy ahead of the final in Paris.

As per the same report from the Guardian, the Diaz family's pet Toni Kroos will cheer for Liverpool and get excited for each and every goal that the Merseyside Reds score.

Despite joining the club in January, the former Porto winger has scored six goals and assisted thrice this season. Moreover, the Colombian has contributed widely in creating more chances up front on a consistent basis.

Recent reports in Germany have suggested that Liverpool and Borussia Dortmund have agreed a swap deal for the transfer of Jude Bellingham to Anfield.
PREMIER LEAGUE・1 DAY AGO
LFCTransferRoom

Liverpool midfielder on the radar of Bundesliga giants who could look to sign him on a free transfer next summer.
SOCCER・1 DAY AGO
LFCTransferRoom

Jurgen Klopp may have some decisions to make when Liverpool take on the Seagulls on Saturday.
PREMIER LEAGUE・7 HOURS AGO
LFCTransferRoom

The Liverpool defender was left out of the England squad for the UEFA Nations League clash against Germany on Monday with the World Cup looming.
SOCCER・2 DAYS AGO

A report from the Arsenal camp came out yesterday about promising Eintracht Frankfurt winger Jesper Lindstrom who is a key target for the London club. In a reported conversation with a Danish sports magazine recently he admitted to being a Liverpool fan..
PREMIER LEAGUE・8 HOURS AGO
LFCTransferRoom

Reports in Spain suggest that the Borussia Dortmund midfielder may have already made a decision about his future.
PREMIER LEAGUE・2 DAYS AGO
LFCTransferRoom

Inter Milan midfielder is 'very popular' amongst Premier League clubs according to a report.
PREMIER LEAGUE・13 HOURS AGO
LFCTransferRoom

The Sheffield United midfielder is admired by some of Europe's biggest clubs.
PREMIER LEAGUE・7 HOURS AGO

Report: Liverpool Past Interest In Moises Caicedo Cooled Due To Deal Concerns

Liverpool are reported to have been interested in Ecuadorian since well before his time at Brighton & Hove Albion.
PREMIER LEAGUE・1 DAY AGO
LFCTransferRoom

Jurgen Klopp Nominated For NWFA Manager of the Season

Liverpool manager Jurgen Klopp has been nominated for Manager of the Season in the Northwest Football Awards.
PREMIER LEAGUE・2 DAYS AGO
LFCTransferRoom

Match Report from Liverpool's 3-0 defeat to Everton in the Women's Super League at Anfield.
WORLD・2 DAYS AGO

Fans of Liverpool and just about every other team around the world have been waiting for months for the much-anticipated release of FIFA 23. It's being reported that there is a way to get the game a day earlier using a simple cheat.
FIFA・2 DAYS AGO
LFCTransferRoom

We bring you the details of how to watch Liverpool striker Diogo Jota in action for Portugal as they host Spain in the UEFA Nations League on Tuesday.
UEFA・1 DAY AGO
LFCTransferRoom

We bring you the details of how to watch Liverpool striker Luis Diaz in action as Colombia face Mexico in an international friendly at the home of the San Francisco 49ers.
PREMIER LEAGUE・1 DAY AGO
LFCTransferRoom

Recent reports emerging from Merseyside have suggested that Liverpool were unhappy with their last minute summer acquisition of Arthur Melo and were looking to ship him on as early as January. Here's what his agent Federico Pastorello had to say.
PREMIER LEAGUE・2 DAYS AGO
The Guardian

‘I want Lula back’: Brazil’s leftist veteran could be poised for comeback

A mural of the legendary composer Monarco welcomes revellers to the suburban base of one of Rio’s most beloved samba schools, Portela. But the crowds that flooded the building this week came to hear another silver-haired celebrity: Brazil’s former president Luiz Inácio Lula da Silva, who could be just days away from one of the most stunning political comebacks in recent history.
AMERICAS・17 MINUTES AGO