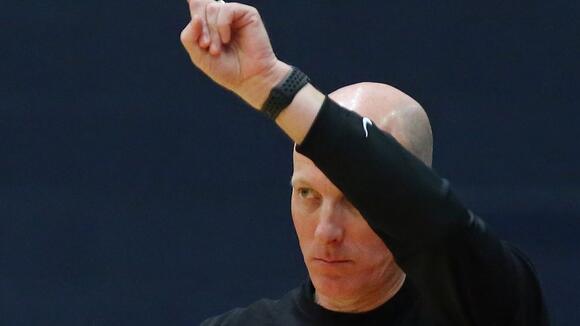 The NCAA opened the transfer portal in 2018 as a means to make the process of changing schools less cumbersome for college athletes.

In 2021, college’s governing body opened the floodgates with its “one-time transfer” rule which allowed players to compete immediately if they hadn’t transferred before.

Realistically speaking, it brought a form of free agency to college sports.

As of May 20, approximately 1,700 Division I basketball players nationwide were in the portal, according to the tracking site verbalcommits.com. Close to 2,700 football players decided to transfer prior to the May 1 deadline.

Several college coaches, including Clemson coach Dabo Swinney, have said changes are necessary to the system. Some in the media have suggested that perhaps the one-time transfer rule should be dialed back and undergrads should return to having to sit out a season after changing schools.

University of Akron basketball coach John Groce and football coach Joe Moorhead do not know if there is enough information yet to make alterations. Groce said he believes there should be a five-year window for looking at the current situation and the issues surrounding name image and likeness.

“People don't like change. But my disposition has been, hey, at the end of the day, it doesn't really matter whether I like it or don't like, it exists, it's in play, and so we have to figure out the very best way to navigate that. And so, that's what we chose,” Groce said during a phone conversation.

Moorhead said he accepts the reality of the portal as it currently exists and potential changes present with one exception.

“I think the biggest point of discussion ... (is) I think defining a time period of when the portal is opened and then when it's closed, as it pertains to the recruiting calendar and spring ball, would be something that might be a good idea,” Moorhead said.

That’s not to say the portal doesn’t present challenges in its current incarnation. Quite the opposite.

As the Zips men’s basketball team made its late-season run that resulted in an appearance in this year’s NCAA Tournament, those associated with the program were given scant time to enjoy it. Soon after the team’s loss to UCLA, a simple reality hit concerning the ability to keep the team together in its current form.

It couldn’t be done. The Zips lost four players to the portal. The one that may hurt the most is forward/wing Ali Ali, who eventually signed to play for Butler. The Zips’ leading scorer at 13.9 points a game, Ali's departure displayed just how vulnerable a sport such as basketball can be to transfers.

“Do I think that a couple of them would not have considered entering the portal if it was the old rule where you had to sit out a year first, unless you were a graduate?” Groce asked. “I don't think there's any chance they would have left, because they're having a great experience, they're a big part of the roster. I think certainly it entices guys more to leave, which obviously, you can say, does that make your job harder in terms of putting your team together? Yeah, I think it's certainly more challenging.”

Moorhead said, for him, the situation is more circumspect.

“I will say this, I can't answer that definitively, because this will be the first time I'm the head coach for a team where this opportunity is presented to the players,” he said. “So, hopefully we have enough success as a team, and consequently the players do individually, that we're a program that people say, ‘Hey, those guys are doing it the right way. They're having some success. Their players are doing well.’ And if that's a bridge we have to cross at some point, then we'll deal with it.”

Moorhead said he and his coaching staff looked for a 50-50 high school-transfer ratio in his first UA recruiting class.

“Because, I think when you go 100% into the portal game, you're losing the developmental foundation aspect of building a program,” he said. “So that's not something we ever want to get away from, and I think we did a real nice job with the 10 kids that we signed this past February.”

Groce said it’s forced him to look at his high school recruiting and how he considers his roster. Prior to the changes in rules, he looked at his roster in 4-5 year cycles. Prior to this season, he’d lose a guy here or there, and he calls his rate of retention good.

“But this is a completely different beast,” he said. “And so, it's made me think more about coaching one to two years at a time and trying to put roster or rosters together in a one- to two-year window, rather than a longer window.”

That may change – and soon. Apparently, the NCAA is looking to quell the chaos created by the portal and the one-time transfer rule, the one move Moorhead favors.

It would create two windows for student-athletes to enter the portal, one just after the end of the regular football season and the other in the spring.

Groce said he expects that proposal will eventually gather steam.

Reach George M. Thomas at gthomas@thebeaconjournal.com or on Twitter @ByGeorgeThomas.