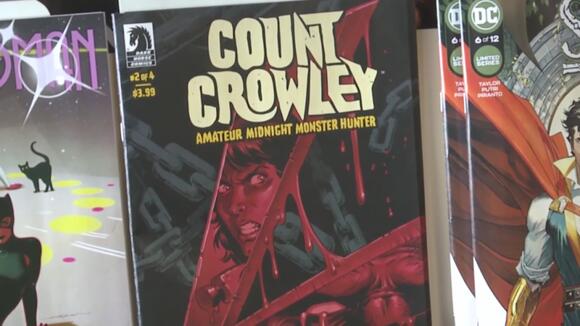 KANSAS CITY, Mo. — A Hollywood actor from the Kansas City area is trying his hand at comic books.

The series, Count Crowley, on shelves now is from the mind of David Dastmalchian. It tells the story of a television journalist who finds themselves in a rut and in a world full of monsters.

Dastmalchian is known for movies like Dune, Suicide Squad, and Blade Runner 2049. However, the Overland Park native is now taking his talents to the page with some Kansas City inspiration.

Inside the pages of a comic book your imagination comes alive. On the glossy pages of Count Crowley, Dastmalchian displays his spooky dreams.

“I gotta tell you, it’s been the dream of my life making this comic book, I just look at it every time and I’m like a 12-year-old kid again,” Dastmalchian said.

When Dastmalchian was a child he found a second home at Clint’s Comics South in OP which has since closed, but the original location is at the intersection of Main and Westport Roads.

“I found a place where I could just feel like I belonged and the stories that I loved and the characters that I loved, always enriched my life in my imagination,” Dastmalchian said.

The comic is on shelves everywhere, including B-Bop Comics North and South. Inside the cover Count Crowley stalks her prey and tells spooky stories over the airwaves.

“I think that’s what people want. Stranger things is like that I would say,” Mangiaracina said.

The series follows former television journalist Jerri Bartman as she struggles with substance abuse. She moves to a small imagined Missouri town where she has to face her fears along with a werewolf and monsters.

“It’s this fictional city that I kind of modeled after Columbia, and a little bit of Lenexa. It’s a smaller town in Kansas City. But there is a plotline coming, where there are some bigger city developments that are happening with a particular creature,” Dastmalchian said.

The actor and creator hopes to one day bring Bartman’s story to Kansas City for a live-action show or movie.

“I dream about getting a TV show or film made of Crowley at some point, and then we go and spend a couple years in Kansas City like making the show,” Dastmalchian said.

“I think everyone in town would love it,” Mangiaracina said.

For now, Dastmalchian will follow the series on the page and hopes you will stop by your local comic shop to pick up a copy.

“See how it feels to walk into a comic shop especially you haven’t been for a long time. It’s an incredible feeling,” Dastmalchian said.

There are two more issues of the series soon to be released. Dastmalchian said when you read them you will find some secret references to the metro.

📲 Download the FOX4 News app to stay updated on the go.
📧 Sign up for FOX4 email alerts to have breaking news sent to your inbox.
💻 Find today’s top stories on fox4kc.com for Kansas City and all of Kansas and Missouri.

Things to do this weekend in Kansas City: Sept. 30-Oct. 2

Here are just some of the events going on around Kansas City this weekend, Sept. 30 through Oct. 2.
KANSAS CITY, MO・2 DAYS AGO
FOX4 News Kansas City

Keshia Shannon says Fire and Ice Athletics is the only Black-owned USA Gymnastics program in the Kansas City area. They're celebrating one year.
KANSAS CITY, MO・18 HOURS AGO

Thursday is National Coffee Day! Many Americans will celebrate with a cup of joe, but will not be celebrating the price tag that comes with it.
KANSAS CITY, MO・1 DAY AGO
FOX4 News Kansas City

A homegrown tech company is getting ready to expand to other cities by expanding to a new metro neighborhood.
KANSAS CITY, MO・2 DAYS AGO
FOX4 News Kansas City

FOX4 News is working to help you save smart and get the best weekly grocery sales and deals through ads and extreme couponing.
KANSAS CITY, MO・1 DAY AGO
FOX4 News Kansas City

Smithville ranked No. 39 on SmartAsset's list of best suburbs to live in. Lenexa, Belton and Blue Springs were also in the top 200.
KANSAS CITY, MO・1 DAY AGO
FOX4 News Kansas City

Dozens of cars busted, broken into at Raytown apartments

Dozens of drivers woke up to a surprise at the Flats at Wildwood Apartments in Raytown, Missouri.
1 DAY AGO
FOX4 News Kansas City

A man is dead after he was found shot inside an apartment in the 2700 block of Benton Avenue of Kansas City, Missouri, Friday morning.
KANSAS CITY, MO・1 HOUR AGO

Officers from the Kansas City area stopped a car on K-7 and rescued a 3-year-old child who had been taken from Topeka overnight.
JOHNSON COUNTY, KS・2 HOURS AGO
FOX4 News Kansas City

A murder suspect at the center of a police chase through downtown Topeka, Kansas that lead to a shootout with police has been identified as someone from the Kansas City area.
TOPEKA, KS・14 HOURS AGO
FOX4 News Kansas City