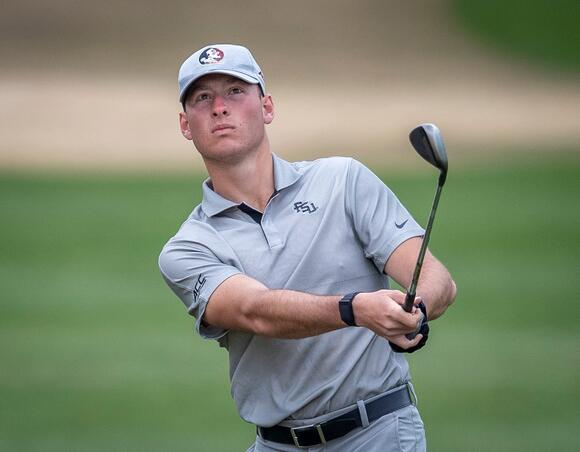 At 4-over par with four holes remaining in his opening round at the NCAA Regionals last week, Brett Roberts resuscitated himself with back-to-back birdies.

Finishing strong inspired Roberts to overcome his early struggles in the three-day event at the PGA National Resort in Palm Beach Gardens, Fla. So much so that the sophomore eventually became just the fourth Florida State men’s golfer to win an NCAA Regional.

With a 74 through his first 18 holes, Roberts left round one tied for No. 22 among the 80 golfers across 14 programs competing. He ascended to No. 1 after carding a 68 and 67 in the final two rounds, bringing him to an overall score of 7-under.

FSU baseball: Seminoles one win away from ACC Tournament semifinals after blowing out Virginia

The poise Roberts showed while bouncing back made sense when considering his even-keeled personality.

“We kid him that he looks like he’s about to fall asleep half the time,” Seminole head coach Trey Jones told the Democrat. “I don’t think the moment gets too big for him when you look at how he’s played in the bigger events. He has high expectations for himself. That definitely plays into who he is.”

As a team, FSU similarly recovered from a poor start. The Seminoles ended round one in eighth, posting an 9-over score of 297. Carding a 279 and 280 on the final two days, respectively, elevated FSU (856) to second behind Vanderbilt (844).

The Seminoles and Roberts will look to keep their momentum going when they compete against 29 other teams in the six-day NCAA Championships, which begin Friday at the Grayhawk Golf Club in Scottsdale, Ariz.

“We’ve been playing really well coming into this event,” Roberts said. “I like where everyone else’s game is at, not just me. Overall as a group, we do a good job feeding off each other whether it’s a practice round or off the course. Trying to get everyone in a good state of mind going into the tournament.”

Roberts helped FSU reach the match-play portion of the 2021 NCAA Championships before falling to eventual champion Pepperdine in the quarterfinals. This time, the Seminoles are aiming higher despite losing All-Americans John Pak and Vincent Norrman from last season.

The recent play of Roberts – along with his fellow starters in seniors Dan Bradbury and Michael Sakane, redshirt sophomore Cole Anderson and true sophomore Frederik Kjettrup – have the Seminoles optimistic about the rest of the postseason.

“They came here to compete and win,” Jones said. “We are not here for a participation trophy and to put a flag on the wall that says we played in this thing. They believe in themselves, and we believe in them. And I expect us to go out and play well.”

Roberts had never won a tournament in college.

Not only did Roberts land his first tournament victory on one of the biggest stages in college golf. But he also garnered the NCAA Regional title about 50 miles from where he grew up. Roberts spent most of his childhood living by Eagle Trace, a golf club in Coral Springs, Fla.

“It was awesome being able to experience that with a couple family members there,” Roberts said. “So my parents were there to be able to see it, my cousin, and I had a couple other friends there. It was awesome knowing that all the hard work I put in is starting to pay off.”

Sports run in the Roberts family. Brett’s cousin, Taylor Roberts, played on the FSU women’s golf team last season before transferring to Florida. Another cousin played football for the University of Ohio. That cousin’s sister plans to play lacrosse at Ohio State.

Brett’s older brother, Caleb Roberts, played baseball at North Carolina and is now part of the Arizona Diamondbacks organization. The two grew up competing against each other on Eagle Trace and at St. Thomas Aquinas High.

“We were butting heads over everything,” Brett said. “He used to play golf, too, so we’d have long-drive contests, closest to the pin, play nine holes or something. It was always very competitive.”

Experiencing that competition and living by Eagle Trace helped Roberts develop into one of the best high school golfers in the country. He ranked as high as No. 2 nationally among golfers in the 2020 recruiting class, per Junior Golf Scoreboard.

So it’s not surprising that Roberts has experienced success early in his Seminole career.

“And we really think Brett is going to build on this,” said Jones on Roberts’ recent win. “Brooks (Koepka) didn’t win his first tournament until his senior year. And once he did, he won three more. Brett already has one under his belt. So he’ll be better off the next time he gets the chance.”

In his first season at FSU, Roberts recorded top-nine finishes in three tournaments. His average score of 71.68 ranks fourth among freshmen and 24th overall in Seminole history. Roberts earned All-American honorable mention recognition from Golfweek and PING for his play.

This season, Roberts has continued to play well and elevate the expectations for the Seminoles.

“The first goal I want to accomplish before I turn pro is, I want to win a national championship as a team,” Roberts. “I feel like that would be something awesome that you could look back on for the rest of your life and see as such a big accomplishment.

The FSU men’s golf team arrived at the Grayhawk Golf Club in time to watch the women’s historic season come to a close earlier this week.

The women reached the match play stage of the NCAA Championships for the first time in program history before falling 3-2 to Texas A&M in the quarterfinals Tuesday. The Seminoles also finished with their highest-ever NCAA Championship finish, tying for fifth place in the national standings.

FSU cruised to the NCAA Championships after winning its second Regional Championship in program history. Placing sixth from their four rounds of stroke play advanced the Seminoles to a match-play showdown with the Aggies.

“They are a good group of girls,” Roberts said. “It was fun to watch them. Especially seeing the course that we are going to play and see what to expect when going out there. Seeing the course conditions, how the greens are reacting, how the rough is. And there are a couple new tee boxes out there for us.”