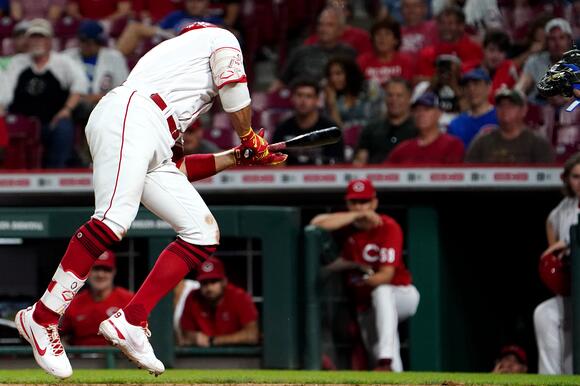 Cincinnati Reds first baseman Joey Votto exchanged words with Chicago Cubs relief pitcher Rowan Wick during the 8th inning of the Reds' 4-3 win Wednesday night at Great American Ball Park, but Votto did not want to discuss the exchange with Bally Sports Ohio's Jim Day on the field after the game out of respect for the victims of recent mass shootings in Buffalo, New York, and Uvalde, Texas.

Wick threw a pitch up and in during Votto's 8th-inning at-bat, and when Votto later walked, Wick appeared to use profanity in addressing Votto. Votto appeared to yell at Wick, a fellow Canadian, and at the Cubs' dugout.

"You know, today I really don't - I haven't felt in the mood to talk ball today," Votto told Day afterward on Bally Sports Ohio, when asked whether Wick said something to him. "I just wanted to say to Buffalo, to Uvalde, to communities that were affected by the recent shootings: We mourn with you. You know, it's unfathomable. And you have our love, you have our support. You know, we just got done enjoying a ballgame. But, you're not alone. We think about you. And you have our love and support. So that's all I really wanted to say tonight. It's been a wild stretch over the last little bit, and we're so sorry. Our condolences. My condolences. And again, you have our love. Thanks."

"You know, we were just - (Wick) had something to say, and I answered," Votto told reporters later. "And that's how ball is sometimes. You're competitive. And clearly he was competing and locked in on performing well. And I'm pulling on the opposite end of the same rope. And if someone says something to me, sometimes I don't answer. But I wasn't in the mood to keep my mouth shut. And you know, it's part of the game. It can be one of the more enjoyable parts of the game - you know competing, some talk. I really enjoy that part of the game. Sometimes it can be overextended, can be taken too far. But generally speaking, I enjoy that part as long as the other party is fine with taking it. You know, you give it to me, no problem. I'll (expletive) give it back."

After Reds reliever Hunter Strickland hit the Cubs' Patrick Wisdom in the 9th, Cubs manager David Ross was ejected for arguing with umpires.

"You don't put the tying run at the plate with one out," Votto continued, when discussing whether Strickland hit Wisdom on purpose. "That was absolutely unintentional. You know, we are trying to win a baseball game, and our closer's coming in - and he just misfires a ball. There's no - we don't get paid for retribution. We get paid to complete games, to perform well. And the idea that he did that on purpose in the 9th inning (leading by) two runs - what? And people have every right to think what they think. But it couldn't have been less intentional. And they may not accept that - hey, that's fine. No problem. We'll keep playing."

Jeff Brantley loved the Cincinnati Reds long before he was a pitcher for the team and even longer before he he started calling games in the team's broadcast booth. When Brantley was growing up in Alabama, he and his dad would listen to famed Reds' broadcasters Joe Nuxhall and Marty Brennaman calling the games while sitting in the family car, coasting up and down the driveway – it was the only way to get decent reception.
CINCINNATI, OH・8 HOURS AGO
Sportsnaut

Playoff pairing still in flux for Padres as they host Giants

CHICAGO – As the Cincinnati Reds fade further in September with a lowly offense, they saw one pitcher take a step back and one take a step forward Friday. Nearing the completion for one of the worst seasons in franchise history, the Reds’ outlook in the future is much more dependent on how their rookies in the rotation develop than the offensive woes that have plagued the club for the last three weeks. ...
CINCINNATI, OH・2 DAYS AGO
Cincinnati.com | The Enquirer

Reds first baseman Joey Votto wasn't able to play in Cincinnati's loss Friday to the Chicago Cubs at Wrigley Field as he continues his recovery from season-ending surgery, but he did offer a clever tweet earlier in the day about a Votto-themed audible the Bengals used during the fourth quarter of their win Thursday night against the Miami Dolphins.
CINCINNATI, OH・2 DAYS AGO

CHICAGO – Nick Lodolo made his way to the Major Leagues after pitching fewer than 70 innings in the minors, underscoring the need in the Cincinnati Reds’ rotation and Lodolo’s immense talent. Lodolo, who made his final start of the season Saturday at Wrigley Field, isn’t a finished product, but he showed why he is a pitcher the Reds plan to build their future rotation around. His last start was a fine example: He permitted two hits...
CINCINNATI, OH・1 DAY AGO
Cincinnati.com | The Enquirer

CHICAGO – As poorly as the Cincinnati Reds’ bullpen performed throughout the first half of the season, it’s been a positive for the club since the All-Star break. In the second half of the season, the Reds’ bullpen entered Saturday with the fifth-lowest ERA in the National League (3.68) and the fifth-best WAR (wins above replacement) in the Majors, according to FanGraphs.
CINCINNATI, OH・1 DAY AGO
Cincinnati.com | The Enquirer

As Reds near 100 losses, Cleveland Guardians avoid rebuild on path to division title

CHICAGO – The Cleveland Guardians were probably the biggest surprise throughout Major League Baseball this season, riding the youngest roster in the big leagues and fourth-lowest payroll to a divisional title. It wasn’t long ago when it seemed like they were teetering between a rebuild and remaining competitive, trading Francisco Lindor, Trevor Bauer,...
CINCINNATI, OH・16 HOURS AGO
Cincinnati.com | The Enquirer

CHICAGO – The Cincinnati Reds are playing October baseball, but nobody imagined it would be so unwatchable. Chase Anderson was chased out of the game after facing seven batters and recording only one out in his final start of the season Sunday at Wrigley Field. The Reds trailed by five runs at the end of the first inning.
CINCINNATI, OH・14 HOURS AGO

Take a look back at history through the front pages of The Cincinnati Enquirer. Every day we look at 10 pages that show the local, national and international headlines. Today’s pages cover news reported in The Enquirer on October 3 in years ranging from 1919 to 1990. Headlines include the Reds in the World Series in 1919 and 1940, the Bengals starting 5-0 in 1988 and actor Rock Hudson dying of AIDS-related illness in 1985.
CINCINNATI, OH・9 HOURS AGO