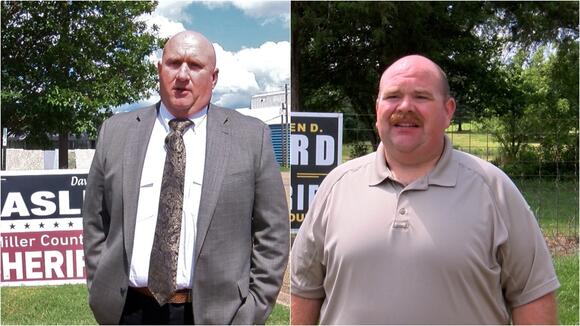 TEXARKANA, Ark. (KTAL/KMSS ) – Miller County natives Stephen Ward and Wayne Easley are headed to a runoff in the race for Miller County Sheriff.

Since neither candidate received most of the votes, Ward and Easley are set for a runoff in June.

On Wednesday, both candidates say they are confident about the race.

“I’ve lived in Miller county my entire life, my family lives here, I have children here raising their families here. I want the citizens of Miller County to be safe as well as I want my family to be safe,” said Easley. “If elected sheriff, I’ll be a proactive sheriff, not a reactive sheriff.”

Both candidates ran on the Republican ticket, with no Democratic challengers. This means the winner of the runoff will be the next sheriff and take office in January 2023.

The runoff election is set for June 21.

For the latest news, weather, sports, and streaming video, head to KTALnews.com.

Arkansas 911 board working to consolidate call centers in Texarkana

The additional space will include a multi-purpose education room and a commercial kitchen.
TEXARKANA, AR・9 DAYS AGO
KTAL News

Texarkana, Arkansas, police say around 2 pm Wednesday, an officer was dispatched to a house in the 3600 block of Garland Avenue to serve a warrant for 51-year-old Demarcus Weekly. The Pulaski County Sheriff's Office wanted Weekly on a felony burglary charge.
TEXARKANA, AR・15 DAYS AGO
KTAL News

TAPD: Man arrested after he’s “honest with them” about meth under passenger seat

After speaking with police McGough admitted to having more in his possession than the marijuana, telling officers he wanted "to be honest with them," and told officers about the ball of meth under the passenger seat.
TEXARKANA, AR・15 DAYS AGO
KTAL News

Police said they were dispatched to a Cadence Bank branch in the 2200 block of N. Stateline Ave after a caller witnessed a black Dodge pickup truck with a chrome bumper attempt to break into an ATM.
TEXARKANA, TX・19 DAYS AGO
KTAL News

A Texarkana man is looking for the owner of a woman’s anniversary ring he found at Walmart.
TEXARKANA, AR・22 DAYS AGO
KTAL News

This year’s theme is “Rollin’ Down Broad,” which showcases everything that Broad Street has to offer.
TEXARKANA, AR・17 DAYS AGO
KTAL News

The city of Texarkana is continuing to make improvements to its historic downtown area.
TEXARKANA, AR・23 DAYS AGO
KTAL News

The new Farmers Bank & Trust Workforce Center is opening just in time for the spring semester on the University of Arkansas’ Texarkana campus.
TEXARKANA, AR・22 DAYS AGO
KTAL News