Given how locked in their top offensive players have been since the AHL postseason began, it really wasn’t all that surprising when the Rochester Amerks jumped out to a first-period lead in Game 1 Sunday night against Laval.

What was very surprising is that it took 100 minutes, 35 seconds - spanning the remainder of Game 1 and most of Game 2 - before the Amerks could get another puck past Rocket goalie Cayden Primeau.

Primeau was the difference Monday night as he drove the Amerks batty during a 3-1 Laval victory in front of another big crowd at Place Bell and Rochester’s ill-timed short-circuiting of the offense has pushed it to the brink of Calder Cup playoff elimination.

They come home to Blue Cross Arena Wednesday night trailing the best-of-five North Division finals series two games to none and will have to win three straight if they hope to advance to the Eastern Conference finals.

Primeau stopped the final 18 shots he faced in Game 1 after JJ Peterka scored late in the first period, and then he stopped 31 of the 32 shots the Amerks fired Monday, several of the saves eye-poppers that left the Amerks looking into the rafters in disbelief.

“We haven't gotten enough traffic in front of him and we’re making it easy on him,” Amerks forward Mark Jankowski said. “Get pucks and bodies to the net … make it uncomfortable for him, stand on top of the crease, make sure he can’t get out, make sure he can’t see pucks and just try to pepper him as much you can and get second and third whacks at it.”

Here’s how it went down in Game 2:

First period: Laval picked up where it left off Peyton Krebs had the first good scoring chance of the game in the opening minute of play, but Primeau set the tone for the night as he turned it aside.

And then Aaron Dell did not do the same thing for the Amerks at 5:13 when he failed to control a rebound on a shot from the blue line by Tory Dello. Before defenseman Brandon Davidson could clear it out of harm’s way, Laval’s Brandon Gignac pumped it into the net for a 1-0 lead, Laval’s seventh straight goal going back to Game 1.

From then on, the Rocket ran circles around the Amerks and finished the period with a 17-7 advantage in shots, four coming on a power play after Jack Quinn took an undisciplined cross-checking penalty in the neutral zone, and if not for Dell, it could have been over early.

“We were on our heels in the first, you hate to get down, but I thought our second and third were real strong and that’s something to build on,” Appert said.

One thing Amerks coach Seth Appert said the Amerks had to do in Game 2 was limit the Rocket’s line rush opportunities, but that did not happen 4:55 into the second.

Laval sped into the zone with the Amerks scrambling to get back into position and no one seemed to be properly covered. Cedric Paquette moved in unimpeded and dropped the puck for a trailing Louie Belpedio and he wasted no time ripping a wrist shot from the left circle that beat Dell on his stick side for a 2-0 lead.

After that, the Amerks played much better and were able to generate several good chances, but Primeau was fantastic as he stopped all 14 shots he faced.

He was especially sharp in the final three minutes when he denied three shots during a Rochester power play, then robbed Lukas Rousek blind as he was all alone in front 16 seconds before the horn sounded. 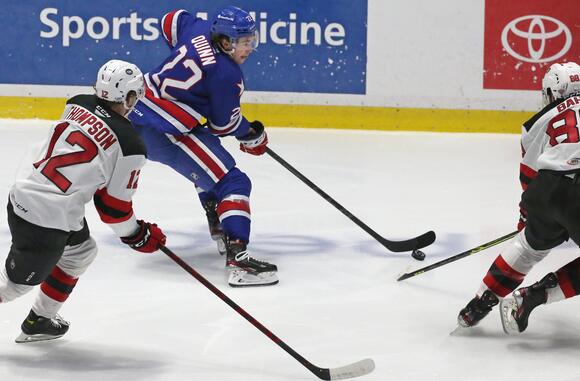 Remember how teams used to feel when they couldn’t beat the former Sabres great and Hockey Hall of Famer? Yeah, that’s how the Amerks must have felt by the end of the night.

Their frustration in not solving Primeau only grew more pronounced early in the third when they had several tremendous scoring chances during a frenetic power play, but again, Primeau was unbeatable. And then Quinn - clearly bothered by his lengthening scoring drought - canceled the final 37 seconds of the man advantage with another silly penalty.

With the teams skating four aside, the Rocket turned the puck over at their blue line and Arttu Ruotsalainen had a clear breakaway and, you guessed it, Primeau stopped him with his blocker.

The Rocket then put the game out of reach at 9:21. Dell stopped a shot by Peter Abbandonato, but three Amerks were caught on the right side as the rebound came out to the slot. Lucas Condotta was in the right spot, corralled it and had time to deke Dell and then beat him.

Finally, though, at 17:16, Ruotsalainen found a way to get one past Primeau just after a power play had expired to break Primeau’s shutout and end his scoreless streak. That also ended Laval's streak of having scored nine straight goals.

► Defenseman Oskari Laaksonen was in the lineup for the first time in the postseason. During the regular season, the Sabres third-round pick in 2017 had 34 points in 71 games, but he fell out of Appert’s circle of trust.

However, the coach was clearly looking for more speed against the Rocket as forward Brendan Warren and defenseman Josh Teves also dressed, while defensemen Peter Tischke and forwards Nick Boka and Ben Holmstrom were scratched.

► Danick Martel’s four-goal performance for Laval in Game 1 was the first of its kind in the Calder Cup playoffs since Greg Scott did it for Toronto in a 2013 game against the Amerks.

► The Game 1 loss by five goals was a first for the Amerks since 2003 when they were pounded 6-1 by Milwaukee in the deciding game of a best-of-three series.

► Ruotsalainen had his postseason scoring streak snapped at seven games when he was blanked in Game 1, but his late goal enabled him to remain atop the individual AHL scoreboard with nine goals and 12 points.

► The Amerks have not won a third-round playoff series since 2000 when they defeated Hershey to advance to the Calder Cup finals, the last time they played for the league championship.

► Appert on the predicament the Amerks are in: “You put your focus on recovery with another tight turnaround with the long bus ride, and then what we need to do Wednesday is to hold serve at home. It’s not a lost cause, just go home Wednesday and win one game.”

► Appert on the final two periods: “I thought we were real good in the second and third, did a lot of good things. Wasn't enough so we can’t be satisfied with that, but we created plenty, just didn't finish enough. We need to get more traffic on Primeau because he’s in a rhythm right now.”

► Amerks defenseman Brandon Davidson: “We just need to really not play like them, we need to play like us. There’s minor details all over the ice that need to be cleaned up but nothing huge. We’re just not in the sweet spot right now.”

The series now shifts to Blue Cross Arena for Game 3 Wednesday night at 7:05 p.m and if the Amerks don’t win that one, the season is over. Game 4, if necessary, is Friday night.