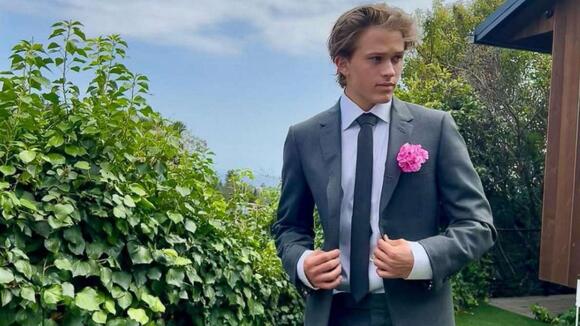 Phillippe, 18, took to Instagram to share a series of photos from his big night attending the high school dance. In the pictures, he is seen wearing a gray suit with a pink boutonniere, posing both solo and with others -- including, in one photo, dad Ryan Phillippe.

"Prom anyone??" Phillippe captioned the post, which garnered approval from older sister Ava Phillippe, who wrote in the comments that her brother was "looking sharp!"

Witherspoon herself commented on the post, complimenting her son's boutonniere.

Witherspoon shared her own photo of Phillippe to Instagram a day later.

"Love this guy," she wrote, tagging her son in the caption. The post received comments from fellow celebrity moms Rachel Zoe, Elle Macpherson and Kate Hudson, the latter of whom wrote, "What happened to our children?!?!?!"

Ryan Phillippe posted the photo of Deacon and himself in a now-expired Instagram story, writing, "Sending our sweet meat boi off 2 prom."

Both Witherspoon and Ryan Phillippe celebrated Deacon's 18th birthday in October. At the time, the "Cruel Intentions" co-stars, who were married from 1999 to 2008, reunited to mark their son's milestone birthday, posing together for a family photo with a giant birthday cake.

"We're lucky to be your mom and dad," Ryan wrote, adding, "I'd say we did pretty good @reesewitherspoon."

Reese Witherspoon is in celebration mode: Her youngest child, son Tennessee Toth, just turned 10. The "Legally Blonde" actress, 46, took to Instagram on Monday to mark her little one's special day. "Happy 10th Birthday to my wonderful boy, Tennessee!!" she wrote in the caption of her post. "Your brilliant...
CELEBRITIES・3 DAYS AGO
msn.com

Khloe Kardashian talks son's birth on 'The Kardashians': 'He has a lot of hair'

Khloé Kardashian gave "The Kardashians" viewers a behind-the-scenes look at the birth of her second child, a son, via surrogacy earlier this year during the show's season 2 premiere on Hulu Thursday. During the episode, Khloé's sister Kim Kardashian picked her up from her home on July 28 and...
CELEBRITIES・8 DAYS AGO
GMA

In a story from A to Z, Melanie Chisholm goes back to the days before Spice Girls.
MENTAL HEALTH・3 DAYS AGO

It looks like Sylvester Stallone and Jennifer Flavin are wasting no time in getting their love story back on track! Just a few weeks after a divorce was on the table — after 25 years of marriage! — the couple reconciled and were spotted for the first time out together on Thursday (September 29) in Calabasas. Sylvester and Jennifer appeared to be in great spirits chatting on a bench while the Rocky actor put his hands on the former model’s leg.
CALABASAS, CA・52 MINUTES AGO
GMA

Find out how Gabby Windey and Rachel Recchia's "Bachelorette" journey came to an end on the season 19 finale.
CELEBRITIES・9 DAYS AGO
GMA

Why butter boards are the latest viral food trend

Butter boards started with Justine Doiron who spread some butter on a wooden board and topped it with salt, herbs and more.
FOOD & DRINKS・3 DAYS AGO

"Because of the way it was done, is very upsetting," she said.
CELEBRITIES・1 DAY AGO
GMA

Brad Pitt is breaking into the world of beauty. The actor, who turned heads earlier this year while donning a brown skirt suit at the "Bullet Train" premiere in Berlin, has launched a brand new skincare line in partnership with the famed Château Beaucastel wine growers of the Perrin family.
SKIN CARE・8 DAYS AGO
GMA

'The Bachelor' season 27 to star Zach Shallcross: 'I am ready to find my person'

Ye opens up about co-parenting with Kim Kardashian, fatherhood, Donda Academy and more

Ye said he has "new respect" for ex-wife Kim Kardashian and felt sorrow for causing stress in the relationship since Kardashian filed for divorce in February 2021. "This is the mother of my children, and I apologize for any stress that I have caused, even in my frustration, because God calls me to be stronger," Ye, the recording artist and entrepreneur formerly known as Kanye West, said in an exclusive morning interview that aired Thursday on "Good Morning America." "I need this person to be less stressed and of the best, sound mind and as calm as possible to be able to raise those children at the end of the day."
FAMILY RELATIONSHIPS・8 DAYS AGO

A new clip from the upcoming film "Glass Onion: A Knives Out Mystery" was released over the weekend.
MOVIES・4 DAYS AGO
GMA

"I am the luckiest Mama in all the land," she wrote on Instagram.
CELEBRITIES・6 DAYS AGO
GMA

John Stamos opened up about losing Bob Saget and what he learned from his friend's sudden death.
CELEBRITIES・3 HOURS AGO
GMA

"Full House" alum Lori Loughlin booked a role in the TV movie "Fall Into Winter," her first film role since her prison stint for the college admissions scandal.
MOVIES・7 DAYS AGO
GMA

The sequel to the iconic film is out Friday, September 30, on Disney+.
MOVIES・1 DAY AGO
GMA

Selma Blair reflects on her 'DWTS' debut: 'It burst my heart open'

Selma Blair reflected on her "Dancing with the Stars" debut in an interview with "Good Morning America."
CELEBRITIES・4 DAYS AGO
GMA